“Now is the time to act”: John Lewis calls for Trump’s impeachment 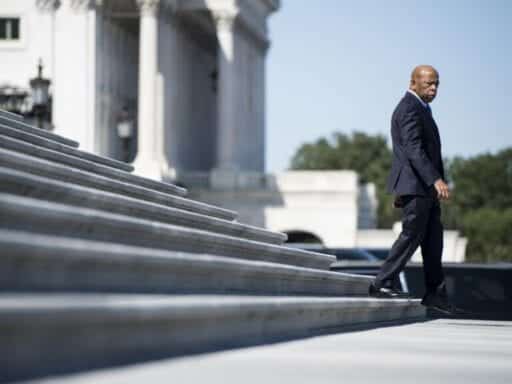 Share
Loading...
John Lewis walks down the steps of the US Capitol in September 2019. | Bill Clark/CQ-Roll Call/Getty Images

“I have been patient,” Lewis said in a speech on the House floor. But now he says, “We cannot delay. We must not wait.”

Civil rights icon Rep. John Lewis (D-GA) called for the impeachment of President Donald Trump in a dramatic speech on the floor of the House of Representatives on Tuesday, giving voice to a growing list of House Democrats calling for an inquiry into the president’s interactions with a foreign leader.

“I have been patient while we tried every other path, and used every other tool,” Lewis said. “We will never find the truth unless we use the power given to the House of Representatives, and the House alone, to begin an official investigation as dictated by the Constitution.”

BREAKING: Rep. John Lewis calls for impeachment proceedings against President Trump: “We must not wait! … To delay or to do otherwise would betray the foundation of our democracy.” pic.twitter.com/2w1RpfkcIk

Lewis said he understood the importance of caution, and said there is a time and place for the sorts of investigations into possible presidential misconduct currently underway in the House Intelligence and Judiciary committees. But he expressed frustration with the pace of that work, and said he was swayed to support the start of impeachment, and not just by Trump’s actions on a July call with Ukraine. (In that call, the president has said he brought up Joe Biden with Ukraine’s president, and some lawmakers fear he pushed that country to investigate the former vice president, despite there being no evidence there is any basis for an investigation.)

And the representative also argued that, although the Justice Department may state that a sitting president cannot be indicted, Congress must prove that the president is nevertheless bound by laws: “The people of this nation realize that if they had committed even a half of the possible violations, the federal government would be swift to seek justice. We cannot delay. We must not wait. Now is the time to act.”

House Democrats are increasingly on board with impeachment

This all comes as a whistleblower’s complaint has raised questions about whether President Donald Trump used the power of his office to attempt to influence a foreign country to meddle in the 2020 election.

Some Democrats, like Sen. Elizabeth Warren, have long been in favor of impeaching Trump on the basis of the revelations of potential obstruction of justice contained in the Mueller investigation. Others, like House Speaker Nancy Pelosi, have been cautious about endorsing that strategy.

But after a group of moderate first-term lawmakers in swing districts began calling for an impeachment inquiry in a Washington Post op-ed, Democrats plan to meet Tuesday afternoon to discuss the caucus’ official stance on impeachment.

Trump maintains he’s done nothing wrong, and has said he “had every right to” bring up the former vice president on his call with Ukraine because “we don’t want a country that we’re giving massive aid to to be corrupting our system.”

Whether Lewis’s words moved anyone sitting on the fence remains to be seen. But even before his speech, pro-impeachment momentum was building. Presidential candidates Warren and Sen. Kamala Harris explicitly renewed their past calls for impeachment last weekend. Other senior House lawmakers like Rep. Adam Schiff who have been hesitant to support an impeachment inquiry have also signaled they’ve changed their thinking.

More will become clear following Democrats’ meeting Tuesday evening. But even if Democrats in the House do decide to begin impeachment proceedings, it’s unlikely the move will result in Trump’s removal from office.

Not only has polling — admittedly taken before news of the whistleblower was public — shown the majority of the American public does not support impeachment, but Republicans in the Senate have shown no interest in breaking with Trump. Unless they do, Trump will remain in office, even if he attempted to solicit foreign interference in a US election.

A rush transcript of Lewis’s speech is below:

Today, I come with a heavy heart, deeply concerned about the future of our democracy. And I’m not alone. People approach me everywhere I go, whether I’m traveling back and forth to — traveling back and forth from Atlanta or around our country. They believe that our country is descending into darkness. They never dreamed that the United States, once seen as a beacon of hope, and as an inspiration for people striving for equality and justice will be failing into such disgrace.

I share their concerns for the future of our country. It keeps me up at night. We took an oath to protect this nation against all domestic enemies and foreign enemies. Sometimes, I’m afraid to go to — I am afraid to go to sleep and I will wake up and our democracy will be gone and ever be returned.

Every turn this administration demonstrates disdain and disregard for the law and for the constitution. They have lied under oath. They refuse to account for their action and appear before the legislative body who have the constitutional right to inquire about their activities.

Mr. Speaker, the people of this nation realize that if they had committed even half of the possible violations, the federal government would be swift to seek justice. We cannot delay. We must not wait. Now is the time to act.

I have been patient while we have used every other path and tool. We will never find the truth unless the user power given to the house of representatives and the house alone to begin an official investigation as dictated by the constitution. The future of our democracy is at stake.

There comes a time when you have to be moved by the spirit of history to take action to protect and preserve the integrity of our nation. I believe, I truly believe the time to begin impeachment proceedings against this president has come. To delay or to do otherwise would betray the foundation of our democracy.

The US needs more urgency on developing a coronavirus vaccine
1 in 3 Black Americans knows someone who died from Covid-19. These stories capture the toll taken by...
Vox Sentences: Mar-a-Lag-Oh-No
Walmart’s Amazon Prime competitor will launch in July
Steve Bannon has just been arrested on fraud charges
How the new Covid-19 variants could pose a threat to vaccination