Now with more money than anyone else, Elon Musk faces a new challenge: How to give it away 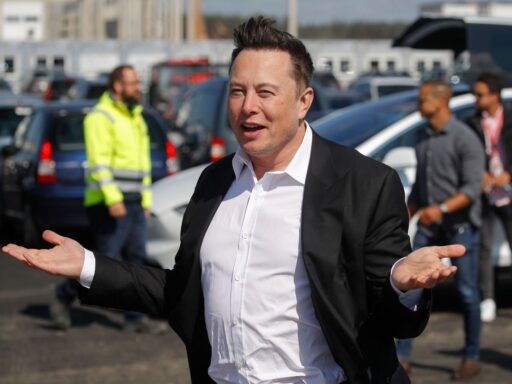 More scrutiny than ever will be on Musk’s philanthropy, now that he’s the richest person in the world.

The richest person in the world would like your help giving away his billions of dollars.

One of the first things that Elon Musk, the founder and CEO of Tesla, did upon climbing to the top of American capitalism last week was to ask for any advice about how to climb the ranks of philanthropy. Now that he has more money than anyone else on the planet, Musk is likely to come under far greater scrutiny than he ever has about how he gives it away — or doesn’t.

Amazon founder Jeff Bezos, who Musk displaced from the top-ranking, drew more and more negative attention for his penny-pinching philanthropy as he became wealthier and wealthier, and Musk will probably encounter a similar dynamic. Bezos turned to Twitter for advice as that scrutiny mounted, and Musk is following the same playbook.

Btw, critical feedback is always super appreciated, as well as ways to donate money that really make a difference (way harder than it seems)

Musk’s tweet lays bare two truths: He is certainly correct that billionaire philanthropy is difficult — many of his fellow tech titans have struggled to give away their money effectively. But it’s also true that many billionaires have declined to give away large amounts of their money — partially out of fear of screwing up at making a difference — and that describes Musk’s own giving up to this point. Musk has given relatively small amounts of his wealth, a history that his tweet and his rise to top-billionaire status is highlighting.

Musk’s main charitable vehicle has been the Musk Foundation, which he founded back in 2002. In an age of philanthropic showmanship, the Musk Foundation is almost entertaining in its simplicity and yet is strikingly opaque: The entire website is 33 words on a plain-text Yahoo page with no links, staff information, or contact forms (“I wrote that masterpiece myself in HTML 1.0,” Musk said at one point.) All that is included are five bullet points outlining the fields that the foundation supports.

Musk has also signed the Giving Pledge — the commitment to give away at least half of one’s money to charity — but he is one of its few signatories not to make their pledge letter publicly available on the program’s website.

The main place where Musk has been more voluble, naturally, is on Twitter, where he periodically reveals tidbits about his philanthropic thinking to Tesla fans who beseech him for gifts or details. Sometimes he’ll promise to award money from his foundation to followers who tweet at him.

Until 2016, Musk gave relatively little money to his foundation which then gave little to nonprofits, according to the tax filings that foundations must file. Then, in May 2016, Musk donated $250 million in Tesla stock to his foundation, but that money has also been slow to get out the door. And so during the 16-year period between the foundation’s founding in 2002 and mid-2018, the last year on file, the philanthropy has only given about $25 million directly to nonprofit groups, with $10 million of that going to support OpenAI, a nonprofit founded by Musk and entrepreneur Sam Altman.

After 2016, the foundation routed about $50 million to donor-advised funds (DAFs), which are separate philanthropic vehicles that don’t disclose their gifts and also allow foundations to circumvent a requirement to send 5 percent of their assets elsewhere every year. A Musk spokesperson told Forbes last year that those DAFs had donated a total of $75 million over their lifetimes to nonprofits.

That $75 million, when combined with his foundation’s $25 million worth of direct gifts through 2018, means Musk has given away about $100 million to charity through his foundation and his DAFs (This figure doesn’t include money possibly donated by his foundation after 2018 or money donated not through a foundation or DAF.) That math works out to Musk donating about 0.05 percent of his current net worth to charity so far. That figure also tracks with what Musk has said publicly — in 2018, he said that he had sold about $100 million worth of Tesla stock to finance his charity.

Representatives for Musk didn’t respond to Recode’s request for comment.

Because around three-quarters of Musk’s donations to date have come through DAFs, which don’t have to file similar public tax documents, it is harder to track what specific nonprofits he is supporting. That’s somewhat intentional: Musk has said his grants are “(almost always) anonymous,” although that would only be technically true for donations from outside the walls of the foundation (though Musk has said incorrectly that his foundation donations are “anonymous,” too.)

There have been some announcements of major gifts from grantees, though. In addition to the $10 million from the foundation to OpenAI, Musk donated at least $10 million to the Future of Life Institute, which researches safety in artificial intelligence; $10 million for a prize focused on promoting global literacy; and $6 million to the Sierra Club, a donation that was originally anonymous and then made public after Musk encouraged the organization to do so. Musk has also said that he is “one of the top donors” to the American Civil Liberties Union, without disclosing a precise amount.

But those donations all happened at a quainter time in Musk’s wealth history. Just a year ago, Musk was testifying under oath that he was worth about $20 billion, although like other billionaire tech founder, most of that money resides in illiquid stock that a CEO is often reluctant to sell. Now, Bloomberg estimates his net worth as over 10 times that.

And as the world’s wealthiest person, more eyeballs will be on his every move. Progressive activists and politicians have increasingly turned their ire on a few high-profile billionaires — sending a guillotine to Bezos’s mansion at one point, for instance — as a way to criticize American income inequality. Billionaires, though, have used their philanthropy as a counterargument to higher taxes that would close inequality, pointing to the good they are doing today for the world with the fortunes.

Musk, who has bristled at the label “billionaire” and recently moved himself and his foundation to Texas, has said that his big philanthropic investments though are still decades away, which could frustrate the left. The entrepreneur has said that while he would sell some more Tesla shares “every few years” for philanthropy, “major disbursements” from his charities will only come in about 20 years, “when Tesla is in steady state.” That would be around when Musk is nearing 70 years old.

But he does appear to have a clear idea of how he wants to spend his fortune at that point. He has already outlined two broad buckets for his wealth: Half for Earth, and half for Mars.

“Will use that to make life multiplanetary, help education & environment on Earth w my foundation. Just don’t want us to be sad about the future,” he said of his wealth back in 2018. “About half my money is intended for problems on Earth, half to help establish a self-sustaining city on Mars to ensure continuation of life in case we get hit by a meteor or WW3 happens & we destroy ourselves,” he told another follower a few months later.

He’s already starting to make some more gifts. On Friday, Barstool Sports announced that Musk had made a fund that it organized to support by Barstool Sports for small businesses.

Musk is not as showy with his material comforts as other tech billionaires — he is in the process of selling all of his homes, and has not displayed the same taste for yachts or other trifles. From Musk’s point of view, he’s saving up.

“It’s going to take a lot of resources to build a city on Mars,” he told an interviewer last month. “I want to be able to contribute as much as possible.”

Who’s who in the impeachment hearings on Ukraine
Trump’s demand for Ginsburg and Sotomayor to recuse themselves, briefly explained
Democratic women swept key House primary runoffs in Georgia
The Joe Rogan controversy revealed something important about the American left
Bloomberg plans to make a secret pitch to Silicon Valley billionaires, showing he’s not afraid to sc...
The right-wing populist wave is a threat to the climate