Nude photos raised over $1 million for the Australia fires 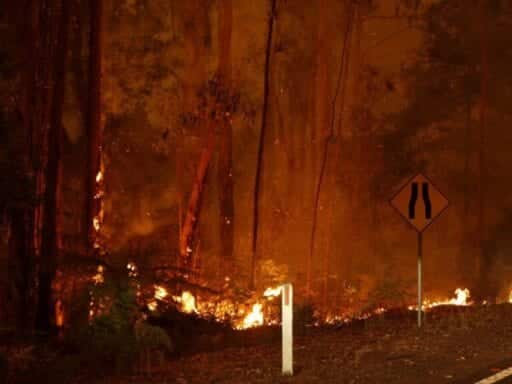 Share
Loading...
Bushfires have destroyed more than 15 million acres in Australia, and officials say some blazes could continue for months. | Darrian Traynor/Getty Images

A series of devastating wildfires have burned millions of acres in Australia. Across the continent, an estimated 1 billion animals have been killed, and fire officials say some individual blazes will continue burning for months. As the crisis garnered global attention this past week, a 20-year-old model has gone viral for incentivizing her followers to donate to approved Australian charities — by sending fans explicit photos for every $10 they give, provided they send her confirmation of the donation.

Kaylen Ward, a California resident who calls herself the Naked Philanthropist, has raised, by her estimates, more than $1 million in contributions to Australian charities and evacuation centers, such as the Australian Red Cross and WWF (formerly the World Wildlife Fund). Ward told the Guardian that since she had a dedicated follower base from modeling and selling nude content, she hoped to urge them to contribute money to the fire relief efforts.

Within hours of Ward’s post on January 3, she started receiving an influx of direct messages with donation receipts totaling up to $5,000. Two days later, Ward announced the amount had gone up to $300,000, and on January 6, donations had surpassed $1 million. (Ward did not respond to an emailed request for comment from Vox and is no longer accepting any more donation verifications.)

Ward said on Twitter that she paid a team of people to help filter through messages and verify the thousands of donation receipts she’s received. She has discovered some duped images, and some of her nudes have been publicly leaked, but Ward has received massive online exposure for her fundraising strategy.

She has gained more than 250,000 Twitter followers and launched a partnership with OnlyFans — a platform where fans can pay a monthly fee to view special, sometimes not-safe-for-work content — where 20 percent of her earnings will be donated to the Australian fires. Ward is the first influencer that OnlyFans has partnered with for a charitable cause, according to Steve Pym, the platform’s head of marketing.

“While other platforms have shut Kaylen Ward down, we decided to step in and give our full support towards this great cause,” Pym wrote to Vox in an email. “This also felt like the right thing to do as a company. We care about the environment and the bushfires in Australia are also directly affecting members of our extended global OnlyFans family.”

(Public attention also led Ward’s Instagram to be deactivated over the weekend, as a result of posting sexually suggestive content.)

The psychology behind what motivates a person to give money is complex. The severity of Australia’s wildfires has inspired millions in donations, but these dollars aren’t able to directly relieve the impacts of climate change — which created the harsh tinderbox conditions that worsened the fires. Donations are likely helping residents who are affected, wildfire conservation efforts, and firefighters on the front lines.

Ward’s individual fundraising success could be a result of multiple factors, including her popularity on Twitter, the timing of her post, and the dire reports on the state of Australia’s wildfires.

I’ve decided to start my own organization who’s proceeds go to charities. If you are a girl and want to be a “naked philanthropist” and sell your nudes for a good cause, email me and include your name and twitter or IG handle. Serious inquires only
kaylenwork@outlook.com

As users on Twitter like to point out, not all heroes wear capes. Some don’t even wear clothes.