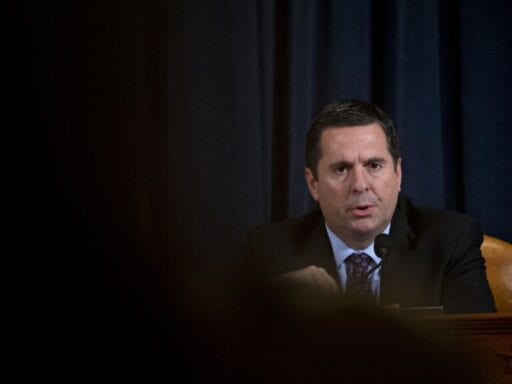 During a Sunday morning appearance on Maria Bartiromo’s Fox Business show, House Intelligence Committee Ranking Member Devin Nunes (R-CA) threatened to sue CNN and the Daily Beast for publishing pieces about him based on statements they received from lawyers representing an indicted associate of Rudy Giuliani. There’s just one problem: Nunes doesn’t seem to understand how lawsuits work.

Nunes, who in an ironic twist once co-sponsored the “Discouraging Frivolous Lawsuits Act,” has a long history of filing frivolous lawsuits. He’s sued people who are mean to him online (including a parody Twitter account that goes by “Devin Nunes’ cow”), constituents who asked the state of California to not allow Nunes to identify himself as a “farmer” on the ballot, and publications for doing basic reporting on him. But even in that context, his latest threat against CNN and the Daily Beast is flimsy.

At issue are reports the Daily Beast and CNN published last week about statements made by two lawyers representing Lev Parnas, an associate of Rudy Giuliani’s who was recently indicted for campaign finance violations and played a key role in Giuliani’s shadowy Ukrainian diplomacy.

In a report published Thursday, lawyer Ed MacMahon told the Daily Beast that Parnas “helped arrange meetings and calls in Europe” for Nunes during a congressional trip there last year. The next day, CNN advanced the story by reporting that according to another lawyer representing Parnas, Joseph Bondy, his client is willing to tell Congress that he helped arrange a meeting in Vienna between Nunes and disgraced former Ukrainian Prosecutor General Victor Shokin. (Shokin was pushed out as the country’s top prosecutor in May 2016 after then-Vice President Biden and other world leaders urged the Ukrainian government to do so, citing Shokin’s failure to curb corruption in the country. Shokin has since claimed, without evidence, that Biden’s real motivation was curbing an investigation into a company at which his son Hunter served as a board member.)

“Parnas says he worked to put Nunes in touch with Ukrainians who could help Nunes dig up dirt on Biden and Democrats in Ukraine, according to Bondy,” CNN reported — a revelation that, if true, indicates Nunes isn’t in a position to be an impartial broker as the top House Republican involved in impeachment hearings about Trump and Giuliani trying to leverage the Ukrainian government into announcing investigations aimed at discrediting Joe Biden.

On Sunday, Bartiromo asked Nunes a very straightforward question — “Were you in Vienna with Shokin?” — but instead of answering, Nunes railed against the media and threatened to get litigious.

“I really want to answer all of these questions … but because there is criminal activity here, we’re working with the appropriate law enforcement agencies, we’re gonna file all this — everyone is gonna know the truth, everyone is gonna know all the facts — but I think you can understand that I can’t compete by trying to debate this out with the public media, when 90 percent of the media are totally corrupt,” Nunes said.

He continued: “And because this is criminal in nature, and because it’s so bad, it’s so slanderous, we’ve got all the facts on our side, and we’re going to file in federal court, because I’m not gonna sit here and try to compete against the media that I have no chance of winning with. I will win in court, and they’ll have a chance to cooperate, and they’ll have to show how they work with someone who has been indicted, which is likely conspiring to obstruct justice.”

Bartiromo then asked Nunes, “Just to be clear, you’re saying you’re suing CNN, you’re suing the Daily Beast — I know you’ve sued Twitter in the past — do you think this is going somewhere? You’re telling me that CNN committed criminal activity?”

Nunes hedged his bets a little bit but indicated that, yes, he thinks the outlets reporting on statements made by a lawyer is criminal.

“Well, it’s very likely, or they’re an accessory to it, right? So none of this is true,” Nunes said, going on to say that “my statement is” that the stories are “demonstrably false.”

BARTIROMO: Were you in Vienna w/Shokin?

NUNES: Because there is criminal activity here, I’m not going to sit here & try to compete against the media

B: To be clear, you’re telling me CNN committed criminal activity?

N: It’s very likely, or they’re an accessory to it, right? pic.twitter.com/epHJN0V7gK

To successfully sue, Nunes will need some evidence the reporting is false

Based on his rambling response to Bartiromo, it’s not clear whether Nunes is denying that he met with Shokin in Vienna. That’s key because assuming Nunes wants to sue CNN and the Daily Beast for defamation, he’d have to prove that the outlets not only made a false statement of fact about him but also that they had malicious intent in doing so.

But the Daily Beast and CNN stories do not categorically say that Parnas helped arrange meetings for Nunes during his European trip — they simply convey information provided by lawyers representing him. So unless the outlets were just making stuff up about their conversations with the lawyers, they have little to worry about.

Not only does Nunes have a history of filing frivolous lawsuits, but in his zest to do Trump’s bidding, he’s repeatedly gotten himself in trouble by getting directly involved in the president’s scandals.

In March 2017, shortly after Trump posted an unsubstantiated tweet accusing the Obama administration of wiretapping him, Nunes traveled secretly to the White House for a briefing on Russia-related intelligence that he then used to gin up a “scandal” surrounding the Obama administration’s surveillance practices. But the information Nunes publicized was classified. An ethics review eventually cleared him of wrongdoing, but not before the unauthorized disclosure resulted in Nunes temporarily recusing himself from his committee’s probe into Russia interference.

Then, last year, Nunes’s much-hyped memo that was supposed to demonstrate anti-Trump bias in the FBI turned out to be a total dud. And his performance during last week’s impeachment hearings has been criticized for being more focused on creating soundbites for Fox News than it was on the substance of witness testimony.

Devin Nunes does not look thrilled as Swalwell reads into the record a story about his ties with indicted Giuliani associate Lev Parnas pic.twitter.com/n0jR2gKgvj

What Nunes didn’t mention at all during the hearings was that he reportedly was involved in the very efforts to dig up dirt on the Bidens that the inquiry is scrutinizing. And on Sunday, CNBC, citing comments from Parnas’s lawyer Joseph Bondy, reported that Nunes canceled a planned trip to Ukraine earlier this year “to interview two Ukrainian prosecutors who claimed to have evidence that could help [Trump’s] reelection campaign” when he realized that he would have to notify House Intelligence Committee Chair Adam Schiff (D-CA) about it. That story suggests Nunes’s efforts to help Trump dig up dirt on the Bidens continued even after his travels in Europe last year.

If the Daily Beast, CNN, and CNBC reports are true, Nunes played a much more active role in Trump’s shadowy efforts to leverage Ukrainian diplomacy into opposition research on Joe Biden than was previously known. As House Armed Services Committee Chair Adam Smith told MSNBC’s Joy Reid on Saturday, the revelation could lead to Nunes facing his second ethics allegation in less than three years.

The new reports aren’t necessarily surprising, given Nunes’s long history of doing Trump’s bidding. But what is somewhat galling is that a top Republican in Congress would think people are stupid enough to believe that outlets reporting on his ties to Ukraine would be in legal jeopardy. Notably, however, Bartiromo didn’t push back at all on Nunes. Instead, she took his threats to sue the Daily Beast and CNN at face value.

Why these scientists still doubt the coronavirus leaked from a Chinese lab
Iranian women watched the World Cup in a stadium for the first time in nearly 40 years
The 3 best new movies out this weekend
A New Year’s resolution for everybody: cook more
Republicans want to out the whistleblower because they can’t defend Trump on the merits
House Republicans were still fixated on the whistleblower at this week’s impeachment hearing