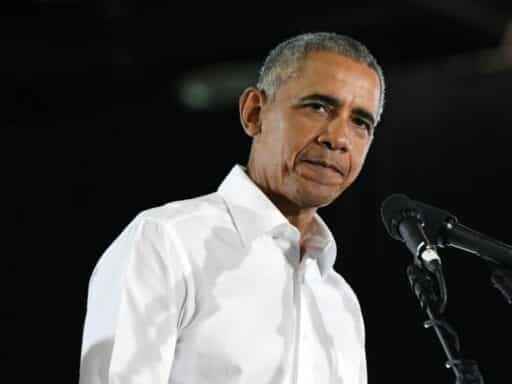 Share
Loading...
Barack Obama speaks during a get-out-the-vote rally at the Cox Pavilion as he campaigns for Nevada Democratic candidates on October 22, 2018, in Las Vegas. | Ethan Miller/Getty Images

“No other developed nation tolerates the levels of gun violence that we do.”

Former President Barack Obama called for more gun control and condemned racist rhetoric — including from “our leaders” — in the aftermath of the mass shootings in El Paso, Texas, and Dayton, Ohio, over the weekend.

“We are not helpless here,” Obama wrote in a statement posted on Twitter. “And until all of us stand up and insist on holding public officials accountable for changing our gun laws, these tragedies will keep happening.”

Obama pointed out that America’s gun violence problem is unique among developed nations. As Vox’s German Lopez reported, the US’s gun homicide rate was 21 times that of Australia and six times that of Canada. The second-highest gun homicide rate, in Switzerland, was still seven times less likely to experience gun homicides. Obama wrote that some of these deaths can be prevented with tougher gun laws, despite pushback from gun supporters.

He also condemned the rise of white nationalism, pointing to indications that the El Paso shooter was radicalized online by racist ideologies, and urged law enforcement agencies and internet platforms to develop better ways to combat the spread of white supremacists.

And while Obama did not directly name President Donald Trump, he made it clear whom he was talking about when condemning language that “feeds a climate of fear or hatred or normalizes racist sentiments”: “leaders who demonize those who don’t look like us, or suggest that other people, including immigrants, threaten our way of life, or refer to other people as sub-human, or imply that America belongs to just one certain type of people,” he wrote.

Obama said that such language is not new and has been at the “root of most human tragedy,” including slavery and the Holocaust. Nevertheless, everyone should stand up against it, he said.

“It has no place in our politics and our public life,” he wrote. “And it’s time for the overwhelming majority of Americans of goodwill, of every race and faith and political party, to say as much — clearly and unequivocally.”