Obama’s message to young people of color: “I want you to know that you matter” 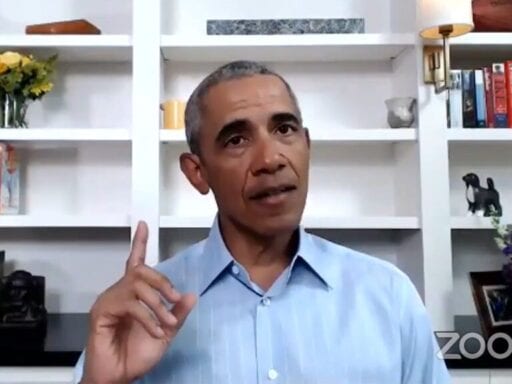 Share
Loading...
In a screengrab from the Obama Foundation, former US President Barack Obama participates in a virtual town hall on June 3, 2020. | Obama Foundation via Getty Images

Former President Barack Obama sent a message of gratitude to young people of color, who have “witnessed too much violence and too much death,” and said their activism has been a source of hope for him.

“I want you to know that you matter. I want you to know that your lives matter, that your dreams matter,” Obama said in a livestream of a roundtable hosted by My Brother’s Keeper, an organization he launched in 2014, on Wednesday evening. “You should be able to learn and make mistakes and live a life of joy without having to worry about what’s going to happen when you walk to the store or go for a jog or are driving down the street or are looking at some birds in a park.”

It’s not the first time that Obama has remarked publicly on the nationwide protests sparked by the police killing of George Floyd, signaling a level of engagement that is unusual for a former president.

He wrote an essay on Medium earlier this week contemplating how the current protests could galvanize real change. He condemned the few protesters who have resorted to violence — including breaking store windows and setting fires — urging them to instead set an example for how American society should operate and clearly articulate their demands, a message he repeated Wednesday evening.

In his roundtable, he likened the young people taking to the streets in the name of the Black Lives Matter movement to other civil rights leaders, including Martin Luther King Jr., Cesar Chavez, and Malcolm X.

“You have helped to make the entire country feel as if this is something that’s got to change,” he said. “You’ve communicated a sense of urgency. That is as powerful and as transformative as anything that I’ve seen in recent years.”

But he also acknowledged that many members of law enforcement want change, too, mentioning those who have kneeled alongside protesters in solidarity and have opened dialogues with them. Others, however, have fired tear gas at peaceful protesters and invoked excessive use of force, with one driving their police truck into a crowd.

“In some ways, as tragic as these past few weeks have been, as difficult and scary and uncertain they have been, they have been an incredible opportunity for people to be awakened to some of these underlying trends,” Obama said.

Obama called on mayors to revise their policing policies

Obama also urged the nation’s mayors to revise their policies on the use of force in policing, saying that the kinds of reforms needed to avert police brutality must happen at the local level.

Citing a report produced by a task force on policing he commissioned as president, Obama said that mayors and county executives, who appoint most police chiefs and negotiate collective bargaining agreements with police unions, hold the power to set new standards for how police interact with their local communities. District attorneys and state attorneys general, who hold elected positions, can also decide whether to investigate and charge police officers accused of misconduct, he said.

Change will therefore have to come from roughly 19,000 municipalities and 18,000 local law enforcement jurisdictions. “As activists and everyday citizens raise their voices, we need to be clear about where change is going to happen and how we can bring about that change,” Obama said. “Today I am urging every mayor in this country to review your use of force policies with members of your community and commit to report on planned reforms.”

His White House Task Force on 21st Century Policing, which he created in 2014, issued a report recommending some of the reforms that local officials should pursue. Those include increasing the collection of data relating to the public’s interactions with the police and the demographics of police departments; training police officers on deescalation tactics; commissioning external, independent investigations of deaths in police custody; and ceasing to use military-style equipment during mass protests. However, only a fraction of police departments across the country have adopted these policies in the years since the report was released.