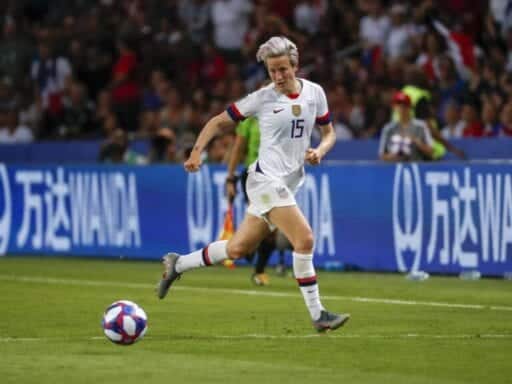 Megan Rapinoe, the captain of the US Soccer Women’s National Team, has said she would not attend a White House celebration in the team’s honor if the US wins the 2019 World Cup, as it is currently favored to do. She has, however, accepted an invitation to visit the people’s House following the tournament.

Rapinoe, who scored both her team’s goals against France in a nail-biting World Cup victory Friday, accepted Rep. Alexandria Ocasio-Cortez’s (D-NY) invitation to tour the US House of Representatives following a dramatic week that saw the soccer star in President Trump’s crosshairs.

“It may not be the White House,” Ocasio-Cortez wrote on Twitter. “But we’d be happy to welcome [Megan Rapinoe] and the entire #USWNT for a tour of the House of Representatives anytime they’d like.”

It may not be the White House, but we’d be happy to welcome @mPinoe & the entire #USWMNT for a tour of the House of Representatives anytime they’d like. https://t.co/ccgqE8vCds

Rep. Ayanna Pressley (D-MA) also extended an invitation to the team and to Rapinoe, poking fun at the Trump administration’s championship dinner for the Clemson Tigers (at which fast food was served), writing, “No doubt the food & the company would be much better.”

.@AOC no doubt the food & the company would be much better. I’ll bring the red velvet cake. @mPinoe your squad in? ⚽️ https://t.co/coryII5q8a

The captain accepted the invitation on Twitter, writing, “Consider it done.”

The team also scored an invitation to visit the Senate from California’s Sen. Kamala Harris.

Great idea! While you’re in town, we’d be thrilled to have the #USWNT visit the Senate too. California natives @mPinoe @alexmorgan13 @AbbyDahlkemper @tierna_davidson @ChristenPress have made us all proud. Kick butt next week! https://t.co/TuAVqan3Cg

Rapinoe drew the president’s ire after saying in a video published last week by Eight by Eight magazine, “I’m not going to the fucking White House.” She’d been asked if she would attend a White House celebration in the team’s honor; sports teams are traditionally invited there after winning championships. Her comments led to President Trump tweeting at the wrong Megan Rapinoe (before correcting himself) and asking her to win before making any plans.

….in our Country’s history, and the poverty index is also best number EVER), leagues and teams love coming to the White House. I am a big fan of the American Team, and Women’s Soccer, but Megan should WIN first before she TALKS! Finish the job! We haven’t yet….

….invited Megan or the team, but I am now inviting the TEAM, win or lose. Megan should never disrespect our Country, the White House, or our Flag, especially since so much has been done for her & the team. Be proud of the Flag that you wear. The USA is doing GREAT!

After Ali Krieger, Rapinoe’s teammate, jumped into the fray to say that she would also skip any White House celebrations in protest of the Trump administration’s “fight against LGBTQ+ citizens, immigrants, & our most vulnerable,” the US captain doubled down on her opposition.

In a press conference before the France match, Rapinoe reiterated she would not attend a presidential fete, and said, “I would encourage my teammates to think hard about lending that platform or having that co-opted by an administration that doesn’t feel the same way and fight for the same things we fight for.”

Rapinoe has used her platform to advocate for a number of issues, including LGBTQ rights, pay equality, and police brutality. In 2016, Rapinoe began kneeling during the national anthem in solidarity with San Francisco 49ers quarterback Colin Kaepernick’s protest against police brutality.

Shortly after Rapinoe began her on field protest, the US Soccer Federation changed its anthem regulations, requiring its athletes to stand. The captain now typically observes the anthem without singing along or placing her hand on her heart.

Rapinoe is also a key figure in the US Women’s soccer team’s gender discrimination lawsuit against the US Soccer Federation. The federation currently pays the men’s national soccer team more when it loses than it pays the women’s team when it wins, as Vox’s Tara Golshan reported:

And it’s not that the women’s team isn’t making the US Soccer Federation money; 2015 budget figures showed a $23 million increase in revenue attributed to the women’s team’s World Cup win and victory tour — more than what the men’s team brought in during that time period.

US fans reportedly chanted “Equal pay” as they marched to the stadium to watch the game against France. The team has said they plan a renewed push for equal pay following the World Cup, when the team will attempt to win concessions from the US Soccer Federation through mediation.

First, however, the team will have to take home the World Cup. They began the tournament with a dominant performance, shutting Thailand out 13-0 — scoring more goals in one game than the men’s team has in all of its World Cup appearances since 2006 combined. Now that they’ve trumped over France, the women will next face off against the English national team, which is ranked third in the world.

Tax Day is now July 15. Here’s what that means.
California’s recurring wildfire problem, explained
Why innovative tech startups are thriving across the Middle East
Why one small-business owner shut down her shop for a month
How the US stacks up to other countries in confirmed coronavirus cases
Jim Jordan’s allies are questioning the premise of the Ohio State sexual abuse allegations