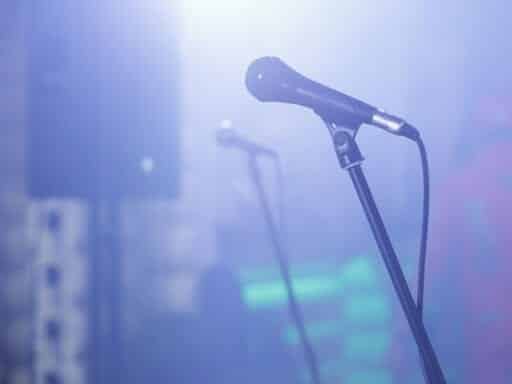 Share
Loading...
Comedians get up onstage and talk about trauma. But who do they talk to about it offstage? | iStockphoto/Getty Images

Meet the in-house psychologist for The Laugh Factory in LA.

Onstage, the comedians at The Laugh Factory weave anecdotes about breakups, problem relatives, and bad first dates for laughs. But Ildiko Tabori always gets the real story. When comics are sitting in Tabori’s office, traumas are presented without a punchline. That’s her job: to help funny people deal with the problems that stick around long after the crowd finishes laughing at them, like a real-life Dr. Katz.

Tabori has been The Laugh Factory’s therapist-in-residence for nine years, and in that time she’s worked with dozens of different comedians who’ve made their way through the Sunset Strip institution. Her clients can either meet her at her own Los Angeles practice, where she works with her other civilian patients, or if pressed for time, at an upstairs enclave in The Laugh Factory before they go on in the evening. The first six sessions Tabori has with a comedian are pro bono. Any additional sessions are arranged with a copay. After nearly 10 years in the business, she says she feels like a full-fledged member of the comedy family — fluent in its jargon, culture, and neuroses — despite never performing herself.

There is a mythologized idea, promoted in everything from the Joan Rivers documentary to WTF with Marc Maron, that all comedians suffer from extreme psychological issues and that the act of performing serves some sort of dual artistic and palliative purpose. Tabori feels like that’s only partly true. She was hired by The Laugh Factory because of the addiction and self-harm issues that have historically decimated the standup community, but she believes that everybody, funny or not, has their own mental health strain. Comedians aren’t special, they just tend to be more open about their ailments. We talked about that, the unique anxieties and stresses of a career in comedy, and how both she and her clients grieved over an untimely death in the family.

How did you end up getting your job at The Laugh Factory?

It came about in 2011. I’ve been doing it nine years now. What happened was that Jamie Masada, the owner of The Laugh Factory, created a real comedy family with him as the godfather. The comedians have often gone to him for advice, and he has been there to support them.

At least once a year the comedy world loses someone to an overdose or a suicide or something to that effect. He recognized that comedians needed a little more support than he could provide. I came into the mix because somebody recommended me to him. I met with him, and it went from there.

What’s your day-to-day like? How is this gig different from more traditional therapy jobs?

Comedians schedule appointments with me and I see them. The only difference is that I can see them at the club. Obviously not onstage, but at the offices there. I can also see them in my offices or online. Comedians travel a lot, and the medical field is evolving that way [to allow online sessions].

Are you ever with someone the same night they’ll be performing?

Yes, but we don’t really talk about their performances per se. Unless there’s an issue with it. But the ability to perform is less of a focus, and it’s more emphasized on the issues in their life.

What would you say are the differences you notice by working with comedians, compared to more general therapy services?

Comedians are a unique bunch of people. I’ve often described it as the hardest job in entertainment. It’s the only job where you get immediate feedback, when you’re onstage doing standup. It’s not the same thing as it was in the ’70s and ’80s — comedians are doing a whole lot of stuff, they’re writing, they’re acting. I truly believe — and I have nothing to base this on other than my own experience working with them — but they probably have higher IQs than the general population. That would be a great dissertation topic for a grad student. They have to think on their feet, they have to be really quick. It’s about observing everything and turning that into something we can laugh at. We all have the same experiences in life — we all have our families, we all walk the dog — but they can flip it.

“It’s the only job where you get immediate feedback, when you’re onstage doing standup”

They’re on the road a lot. They are spending all this time by themselves, in these not-so-nice hotel rooms away from their families. I’ve had an experience recently with one of my comedian patients who works on cruise ships, and he’s away from his kids and his wife. It’s really hard. You miss things. Your social support is limited. You have all this downtime, you work for an hour at night, and then there’s more downtime. You spend a lot of time spinning the wheels in your head.

After nine years of working at The Laugh Factory, do you think you have a better context for the comedy industry? Are you able to relate with them more?

Oh yeah. Ever since I was little I was a comedy fan, but I didn’t understand anything about the life of a comedian. They have trained me and trained me well. I started my career in the LA County Jail. I’ve never been incarcerated, so I didn’t know anything about inmates. They taught me what their life is like. It’s the same thing with comedians, though I’m not comparing inmates to comedians.

Is that training process about learning their culture and the jargon, or does it go deeper than that?

It is about that, but it’s also about learning their internal thinking and what’s consistent between the comedians. Like, I now know that you’re lonely in a hotel room by yourself at night. I now know you’re upset when you’ve had a couple bad nights in a row. I now know that newer comedians are going to be more upset about jokes that are bombing than more seasoned comedians. That’s the stuff they’ve taught me.

What are some of the core trends you notice across all your comedian clients?

We talk about the things you and I would talk about. Relationships, finance, family problems, substance abuse, those sorts of things. You find that with anybody. With comedians, though, we talk about success; if they’re getting more successful, or if they’re not successful, or if they’re stuck in the status quo. One of my patients has been with me for nine years, and I’ve watched his success increase to the point where he can’t go into a grocery store. He lost his anonymity. You say, “I want to be famous,” and now you’re famous, and it’s not as fun as it looked.

When somebody’s career isn’t going in the way they want it to, and they’re watching their comedy friends rise, there’s this sense where they want to support their friends but they’re also kind of jealous. It’s cognitive dissonance, having those two feelings. That’s a big trend as well.

Should people be honest about being jealous of their friends?

When you talk to your client who’s now considerably more famous than when you met him, does he feel like the same person? Do the same themes come up in your sessions with him?

Does it help you at all, as a therapist, when you’re familiar with someone’s comedy work?

Sometimes, though, when a comedian is telling a story onstage, I’ll be like, “That sounds familiar, but I know the real story.” The story I hear isn’t that funny, but onstage it’s pretty funny. I’m like, “Okay, they’ve managed to turn this into something positive and good.”

Has anyone ever talked about their therapist onstage, and you knew that the therapist in question was you?

Oh yeah, they’ve pointed me out before. At first I was like, “I don’t want anyone to know me,” but they all talk among themselves. I had one comedian tell me, “You’re the only person who thinks that you’re being all secretive and private with all your patients here.”

There’s a perception out there that most comedians suffer from mental health issues. How true do you think that is?

“When a comedian is telling a story onstage, I’ll be like, ‘That sounds familiar, but I know the real story’”

I don’t necessarily think that they’re more plagued. But they are much more open, and they can use [standup] as a platform to talk about their stuff. We’re all a little bit crazy. They’re just owning it, where a lot of the population doesn’t want to own it. Everyone that exists in the world today has experienced depression, anxiety, sadness, or anger. But for them, it’s projected on a grander scale because they have that outlet.

You mentioned addiction and suicide earlier in this conversation. You’ve been a part of the comedy family for a long time, have you been personally affected by any of those tragedies in the comedy community?

On a personal level, yes. A former patient of mine, a comedian, committed suicide about a year ago. Never in my career have I had somebody that I was aware of killing themselves. This one I knew, and I hadn’t seen him in therapy. I’d seen him around, but I hadn’t seen him in therapy for years. It was a hard thing to process. It was devastating to the community, because he was a very local, LA, well-liked guy.

It must’ve been weird to be grieving, but also to be put in a position to professionally address other people’s grief around the same person.

Right. I’ve lost friends and family members. I’ve had patients who’ve talked about losing a parent or friend or something. I’ve drawn on my own experiences, as therapists often do. But this one was a new one for me, because I was grieving the same grief. I had to put my professional hat on and grieve in my own personal time.

When you consider your role as a therapist who’s carved out a niche for standup comedians, do you think that the mental health field should get more specialized? Should there be more niches that focus on smaller professional communities?

Oh absolutely. We have that trend in mental health. My primary speciality is in neuropsychology. That was a lot of my training in school. But you gain specialties and subspecialties in your practice. But you don’t think, “Oh wait, comedians!” I’ve gotten asked over the years if I specialized in comedians in school, and obviously that’s not the case. We definitely need more resources dedicated toward mental health in all different programs and all different communities.