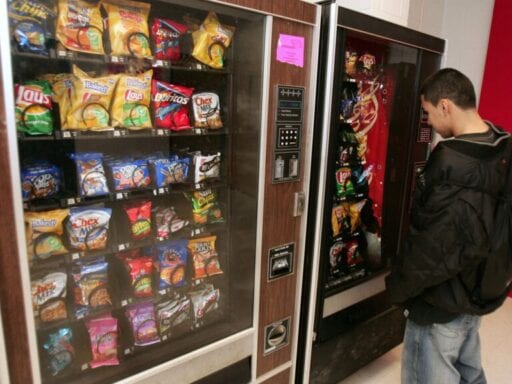 Nineteen-year-old Jamie Ibanez owns five vending machines, but he makes most of his money from his YouTube channel.

Here’s a little-known fact: Vending machines are independent entities. They aren’t leased by PepsiCo, the Coca-Cola Company doesn’t send drivers out every evening to restock soda cans, and Wrigley never receives the four quarters you plunked into the bowels of your laundromat’s confectionery display for a months-old bag of Skittles. Instead, the vending industry is the provenance of people like Jaime Ibanez, a 19-year old who owns 25 machines in eight locations around the Dallas-Fort Worth area, all under the banner of his own company: Vending Bites.

Ibanez tells me that working in vending machines is comically hermetic. He wakes up early and checks an app on his phone called MoMa, which gives him a snapshot of the specific items that have been purchased from the card readers on his machines. Then it’s off to Sam’s Club, where he buys chips, pretzels, and candy bars in giant shrink-wrapped multipacks. Ibanez hauls the goods around in the back of his car along the eternal highways of North Texas until his vending machines are restocked and the money reclaimed. All of this labor is undertaken by Ibanez and his girlfriend, Lizbeth Galvan. (He doesn’t pay her a salary, but the vending machines pay for their shared rent and bills.) The couple makes each trip together, and usually, they’re back at home around 4 in the afternoon.

Ibanez is a licensed vending machine owner, but many of his day-to-day responsibilities look like those of a job in the gig economy: the sunk costs of the supplies and mileage, the unpredictable bottom lines, the selling of corporate products with limited oversight and liability from the corporations themselves. It feels very much in line with how many young people make their money in 2020.

Ibanez actually gets most of his income from his YouTube channel, where he keeps his 273,000 subscribers updated on the daily hustle of a vending baron. In total, Ibanez tells me his channel earns him an extra $10,000 a month, which is triple the amount he makes from the quarters and dollar bills he rustles from his machines. Ironically, Ibanez has found that talking about his business in front of a camera is exponentially more profitable than operating the business itself. We talked about that, as well as why he wanted to pivot from getting his real estate license to purchasing vending machines and the biggest mistake young investors make in such a deregulated industry.

The following transcript of our conversation has been lightly edited for length and clarity.

How did you get into this business?

I graduated high school in 2018 and planned on going to real estate school. But a week after I graduated, I saw a YouTube video of someone who does the same thing that I do now. It seemed fun to me: The guy was just going around taking all this money out of these machines, and he said he basically worked once a day. Two days later, I went out and bought my first vending machine.

I think a lot of people think vending machines are owned by some corporation, rather than by individual people. What is this grind like? Is it super DIY? Do you have to make deals with a company like Coca-Cola, or do you just buy stuff and put it in the machine?

Yeah, it’s a lot more simple than people think. You can buy a vending machine used from Craigslist, and you get your business license. You go to door-to-door talking to business owners and offering the service. You say, “Hey, we’re a vending machine company. Do you want to work with us?” You can make a contract with them. I actually don’t have any contracts with anyone I work with, but you can do that.

Do those clients get a portion of the profits?

Normally yes, but I’ve got 25 machines, and I only give commission to one owner. A lot of owners don’t even know how it works. Some of them ask me, “How much do you charge?” Which is crazy, that vending machine owners would actually charge to set up their machines. But yeah, I just talk to them, we set a date for me to install the machine, and I fill it up every two weeks.

You mentioned getting a business license. Do you have to be an LLC or something to do this the right way?

Yeah, you need a license and a tax ID, to do it legally. Especially because it’s food and drinks. We are a food and drink company.

What’s your daily routine as a vending machine owner?

On a normal day, when we go to restock the machines, I like to wake up really early because a lot of machines are at offices and warehouses. Sam’s Club doesn’t open ’til 7, so I’ll get up at 6, I go online — I can see what’s been selling at my machines from the credit card scanners, so it tells me exactly what drinks and chips are gone. I write down what I have to buy, and I separate the products in boxes. Then I head off to the location. I usually only do about two or three locations a day, because I make videos on YouTube, so I want to have enough stuff to shoot.

When do you get back home after all of that?

I’d say around 4 pm. Just because my locations are an hour away, and I can’t go to all of them in one day because of my YouTube videos. But other people with a vending machine business can go to, like, 10 locations in one day, and not go back for two weeks.

What are the best places to set up a vending machine, as far as profit goes?

The most common ones would be warehouses, because workers can’t really leave [that area]. Barber shops also. I’ve got a barber shop right now and it does really well. But not retail. I’ve tried retail before, and workers there don’t buy anything.

How much money can you reasonably pull in a month from vending machines?

I’d call a good month for 25 machines and eight locations to be about $6,000 to $7,000. The thing with vending machines, though, is that the net profit is only like 50 percent. So about $3,000 a month. The margins are what they are, between the food purchasing and gas.

What are the most efficient ways to buy product for your vending machines?

So, when I first started I went to Sam’s and bought a bunch of random stuff. It was trial and error, to see what worked. But the basic stuff always works the best. M&Ms, Skittles, regular chips. I’ve tried different kinds of candies, and the basics always do better. I stick with that. Sometimes I’ll still put a single weird item in the machines [in the past that’s included Instant Ramen packs, frozen pizzas, microwave popcorn, and even milk], but everything else is the same.

What’s it like when you’re pulling out a bunch of quarters and nickels from a machine and trying to transfer that to your bank account? Is that difficult?

It’s pretty annoying. I don’t take the coins to the bank because I have to roll them. I’m not going to sit there and do that all day. But I’ve got a 5-gallon bucket in my office that I dump them into. It’s about halfway full right now. I’ll probably have to find a bank that takes loose change. I’ll figure that out when it’s full.

You mentioned your YouTube channel, which is quite popular now. Why do you think there’s such a fascination for watching people work the vending machine hustle?

I really think it’s the money. The reason my channel grew is because my thumbnails were me holding a big wad of cash, and I was 18 years old with my own business. But a lot of other people say the videos are satisfying, watching a vending machine get restocked. Before the videos, nobody really knew how all of that worked.

What are some of the first mistakes people make in the vending machine business?

The biggest mistake people make is not doing the research on the machines. They don’t check which ones are good and which ones are bad. That’s very important. In vending, you want to spend a little bit more money to get a good machine because it’s going to benefit you in the long run. I’ve talked to a lot of people in the vending business, and they’d tell you not to buy machines made overseas. If the machine breaks and you have to get parts, you have to get them from over the Pacific, and that will take weeks.

What happens when you have a machine that’s malfunctioning? Is that a stressor for you?

For new people, yes, because they hear it and they don’t know what’s going on. But for me, if I get a call and someone tells me that my machine isn’t taking money, I know it’s going to be an easy fix. Like the coin mechanism — where the coins go — is jammed, and it’ll be easily replaceable.

What’s the hardest part about this job?

Probably that you can be called at any time to go fix a machine. I’m home, it’s my day off, and I get a call: “Hey, something is wrong with the machine.” I like to be prompt in the way I run my business. I want to go fix it on the same day they call me.

You’ve been in this business for almost a year and a half now. What keeps you around? Why stops you from burning out?

My first job when I was 14 was in concessions, where I restocked food and drinks. It’s a part of me. I talk to other people in the vending business [who are] my age, and it’s just a job to them, but for me, I just like it — refilling the machine, collecting the money, and going home. I see myself in this industry long term. I’m going to stick with it. Eventually, if I have too many locations, I’ll expand it and bring on some employees. I want to grow it a lot more.

To beat Trump, try running an outsider
Why Congress and the Pentagon are tussling over US troops in West Africa
Justin Fairfax, second in line for governor of Virginia, faces sexual assault allegation
This week in TikTok: These kids got “quarantine famous”
These huge new wind turbines are a marvel. They’re also the future.
Trump has consistently mocked adherence to public health guidelines