Of course Glass Onion is a blast. But it cuts deeper than Knives Out, too. 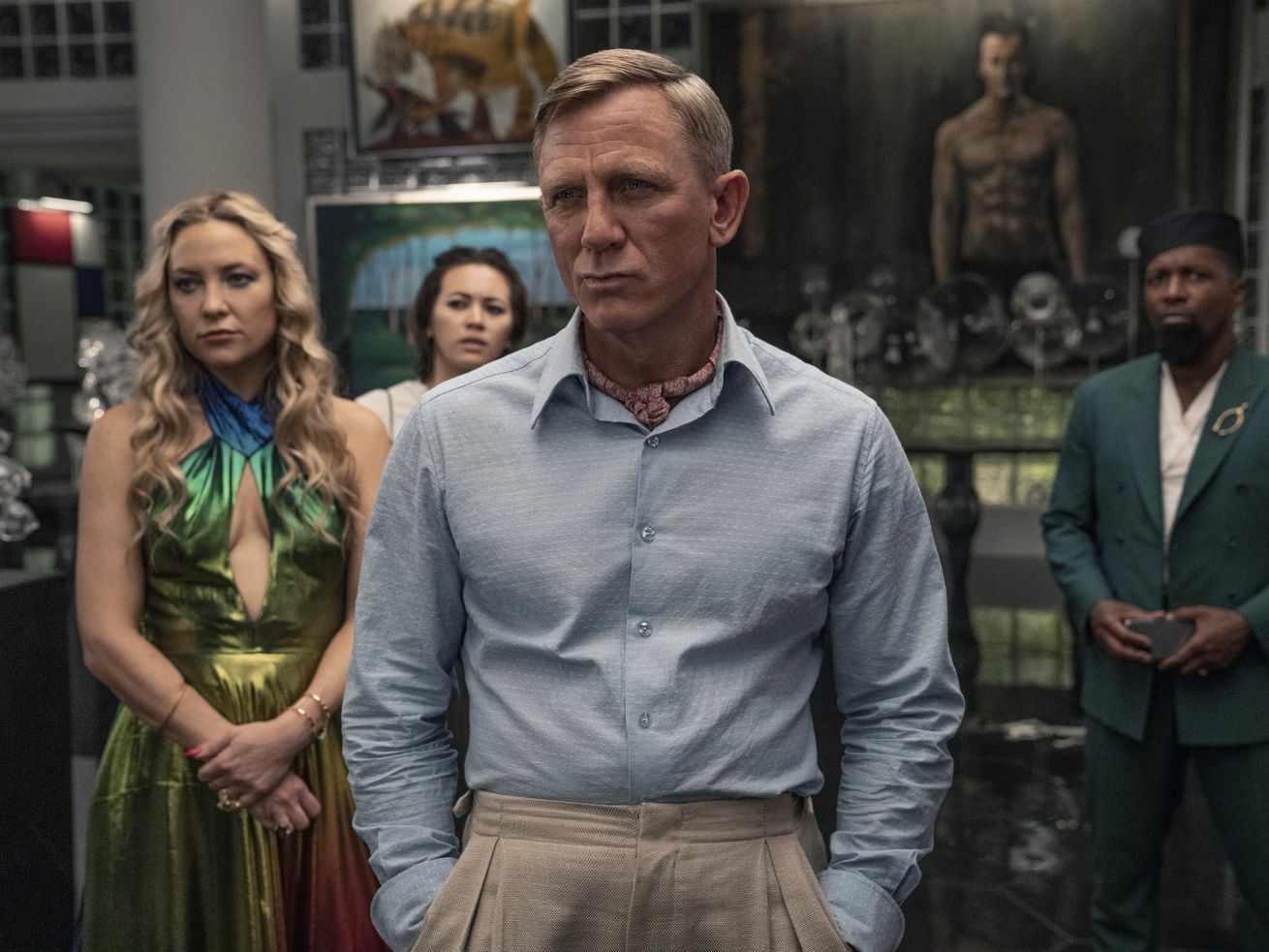 There’s a song on the Beatles’ self-titled album — more commonly called the White Album — entitled “Glass Onion,” and it’s a bit of a head-scratcher. “I told you about strawberry fields / You know the place where nothing is real / Well here’s another place you can go / Where everything flows,” the song begins. It’s self-referential, with nods to songs like “I Am the Walrus,” “Fixing a Hole,” and “The Fool on the Hill,” and the lads croon about “looking through a glass onion,” where you can “see how the other half live.”

What does it mean, you might ask? Well, nothing, and that’s why John Lennon wrote it, explaining in 1970 that “I was having a laugh because there’d been so much gobbledegook about [the Beatles’ Sgt. Pepper album], play it backwards and you stand on your head and all that.” People had been reading way too much into Beatles lyrics; Lennon wanted to screw with them a bit by serving up cryptic lyrics that didn’t mean anything at all. (Charles Manson didn’t get the joke and became convinced — or at least convinced his followers — that the White Album was actually the Beatles’ attempt to contact him and his “Family,” and warn them about a coming race war; eventually, this became the impetus for the infamous murders of Sharon Tate, Jay Sebring, and three others on Cielo Drive. But that’s another story for another day.)

Anyhow, don’t read too much into the lyrics of the song — but maybe read a little because they seem to have furnished a bit of a jumping-off point for Rian Johnson as he wrote and directed Glass Onion: A Knives Out Mystery. It’s the sequel to his 2019 smash hit Knives Out, and similarly, this film concerns a big mystery with a big cast of characters. The only holdover from the first film is Detective Benoit Blanc, played by a ludicrously accented Daniel Craig, who looks like he is, once again, having a blast. (And who wouldn’t? They shot in Greece during the pandemic.) This time, he’s ended up at the island home of a tech billionaire named Miles Bron (Ed Norton) with a bunch of Bron’s college friends for a weekend away and some kind of unspecified surprise.

(Miles Bron is not exactly an anagram for a certain owner of Twitter, but it’s not all that far off! But I’m sure I’m reading into things.)

The fun of the Knives Out series is, in large part, that you’re just being invited to join a party. Yes, there are murders, but it’s still a good time, and everyone seems to be having fun making the movie. The guests aren’t just Norton and Craig, but Kate Hudson, Dave Bautista, Kathryn Hahn, Janelle Monáe, Leslie Odom Jr., and Jessica Henwick, plus a whole lot of surprise celebrities who show up for brief and delightful cameos. They’re all trying to solve the mystery, and so are you. And in the end, it’s immensely satisfying.

In that way, it’s clear that Johnson is working in the long tradition of the great Agatha Christie, who frequently populates her mystery novels, led by detectives like Miss Marple and Inspector Poirot, with casts of characters that represent people from across the many social and cultural strata of the 19th century. There are spinsters, doctors, educated gentlewomen, badly behaved cads, servants, inspectors, ministers, you name it — all types who sometimes subvert but more often fulfill the stereotype. And since you know what each person’s characteristics are likely to be, it’s much easier to sink into the mystery and enjoy it as it hums along.

Like Christie, Johnson puts a detective at the center — Blanc, in this case — who seems a bit eccentric and easy to underestimate but is actually very cunning and observant. Your job is to spar with him, to try to solve the mystery before he does. All of that makes Glass Onion a blast and prompts the audience not just to sit passively but actively take part in the movie.

But at the same time, both Knives Out and Glass Onion harbor a bit of an edge as, I suppose, befits the title of the series. The first film was not just a fun mystery-comedy; it was satirical, a skewering of old money and a kind of pseudo-progressive type who really just wants to preserve their own social standing. (Remember the Hamilton references?) The series got its start as a barbed look into “how the other half lives,” as Lennon wrote.

For the second film, Johnson coasts on over to the world of self-styled “founders,” which I think used to be called the “creative class” — people who worship innovation, live by smoke and mirrors, go around talking about moving fast and breaking things, and get rich by means that are perhaps less than ethical. The film takes great pleasure in skewering them all, slowly unpacking and exposing their hypocrisy, stupidity, and banality.

Of course, there’s a layer of irony in jabbing at tech founders and innovators when your movie is bankrolled and distributed by one of the biggest tech stories of them all: Netflix, which has altered the shape of cinema and entertainment irrevocably in the past 15 years or so. In fact, even this film is part of Netflix’s effort to figure out how it will stay alive; it’s getting a one-week run in limited theaters, followed by several weeks’ pause before it lands on the streamer. An odd strategy for a sequel to a movie that sold far more tickets than anyone thought it would and made a huge return on its modest budget. Whatever Netflix’s strategy here — perhaps an effort to sell out theaters in the one-week run, garner tremendous buzz, and end up with lots of subscriptions from people who wanted to see it in theaters and couldn’t get a ticket? — it’s the kind of experimenting that today’s Silicon Valley types seem to exult in. It’s exactly the kind of thing Miles Bron and his buddies might try to do.

But then, maybe that’s the point? There’s a good chance that Glass Onion is, in a sense, satirical about itself — a murder mystery with an edge that’s directed reflexively. All in good fun, of course.

Or maybe it’s not. Maybe it’s just having a laugh. There’s been so much gobbledegook, after all. The joy of Glass Onion is that you can read into it, or just let it flow over you and enjoy the ride.

Glass Onion: A Knives Out Mystery opens in theaters on November 23 for one week and then will premiere on Netflix on December 23.