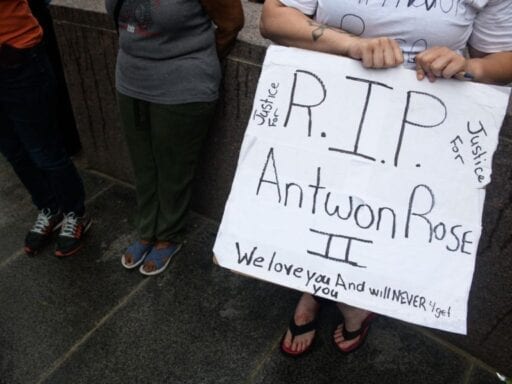 Michael Rosfeld was new to the East Pittsburgh Police Department. A lawsuit suggests he shouldn’t have been hired.

East Pittsburgh police officer Michael Rosfeld’s past conduct has received intense scrutiny after he was charged with the shooting of 17-year-old Antwon Rose in June. Now, two men are accusing Rosfeld of “willful police misconduct” while on duty in a previous job, questioning how the officer “was able to still be a cop.”

Timothy Riley and Jacob Schilling filed a lawsuit against Rosfeld on Monday, alleging that the officer violated their civil rights and detained them without cause last December after an incident at a bar. The lawsuit, which stems from Rosfeld’s time as a police officer with the University of Pittsburgh, also argues that he had a “financial, personal, and or business relationship” with the bar’s owner and that he fabricated a police complaint recounting the incident.

The suit, filed in the Allegheny County Common Pleas Court, alleges that the discrepancies in Rosfeld’s account of the incident and footage captured by a surveillance camera led to the officer being suspended and later fired by the university police department earlier this year.

Riley and Schilling’s suit was filed days after Rosfeld was charged with criminal homicide in the shooting death of Rose, who was unarmed and fleeing from a car when he was shot from behind. Rosfeld had been on the job for a few weeks and was officially sworn in as a police officer just hours before Rose’s death. In initial reports, Rosfeld said that the teen had turned toward him while holding “something dark that he perceived as a gun.” He later said he did not see Rose holding a gun. The shooting has led to days of protest in the area.

The lawsuit against Rosfeld, and the questions it raises about his record as an officer, points to an issue in other police shootings. In several instances, officers have been accused of misconduct or excessive force prior to a fatal shooting, leading critics to argue that they should have been removed from their positions well before a shooting occurred.

The civil suit against Rosfeld alleges several acts of misconduct

The new lawsuit against Rosfeld dates back to a December 9, 2017, incident at a campus bar called the Garage Door Saloon. At that point Rosfeld had been an officer with the University of Pittsburgh Police Department for more than five years.

That night, Riley and Schilling, along with two others, were at the bar celebrating a birthday when the owner “forcefully removed” the four men, according to the lawsuit. The men then approached a nearby officer for assistance. Rosfeld also responded to the incident.

When Rosfeld arrived, the lawsuit alleges, he immediately used force against three of the men and arrested them. In his reports of the incident, Rosfeld largely recounted the incident from the bar owner’s perspective, saying that the men had picked a fight with another person at the bar, prompting their removal. The report also said that one of the men broke a glass door and assaulted an employee. The men denied these claims, arguing that surveillance footage showed otherwise. But Rosfeld — claiming that he watched the footage — said that the video backed the owner’s account. The three arrested men then spent the night in jail.

According to the lawsuit, the Allegheny County DA’s Office dismissed the charges against the men after concluding that surveillance footage “did not support” and “contradicted” Rosfeld’s reports.

Lee Merritt, an attorney representing Rose’s family, argues Rosfeld should not have been hired by the East Pittsburgh Police Department in May of this year because of the December incident.

Merritt said he became aware of the allegations in the new lawsuit while looking into the officer’s background, Mother Jones reports. In June, Merritt told the New York Times that he believed Rosfeld’s employment history would “reveal significant history of abuse of authority.”

“It makes me sick that he was able to still be a cop after how they treated us,” Riley, one of the plaintiffs in the civil suit, told the Pittsburgh Post-Gazette.

This isn’t the first time that an officer’s prior behavior has raised questions about their continued employment in law enforcement. Police department policies and the ability for officers to move to other departments can exacerbate the issue. A 2017 investigation from the Washington Post noted that many officers fired for misconduct are later reinstated by their agencies, often because police leadership didn’t following protocol when terminating them. And officers who leave their departments after major scandals are often rehired by different departments.

In Rosfeld’s case, others may soon come forward with allegations. According to Robert N. Peirce, the attorney representing Riley and Schilling, “more than five” people have come forward with misconduct claims against the officer. Those complaints could factor into the current criminal case against Rosfeld. The officer’s first hearing over Rose’s shooting was recently rescheduled for July 27.

Former FBI Deputy Director Andrew McCabe is at the center of a political firestorm again
Uber had a terrible first day as a public company. It might not matter at all.
Doug Emhoff, wife guy extraordinaire
“Our culture is not up for sale”: The stakes of Trump’s push to drill in the Arctic refuge
The killing of Daniel Prude, explained
The waves of feminism, and why people keep fighting over them, explained