Officers shot and killed a black teen. They won’t be charged because of a “fleeing felons” law. 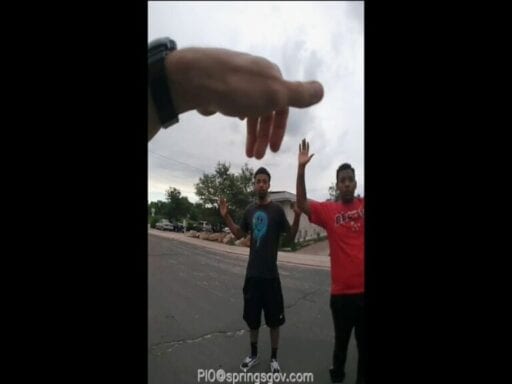 A grand jury found the shooting death of De’Von Bailey was justified.

The Colorado Springs police officers who shot and killed a black 19-year-old will not face charges, a grand jury ruled Wednesday. The use of lethal force in the death of De’Von Bailey, which had sparked protests over what appeared to be another case of police brutality from white officers against a black teenager, was found to be justified.

On August 3, two officers shot and killed Bailey after they stopped him and another man on the street and questioned them about an alleged armed robbery. Body-cam footage recorded Bailey running away from officers during the stop, who then shot Bailey in the back three times. He later died in the hospital. Officers found a gun in his pants immediately after shooting him, though attorneys for Bailey’s family argued the footage showed he wasn’t a threat to the officers.

According to District Attorney Dan May, the grand jury found that Bailey’s fleeing justified the officers’ shooting, citing state laws that protect police who shoot fleeing suspects. However, these statues are controversial, because they conflict with a U.S. Supreme Court decision that determined such shootings to be unconstitutional.

In October, May announced that a grand jury would be investigating whether to charge the officers who shot Bailey. Prior to the grand jury, Bailey’s death was investigated by the El Paso County Sheriff’s Office, then the District Attorney’s Office for review. However, Bailey’s family has long called for an independent investigation of the teen’s death, arguing that the law enforcement entities were too close. Colorado Gov. Jared Polis and other elected officials echoed those calls.

“Our nation is grappling with difficult challenges concerning race and how we treat one another,” Polis said at a news conference at the time. “It is more important now at this moment in time that our law enforcement agencies go above and beyond to maintain public trust and confidence.”

The grand jury’s decision was a “no true bill,” which dismisses the defendants when a grand jury finds not enough evidence to charge them, according to a statement from Colorado Springs Police Chief Vince Niski via CNN.

“This is the exact result that the process was designed to yield,” Mari Newman, an attorney representing the Bailey family, told Vox on Thursday. “When a tainted investigation is presented by a biased prosecutor, a grand jury can only come out one way. This is the very reason why we have called for an independent investigation and an independent prosecution from the beginning.”

Body cam footage of the police shooting outraged the community

Calls for justice rang louder after the release of graphic body-cam footage of Bailey’s death.

In August, 12 days after the shooting, the Colorado Springs Police Department released video of the 911 call and footage. According to the transcript and recording of the call, a man told the dispatcher that he was walking down a street when he was approached by two men who demanded whatever was in his pockets and then hit him. He said one of the men pulled out a gun and then took his wallet. He then walked to a nearby office to call the police and report an armed robbery. He mentioned he had a history with them and knew who they were.

In the body-cam footage from the same day, an officer gets out of his car and stops two men, asking them about a possible assault. Bailey appears to take a water bottle out of his pocket, then is told by the officer to keep his hands out of his pockets. The officer then asks them their names and tells them to put their hands up. He said that they had a report about two people with similar descriptions having a gun on them, and that the officers were going to search them for a weapon.

As a second officer walks up behind Bailey, Bailey begins running away from the officers. They run after him and tell him to put his hands up before shooting him in the back multiple times. Bailey falls to the ground. After the officers cuff Bailey and call for medical assistance, the officers find a gun in his shorts and cut the shorts off him.

Following Bailey’s death, protesters in Colorado Springs came out to decry gun violence and police brutality, saying Bailey was murdered and criticizing the police department for putting the officers who shot Bailey back on active duty. At one protest two days after Bailey’s death, two white men were arrested after they approached protesters and drew their guns. In September, protesters interrupted Colorado Springs Mayor John Suthers’s State of the City speech with chants of “justice for De’Von,” and were pushed out of the banquet hall, then later removed from outside of the room by the police.

Despite arguments from Bailey’s family’s attorneys that the teenager didn’t pose a threat to officers when he fled, Colorado law often protects police who shoot suspects who are running away, according to the Denver Post. The statue itself is often referred as “fleeing felons,” though Bailey was but a suspect.

”If the officer has a reasonable belief that the person has used a deadly weapon in a crime and is still armed, they can use deadly force to prevent that person from being a fleeing felon with that deadly weapon,” May, the district attorney, told BuzzFeed News.

Colorado law supports this, upholding that cops can use deadly force if they “reasonably believe that it is necessary” to defend themselves or someone else from imminent harm, but it also goes a step further to protect cops in shooting suspects who flee. Specifically, Colorado cops can use lethal force to “effect an arrest or to prevent the escape from custody, of a person whom he reasonably believes…has committed or attempted to commit a felony involving the use or threatened use of a deadly weapon.”

While supporters of the law argue that the statute prevents “fleeing felons” from getting away and perhaps further endangering their community, the Post points out that a 1985 U.S. Supreme Court case already determined the general shooting of fleeing suspects to be unconstitutional. In Tennessee v. Garner, the court ruled that law enforcement is in violation of a person’s constitutional rights when they shoot a fleeing suspect who isn’t an imminent threat.

“How do we know that the officer willfully violated someone’s rights?” Leong told the Post in an email at the time. “It’s quite rare for officers to be convicted under this statute.”

Trump says he misspoke about Russia’s election meddling. Twitter isn’t buying it.
Civil rights icon Rep. John Lewis has stage 4 pancreatic cancer
How “Karen” became a watchword for racism
Eighth Grade’s R rating deters actual 8th graders from seeing it. What a shame.
Brazil’s Amazon rainforest destruction is at its highest rate in more than a decade
3 reasons the American Revolution was a mistake