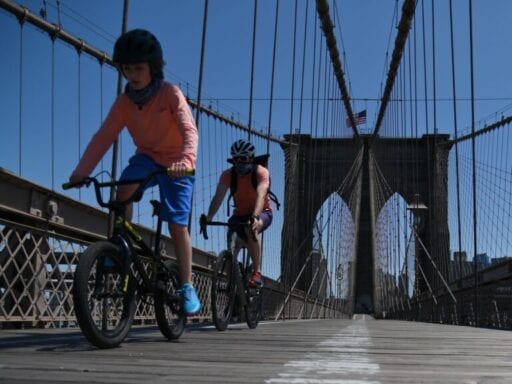 Demand for bikes is surging, but the supply chain is still catching up.

Last week, I realized my decade-old Mongoose bike was falling apart. Its brakes honked like an aggrieved bird, and the back frame had bent enough that a repair shop called it a significant safety issue. So, anticipating several months of traveling by bike, I started to call my local shops to see what was available.

It didn’t take long for me to realize I was not alone in seeking out a new mode of transportation for the pandemic. When I finally found a store that had a bike in my price range and size, there was just one left, and it was still being assembled. The bike shop owners told me they’d never seen sales like this and were struggling to get more supply.

This struck me as peculiar, since I’ve now also come across viral videos of bikes being put out of service and dropped in a dumpster:

Heard the decision may lie with @limebike instead of @JUMPbyUber. Maybe someone has a contact that can see value in a better outcome? Keep the message going! #CreateChange #SenselessWaste #BikesForKids pic.twitter.com/TeMIpQ1hi3

It turns out the bike situation is complicated. Bike shops are running out of bikes, and at least one bike-share company is shredding some of its inventory. Jump by Uber, the company whose bikes are featured above, sent thousands of its e-bikes and scooters to be recycled in early May — Uber has said they were old and had safety issues — while others have been transferred to the e-scooter company Lime, in which Uber recently made a sizable $170 million investment.

Still, bikes have quickly become one of the best ways for many people to get around. Across the country, many bike shops have been classified as essential businesses, and some delivery workers who have continued to work during pandemic have used bikes and e-bikes to travel from place to place. Meanwhile, others have turned to bike-share programs like CitiBike and Lyft, which are offering free memberships to front-line workers.

Warmer weather and the reopening of various businesses throughout the United States has more people looking to buy bicycles, so much so that bike shops are now worried about running out of stock. The NPD Group, a market research firm, estimates that the cycling business has seen sales rise by more than 30 percent since the first quarter of this year. Sales for adult lifestyle bikes more than doubled in March, while sales for transit and mountain bikes also grew that month. Meanwhile, some cities are making room for an anticipated surge in cyclists, adding extra bike lines while closing off entire streets to cars.

It’s unclear how long the bike shortage will last or whether peoples’ transportation habits are really changing forever. In the meantime, we’ve broken down what got us to this point.

As the US began to shut down earlier this year, Trek Bikes began preparing its shops and customers for a dip in business. Even when bike stores were declared essential businesses, they prepared to adjust their shops for social distancing, expecting only a limited amount of traffic. Then, in the first week of April, web visits to the Trek website started spiking, and the company’s brand director, Eric Bjorling, noticed that the number of people searching for local bikes shops was growing.

“We thought that might be an anomaly” Bjorling told Recode. “But then it just kept happening.”

Now, he says, sales are booming.

“Lo and behold, we’re in the midst of one of the biggest bike booms in the United States’ history,” Bjorling said.

But just because people are looking for bikes doesn’t mean they’re available. Jenn Dice, the chief operating officer of PeopleforBikes, a bike advocacy organization, says that bike shops will typically order more bikes based on their sales from the year before and their pre-existing inventory. No one had anticipated a pandemic.

Meanwhile, many of the factories in Asia — which Bjorling calls the “center of the supply chain” — shut down due to the pandemic. These factories produce not only fully assembled bikes but also bike components, like tires, wheels, and handlebars. So when they closed down, the supply of all kinds of bike-related goods coming into the US plummeted. On top of all that, China’s tariff battle with the Trump administration had already disrupted bike manufacturing as some companies looked to move production out of the country.

“Probably about 90 to 95 percent of our US bikes come from China, and with Chinese New Year and with coronavirus, everything was shut down for weeks,” says Dice. “That, of course, delayed production, and it took a long time to get back up and running.”

Bjorling also bemoaned the factory shutdowns in China but remains optimistic about future production. “The nice little silver lining to that is those factories have been up and running,” he said, “and those bikes are on the way.”

Others were more cautious. Mehdi Farsi, the co-founder of the Arizona-based Bicycle Co., says his company already sold out all of its preorders for June. The bikes people were purchasing in May, he says, would have been produced back in February or January.

“The lead time for most bike manufacturers — at least in our case — is 90 to 120 days when things are up and running,” Farsi said.

Imbert Jimenez, the head of Master Bike Shop in Manhattan, is also dealing with shortages, especially for more affordable models.

“The only bike you can get is over $2,000,” Jimenez said. He added that getting new stock will be “almost impossible” and likely won’t happen until September or October.

How people are using bike shares is changing

Bike-share companies don’t appear to be seeing quite the same enthusiastic rush of new customers as bike shops. Many are still recovering from the negative impact of stay-at-home and social distancing measures, and are still looking out for how the pandemic could shift how people travel around cities. It’s possible that people prefer to buy their own bikes because they’re fearful of touching a bike that’s used by strangers, though companies had also promised to improve sanitation amid the pandemic.

For now, the numbers don’t look good. A Lyft spokesperson told Recode that, while there were more than 1.7 million rides on Citi Bikes in April 2019, there were fewer than 700,000 in April this year. The year-over-year comparison in ridership is similar for May, though demand seems to be rebounding somewhat.

There are signs of distress elsewhere in the micromobility industry. A company called Zagster is pulling its bikes out of several communities across the country, including from smaller cities in Colorado, Georgia, Virginia, and Wisconsin. Meanwhile, the scooter companies Lime and Bird have, together, laid off hundreds of workers.

And then there’s Jump by Uber. Earlier this week, video on social media spread of the company’s signature red bikes being loaded into a dumpster in North Carolina, frustrating bike advocates. The situation was a bit more complicated than Jump just trashing a bunch of bikes. In early May, Uber invested $140 million in Lime and, as part of the deal, transferred the Jump division to Lime.

“As part of our recent deal, Lime took possession of tens of thousands of new model Jump bikes and scooters,” an Uber spokesperson told Recode. “We explored donating the remaining, older-model bikes, but given many significant issues — including maintenance, liability, safety concerns, and a lack of consumer-grade charging equipment — we decided the best approach was to responsibly recycle them.”

Meanwhile, Jump service has been suspended in many cities, and in some places it’s unclear if their bikes will ever return to use. According to the Washington Post, Lime is currently operating in only 20 or so markets, which is a fraction of the 120 markets where its bikes are normally available.

When asked whether a more permanent shift to work from home could threaten the company’s long-term business model, David Spielfogel, chief policy officer at Lime, told Recode that he wasn’t worried.

“The data we’re seeing from our first few weeks suggests that people are probably relying on micromobility even more now to run their daily activities,” Spielfogel said.

So, if you want to take a ride this weekend, your best bet might be a bike-share program. That is, of course, assuming you don’t live in a city that recently got abandoned by these sometimes struggling companies.

But if you’re still looking to buy your own bike, Bjorling recommends getting in touch with your local bike shop as soon as you can as there might be a wait. There’s also nothing wrong with buying a used bike off Craigslist or just repairing your rusty old bike if it’s still workable.

“That’s just a great way to kind of get up and riding while you’re waiting for a new bike,“ Bjorling says. “The worst thing that can happen to a bike is if it just sits unused in a garage.“

What we can learn from quarantine videos around the world
How I’m using AI to write my next novel
British Prime Minister Boris Johnson tests positive for the coronavirus
LeBron James, the most important athlete in America, explained
Trump just encouraged 2 countries to interfere in the 2020 election — on camera
Did Biden’s South Carolina win come just in time for Super Tuesday — or too late?

Congress managed to agree on at least one thing: Avoiding a government shutdown

The world already had low views of the US due to Trump. The debate didn’t help.