Oklahoma teachers went on strike. Nearly 100 of them are now running for office to unseat Republican lawmakers. 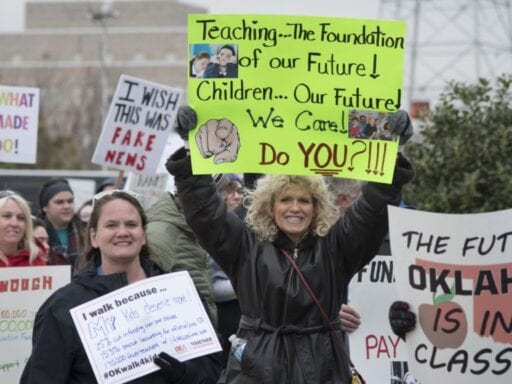 They are going after the state lawmakers who didn’t want to give teachers a raise.

First they went on strike, now they’re running for office. Nearly 100 public school teachers and administrators are on the ballot in Oklahoma’s primary elections on Tuesday, trying to unseat Republican lawmakers who fought their demands to spend more money on public education.

Many first-time candidates participated in the nine-day teacher strike in April that shut down more than half of the state’s public schools. Teachers pleaded with politicians at the state capitol to restore millions of dollars in school funding that has been cut from the state budget in recent years and to give teachers a raise for the first time in a decade. Lawmakers agreed to boost their salaries, but teachers grew frustrated over the resistance to discuss investment in public education.

The walkout may not have given teachers everything they asked for, but it has pushed education to the foreground of Oklahoma’s midterm elections. And it has motivated a record number of teachers to get involved in politics.

The crop of candidates running for the state legislature in this Tuesday’s primary includes: Carri Hicks, a fourth-grade teacher with three kids, Jacobi Crowley, a 25-year-old school counselor, and Angel Worth, a high school English teacher who works part-time at a grocery store. Most are running as Democrats, but many are Republicans, according to a tally by the Oklahoma Teacher Walkout Facebook group.

“As the primary draws near, one of the most important things we can all do is work to bring education to the forefront of voters’ minds once again!” Heath Eubanks, a vocational teacher who is running for state senate, wrote on the Oklahoma Teacher Walkout Facebook group page, along with dozens of other teacher candidates asking for volunteers to help knock on doors. “Any support you can offer, even if it’s just sharing a pro-education post, is greatly appreciated!!! Let’s restore the passion we saw in April!!!!! TOGETHER, we can do this!!!!”

Teachers are counting on momentum from the wave of teacher unrest to give them an edge over better-funded candidates. The strike was part of a historic, grassroots teachers’ movement that swept conservative states in early 2018, starting with the successful nine-day strike in West Virginia that closed every school in the state and forced lawmakers to give teachers a raise.

How Oklahoma teachers do at the polls will signal whether or not teachers across the country can translate their recent political activism into an established political force.

Lawmakers who voted against teacher raises are facing multiple challengers

When thousands of Oklahoma teachers walked out of class on April 2, they were rebelling against a decade of state tax cuts that triggered deep cuts in education spending, forcing about 20 percent of public schools to switch to a four-day-week schedule and pushing average teacher salaries to rank 49th in the country. Teachers hadn’t gotten a raise in 10 years.

Photos of their crumbling, outdated textbooks went viral on social media — a symbol of the dire condition of public education in Oklahoma. While public polls showed strong support for teachers’ decision to go on strike, lawmakers were less than thrilled with their demands to raise taxes for schools.

About two-dozen lawmakers in the state and house voted against a bill that gave teachers a $6,000 average pay raise by hiking taxes on cigarettes, gas drilling, and internet sales. The measure ultimately passed, but those who voted against it have faced teachers’ ire: “We will remember in November” teachers commented on Facebook as they passed around a list of lawmakers who voted against the measure or voted against attempts to open discussion on public education.

Their stance has made them the most vulnerable incumbents heading into Tuesday’s primary election. Ten of the 19 House Republicans in the state legislature who voted against the tax bill to give teachers a raise are now being challenged by at least one teacher or school administrator — in several races, three or four educators are challenging them.

The 63rd House District is one of those races. The conservative Southwestern Oklahoma district turned out heavily for Trump in 2016, and four educators (two Democrats and two Republicans) are vying for the seat held by Republican Jeff Coody, who is seeking a third term. Coody angered teachers for two reasons: He voted against the bill to give them a raise, but he also described their walkout as extortion.

“Regardless of Democrat or Republican, I think your representative should represent you, and if he doesn’t, then I think it’s time to go and say: ‘You’re not representing me, and I’m either going to vote someone in who does or I’m going to file myself,” Reynolds told the Chicago Tribune.

The race for the 80th House District seat, south of Tulsa, is another target for teachers. Incumbent Mike Ritze, a Republican, expressed mixed views about the teacher walkout, but ultimately voted against the teacher pay raise. He is now facing challenges from four teachers in his district — two Republicans and two Democrats.

Jennifer Youngberg, 36, a high school English teacher, participated in the teacher walkout and said she grew frustrated from her talks with Ritze. So she decided to run against him on the Democratic ticket.

“I had the opportunity to meet my representative, and I was highly disappointed in that meeting and the lack of support I felt as a public educator,” Youngberg told the Oklahoman newspaper on the day she filed her intention to run for office in April.

Two other high school English teachers and a retired teacher are also running against Ritze.

Other teachers said they filed for office after discouraging conversations with their representatives during the teacher walkout.

Cyndi Ralston, a second-grade teacher from Broken Arrow, Oklahoma, is running as a Democrat against Republican Kevin McDugle, who famously scolded teachers during the walkout in a Facebook live video that he later deleted.

Later that morning, Ralston announced on Facebook that she was going to run against him:

For years, my profession has been under siege by our legislature. Budget cut after budget cut have forced us to do ever more with ever less, and it cannot continue on this path. When my colleagues and I have visited our Republican representatives and senators, we have been brushed off, if not outright lied to.

Public education is a now a major voting issue in Oklahoma

The teacher strike has helped place education as a top issue on voters’ minds as they head to the polls. In an April poll of 644 likely Republican primary voters, about 19 percent said improving public schools was the top priority for them this year. The only other issue that surpassed education was the state budget crisis.

Of the three Republican front-runners to replace Gov. Mary Fallin’s open seat, the candidate with the largest “favorable” rating is the only one who has voiced support for the tax hike for teachers, Mick Cornett. His two main opponents, Kevin Stitt and Todd Lamb, criticized the bill and said they would not have signed it. The crowded Republican primary race for the governor’s office will likely lead to a runoff in August.

Oklahoma is still dealing with a budget crisis after lawmakers have slashed business taxes and top income tax rates year after year. A round went into effect in 2009, then taxes were lowered further in 2012 and 2014. The tax cuts were supposed to lead to an economic boom, but instead they triggered a massive budget gap of about $1.5 billion each year.

The teacher strikes across the United States are, in large part, a backlash to the tax-cutting frenzy that has swept Republican-controlled legislatures in recent years. The pay raise that Oklahoma lawmakers passed in March for teachers ahead of the walkout marked the first tax increase the state has passed in 30 years.

But teachers say the increase was not enough, and they are hoping that Oklahoma voters will agree.