Omar al-Bashir, deposed president of Sudan, has been sentenced to 2 years in a reform facility 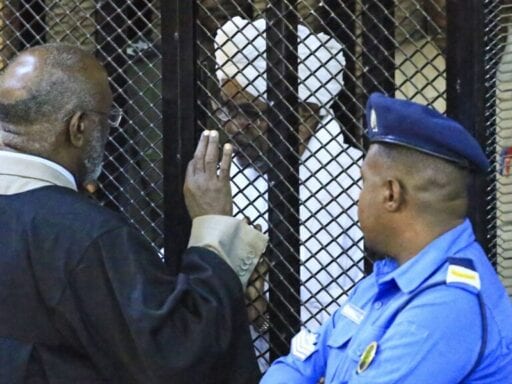 Al-Bashir was sentenced for corruption, but is also wanted by the International Criminal Court for war crimes.

Omar al-Bashir, the deposed former president of Sudan, was sentenced to two years of incarceration at a state run-reform center by a Sudanese court Saturday.

The verdict marked a the end of the first major test of the independence of the nation’s judiciary under its new government, and saw a key demand of protesters who helped bring al-Bashir down being met.

Al-Bashir ruled Sudan for 30 years before being removed in April by mass protests triggered by austerity measures. Those protests quickly broadened into a pro-democracy movement that demanded the former president face the courts over allegations of genocide and corruption.

The former leader has been replaced by a transitional government comprised of civilian and military leaders that has worked to assure the Sudanese people that the change they demanded is real. While some have voiced concerns over the pace of change — like the slow speed at which women, who were integral to the protests, have been appointed to key positions — officials hope al-Bashir’s will show they are committed to healing and reform.

While Bashir has faced allegations of misconduct on a number of counts, the trial that concluded Saturday was focused on financial wrongdoing. The court convicted al-Bashir on corruption charges, reaping illicit financial gains, illegal possession of foreign currency, and financial irregularity.

These charges carried a maximum prison sentence of 10 years; however, al-Bashir will serve only two. The judge said that under the law, al-Bashir should be sent to a reform facility rather than a prison because he is over 70 years old.

Authorities will also confiscate the foreign and national currency found in his home — prior to the trial, law enforcement officials found more than $130 million at this home in various currencies, at least $25 million of which al-Bashir said he received from Saudi Arabia’s Crown Prince Mohammed bin Salman. As Vox’s Jen Kirby has reported, Saudi Arabia has long exerted influence over Sudanese policy, and has employed child soldiers from the country in its conflict in Yemen.

The ruling does not represent the end of al-Bashir’s legal concerns. Mohamed al-Hassan, a lawyer for al-Bashir, said the trial was “political,” and that the former leader’s team will appeal the verdict. He also still faces cases concerning charges of incitement and his involvement in the killing of protesters earlier this year. And he has recently been questioned about his role in the 1989 coup that brought him to power.

Critics of this process argue it does not go far enough, however. He does not currently face any war crimes charges in Sudan over his connection to a genocide in Sudan’s Darfur region, and efforts by international leaders to bring the former dictator before the International Criminal Court (ICC) have failed.

“There is no justice, it is not enough to just try Bashir for corruption,” Sadiq Abdalla Mokhtar, an official in Darfur, told the Independent. “As his victims we should have the right to say how and where he is tried, and to us that is only the ICC.”

Many want al-Bashir to face war crimes and terrorism-related charges. It isn’t clear he will.

While the coup that first brought al-Bashir to power seemed as if it might end an ongoing internal conflict in the country, the former dictator’s rule was marked by bloodshed. Perhaps the worst instance of this was the genocide in Darfur, as Vox’s Jen Kirby has explained:

From 2003 to 2008, to fight insurgency in that region, [al-Bashir] relied on pro-government militias — known collectively as the “Janjaweed” — who carried out heinous atrocities, burning villages and murdering civilians. (UN estimates say about 300,000 people were killed.) Al-Bashir was charged by the International Criminal Court for overseeing the genocide in Darfur, effectively making him persona non grata on the international stage.

As the International Criminal Court (ICC) does not have the ability to make arrests itself, it depends on individual nations to make arrests and arrange for suspected criminals to be tried in the Hague, where the court is based.

“Sudan remains under a legal obligation to transfer these suspects to the ICC to stand trial unless it can demonstrate to the judges of the ICC that it is willing and able to genuinely prosecute them for the same cases,” ICC chief prosecutor Fatou Bensouda told the United Nations’ 15-member Security Council in June.

However, the Sudanese military has said it won’t be extraditing al-Bashir for a hearing, a position supported by the country’s new prime minister, Abdalla Hamdok, who has cast the issue of justice for those killed in Darfur and elsewhere as a local matter.

“Justice has to be seen and served to the satisfaction of the victims,” Hamdok has said. “We are not going to leave any stone unturned on this.”

US officials have concerns about al-Bashir that go beyond the charges he faces at the ICC. The US, which is not party to the agreement that set up the ICC, has accused al-Bashir of supporting terrorism by hosting Osama bin Laden, as well as conferences for extremists in the region. And the US has also accused the former dictator’s regime of being involved in the 1998 US embassy bombings and an attack on the USS Cole in 2000.

Hamdok has argued these issues are solvable, and has pushed for Sudan to be removed from the US’ list of state sponsors of terror, promising to settle with the families of those involved in the Cole attack and proposing the US and Sudanese governments collaborate on anti-terror initiatives.

As far as al-Bashir is concerned, the Sudanese government could still announce additional investigations and charges related to the genocide and terrorism, and officials have worked to make it clear they do not plan to stop with Saturday’s sentencing — or even to limit investigations to al-Bashir himself. His second wife was detained in early December for questioning about her financial activities, and the former leader himself will face charges related to the killing of protesters.

Why does the Pentagon keep getting surprised by Trump?
Are we morally obligated to meditate?
The Matrix 4 is happening. Keanu Reeves, Carrie Ann Moss, and Lana Wachowski will all return.
What does “vote” merch even mean in 2020?
The Impact in 2020
Kim Jong Un is alive. And he’s ... at a fertilizer factory.