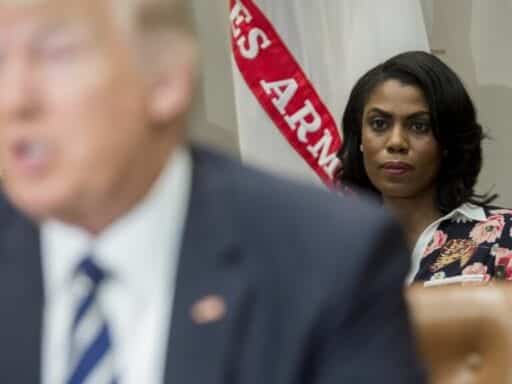 Manigault-Newman has recorded conversations with the president that she reportedly taped secretly during her time in the White House.

President Donald Trump’s decision to hire — and then fire — Omarosa Manigault-Newman is one he’s surely come to regret. The Apprentice contestant turned White House aide has turned on her former boss, including releasing secret recordings from the White House and accusing the president of using racist language.

Manigault-Newman, 44, is making the media rounds to promote her upcoming book, Unhinged, which was released on August 14. In the book, she makes a number of accusations, including that there’s a tape of Trump repeatedly using the n-word, that the president is in a state of mental deterioration, and that Trump used racial epithets when talking about Kellyanne Conway’s husband, George Conway, who has Filipino ancestry. (George Conway has called the allegations “ridiculous.”)

Given the rancorous nature of Manigault-Newman’s exit from the White House and her hints that she had a story to tell while appearing on CBS’s Celebrity Big Brother, it was anticipated that her book and media tour would bring some drama. And they have.

Why summer likely won’t save us from the coronavirus
Amber Guyger’s lawyers have taken the first step toward appealing her murder conviction
Vox Sentences: Turkey continues its slow slide toward authoritarianism
House Democrats just passed a bill to give DREAMers a pathway to citizenship
The jarring contrast between Trump and Biden, in 3 moments from their competing town halls
How Sundance films are probing the mushy nature of truth and fiction in 2020