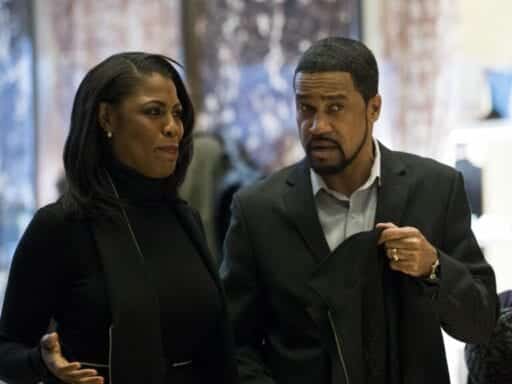 Omarosa Manigault-Newman — a contestant on The Apprentice turned former White House staffer — recorded Chief of Staff John Kelly as he fired her in the White House situation room. She’s got the tapes to prove it, and is playing them on national news, even as national security experts warn the move itself was incredibly risky and potentially illegal.

Manigault-Newman, who is currently on a press tour for her upcoming book, Unhinged, played the recording in an appearance on NBC’s Meet the Press with Chuck Todd on Sunday. She was abruptly fired from the White House in December, and according to some reports her departure was an acrimonious one. The Wall Street Journal reported she was “physically dragged and escorted off the campus,” citing one White House official, and the Daily Beast reported she tried to storm President Donald Trump’s residence and confront him before being let go.

Manigault-Newman told Todd she’s releasing the recording to prove that the circumstances of her ouster weren’t so turbulent. “If I did not have this recording, people would still believe the false, incredible story that I was running around the White House,” she said. She said she has “no regret” about making the recording.

The network then played part of the recording of Kelly speaking to Omarosa:

I think it’s important to understand that if we make this a friendly departure, we can all be, you know, we can look at your time here in the White House as a year of service to the nation. And then you can go on without any type of difficulty in the future relative to your reputation.

In later excerpts of the recording, Manigault-Newman pushes back on the decision, asking whether the president was “aware of what’s going on” and noting this was apparently the first time she’d spoken with Kelly.

Kelly told her it was a “non-negotiable discussion” and said her firing was tied to “pretty serious integrity violations.”

She said she would “love” for the White House to release her human resources file laying out the integrity issues Kelly mentioned in her firing. “Release it so that the American people can see that I worked my butt off to make a difference in this country, and they were looking for ways to frame me,” she said.

Manigault-Newman lobbed another accusation off: that the administration had tried to “buy off” her silence and push her into signing a nondisclosure agreement. She showed a job offer the Trump 2020 campaign sent her after she left the White House with an attached nondisclosure agreement she alleges was meant to preclude her from speaking out. She said she believes others who left the West Wing and Trump campaign have signed similar agreements and are essentially being paid to keep quiet. She did not, presumably, take the job or sign the agreement.

EXCLUSIVE: @OMAROSA reveals the Non-disclosure agreement that the Trump 2020 campaign offered her after she left the White House. #MTP@chucktodd: “You believe all these people that… left the West Wing and the campaign are being bought off?”@OMAROSA “Absolutely” pic.twitter.com/PWO4VUALeY

Omarosa recording from the situation room is not great

Regardless of the content of the recordings or of Manigault-Newman’s allegations, the fact that a White House aide was able to record from the situation room — one of the most secure conference rooms in the world — is disturbing. The 5,000-square-foot complex in the West Wing is where key national security discussions are held and decisions are made.

Many national security experts and former White House staffers expressed alarm at Manigault-Newman’s revelation that she recorded Kelly in the situation room.

Lawfare executive editor Susan Hennessey tweeted that Manigault-Newman’s recording was a breach of trust, a grave security risk, and a likely violation of the law.

We (rightly) talk a lot about Trump’s erosion of important norms. Omarosa held an office of public trust too. This is a breach of that trust, a grave security risk, and it likely violates the law. No one, regardless of party, should be applauding this. https://t.co/YTbL6usqOT

NO PROPER EMPLOYEE OF THE WH BRINGS PHONES INTO THE SITROOM. It’s totally prohibited. https://t.co/Sks5aYNXtB

Others expressed similar levels of alarm.

As someone who spent a fair amount of time in the Situation Room, I can’t even begin to wrap my head around how insane this is https://t.co/OC3Z8I0FKO

If Omarosa carried for example a cellphone into the Situation Room, then not only did she record conversations there, but so potentially has any country or criminal organization that thought to hack her phone

Who in their right mind thinks it’s appropriate to secretly record the White House chief of staff in the Situation Room?