On eating watermelon in front of white people: “I’m not as free as I thought” 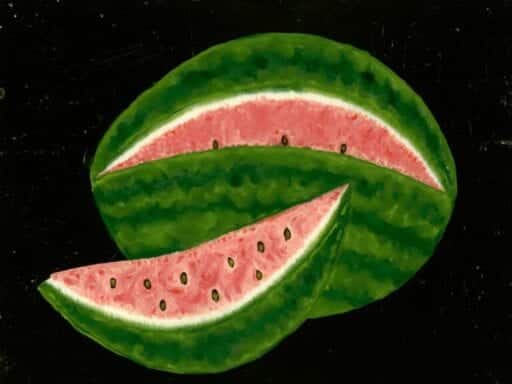 Racism has a powerful, sneaky way of inflicting shame.

My hand hovered over the fruit tray, about to spear a chunk of watermelon, when a white person walked up. I paused.

It didn’t matter that she was a colleague and likely focused, like I was, on getting a pre-lunch snack during a long meeting. I moved my fork carefully away from the watermelon, grazing over the pineapple and picked strawberries instead.

Anxiety made me reconsider my choice. It stopped me from enjoying watermelon on a scorching Mississippi day among an unusually diverse crowd of writers at an otherwise uneventful work training. But even though I was surrounded by many black and brown faces, it was the presence of white people — even these aware, friendly, and familiar white people — that gave me literal pause. I didn’t want to be an updated version of that Sambo figure, tap-dancing and braying in joy at a succulent watermelon wedge.

I couldn’t remember when this watermelon-shame seeped into my eating. I had eaten small triangles of watermelon on porches and at neighborhood cookouts since I was “knee high to a grasshopper” as a child. These were the only occasions that public spitting of the seeds — an uncouth habit, according to my parents — was allowed.

My mother covered our kitchen table with smudgy newspaper to catch the juice that ran down my scrawny arms. But those moments, I realized, were cloistered events within my family home, reunions, or the circle of our middle-class black neighborhood in North Carolina, where white families had fled the nice brick ranches when people like us arrived.

Yet between childhood and work meetings, something had changed. Maybe it was during the Obama era, when bitter and biased white public officials and “blacklashers” turned out in droves to post presidential watermelon “jokes” on Facebook. Banana-eating GIFs. Monkey memes. The first lady depicted as a monster. The commander-in-chief photoshopped into a historic Black Panther photo. At the same time some people were busy building postracial castles in the air — few black people among them — the pushback against a black president underlined the dangerous endurance of racism.

And when “they went low,” I went watermelon-less.

It is a sobering thing to face your interior white supremacist nag. I had mild indigestion all day, but it had nothing to do with the fruit itself. It was a profound unease that I, as a black historian who fancies myself informed and evolved, would be so complicit with a stereotype. I was angry with myself for letting racist rhetoric take over my tastebuds.

It was strange to apprehend: I’m not as free as I thought I was.

How watermelon became a racist stereotype

“Stereotype threat,” a friend matter-of-factly wrote on Facebook when I posted about my watermelon-eating fear.

In 1995, psychologists Claude Steele and Joshua Aronson coined the term, applying it to situations when people are “at risk of confirming … a negative stereotype about one’s group.” They applied the idea to education, studying the controversial question of whether stereotypes that black people are less smart make black students distance themselves from academic achievement; in their study, black students who heard that a half-hour test measured intelligence performed worse than white students.

While I don’t buy into the “culture of unachievement” narrative, I read a lesson in the research: that little worm of white supremacy had embedded its way into my consciousness and changed my behavior. That’s why I stopped myself from eating watermelon, frozen as a Kara Walker silhouette stuck in some gross two-dimensional human rights violation.

But how did this stereotype come to be? No fruit — with the exception of that troublesome apple Eve got blamed for — has been infused with such negative significance. It could be that the watermelon came to this country with a bit of a reputation as an Other; the fruit probably originated in arid African climates (ancient Egyptians even painted them or left them in pharaonic tombs, probably as water sources for the dead as they traveled thirsty between worlds). At some point, watermelons emigrated to the Mediterranean, and pink-fleshed, green-skinned melons — the ones we know so well today — began showing up in 17th-century still-life paintings.

Historian William Black takes a stab at answering this question in his recent journal article, “How Watermelons Became Black: Emancipation and the Origins of a Racist Trope.” He points to a post-Civil War genesis for racialized watermelon narratives. One theory: The fruit’s rapacious vines spread without much tending, rendering it the perfect produce for the lazy. Perverse racial logic then attached the watermelon to newly freed people, who built a nation in bondage but were slandered as indolent loafers after the Civil War. A watermelon’s size meant that consumption had to be a singular activity; one could not casually work and gnaw on this fruit.

As freed people entered the market economy — as wage earners, fruit-stand vendors, and emancipated hustlers — they sold watermelons in public squares and pocketed the money for themselves. Once the consumed, the nation’s essential free laborers became sellers and consumers, wrote Black. In the eyes of Southern whites, black people flaunted their freedom, disturbed the “natural” order of things, and had the nerve to eat what they pleased — and relish it. White supremacist haters took the most exception to black pleasure and enjoyment.

American media of the late 19th and early 20th centuries also thrived on the idea that black Americans had a pathological weakness for watermelon. Post-Civil War newspapers were filled with predictable anecdotes about black fruit thieves (often met by armed plantation owners who argued that their melons were an irresistible draw).

Medical journals wrote in scientific earnestness of the black patients — always black patients — whose intestines were clogged by watermelon seeds. An 1888 report by Dr. D.Z. Holliday of Harlem, Georgia, described how he broke down a bowel obstruction using rectal manipulation, a tobacco enema, and castor oil. Once the mass was “released,” he purported counted 820 seeds, ingested during one man’s night of watermelon bacchanalia. Such intemperate men could not be trusted.

Neither could such patently ridiculous stories, repeated until they masqueraded as truth. But the thing is, stereotypes tell on the stereotypers more than the vilified. White people tried to implicate black appetites and black character through watermelon. But they revealed the lengths to which they would go to define propriety and argue that black people were simpletons who needed to be controlled.

And here was this stereotype controlling me. And for what: something as mundane and harmless as whether I ate a piece of fruit. Toni Morrison once called this “racism’s lethal cling.” How would I disentangle myself?

Breaking through the trope

I polled black friends if they felt even the faintest watermelon unease. One had actually observed a white woman asking a black coworker if they had taken all the watermelon from a catering tray, clearly a funny quip in her mind. A former boarding school student assiduously dodged watermelon slices in the cafeteria. There was another friend who refused a free watermelon on the beach, afraid that the white man offering it was not generous, but trolling her in a nasty joke.

Much like agonizing over watermelon, another friend mused that she had packed leftover fried chicken for lunch that day, but had hoped to side-step the stigma by eating it real proper-like, with a fork and not with her teeth tearing the flesh off the bone.

Many of my online friends reveled in giving the finger to the white gaze, though. They ate watermelon with gusto whenever and wherever, laughing on the inside all the while — or on the outside, head thrown back Zora Neale Hurston-style. Some grew up in Caribbean or other countries where white colonialism had ruled, but they were free from the everyday indignities of Jim Crow. What white people thought just didn’t register with them.

Their confidence stung me a bit, even if their responses were not intended as rebukes. Apparently, I had not passed lessons in racial fortitude and carefree living in an unblushingly prejudiced society. More than a few pointed out that white people in the South are also great admirers of watermelon and fried chicken themselves. “Fakers!” exclaimed one. A doctor friend from Louisiana wrote: “Trying to shame us for things they do too is the white supremacy way.” I found myself nodding in agreement and talking out loud to my computer.

All this I understood — intellectually. But that telling pause and pivot, when I turned self-consciously from the melon and browsed the berries, lingered in my mind. I didn’t like the quiet, nearly undetectable creep of the white gaze. I asked myself if there were other places in my life where I practiced meaningless self-denial to be “middle-class respectable” and to not become a caricature incarnate. I came up with no answers, only the conclusion that one of racism’s superpowers is how it propagates illogical shame and projects it upon the undeserving.

After the fruit-tray epiphany, I decided that the only way to go was self-induced exposure therapy. I would eat watermelon in public, in white company, in work settings, from roadside stands.

And I did, with no fanfare, for the first time at another work conference. I piled my plastic plate high with watermelon chunks and smiled, chatting with collaborators. I ignored the jump of my pulse. If anyone noted my race, my plate, and how I watched them like a TV for any hint of a reaction, I didn’t notice.

As I kept eating, I did notice how pink and juicy the watermelon was. Perhaps it was an exceptional late-summer melon, the kind to savor on the front porch. Or maybe the sublime taste was the heightened sensation of liberation in progress, of the maligned melon becoming my freedom fruit.

Dr. Cynthia R. Greenlee is a North Carolina-based historian, journalist, and editor. Her writing has appeared in Literary Hub, Longreads, Smithsonian, and Vice, among others. Follow her on Twitter at @CynthiaGreenlee.

Far more women than men want to see Trump impeached
The case for raising kids in the city
The Air Force spent more at Trump’s Scottish resort than originally thought
This week in TikTok: When doctors and nurses go viral
A new editorial cartoon shows yet another racist depiction of Serena Williams
Rodham author Curtis Sittenfeld explains what it’s like to write in Hillary Clinton’s voice