On his last full day in office, Trump sinks to his lowest low in major polls 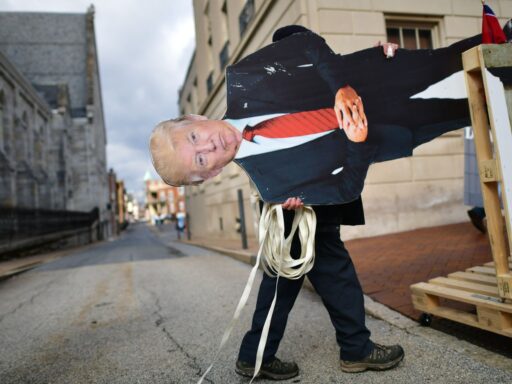 Presidents usually get a ratings bump as they leave office. Trump is seeing the opposite.

One of the most remarkable features of President Donald Trump’s presidency has been the consistency of his approval ratings. It seemed that regardless of whatever he said or did, his approval would hover roughly around 40 percent, perhaps ticking up or down a few points depending on the news cycle.

But on his final day in office, it has become apparent that the actions Trump has taken in the final weeks of his presidency — from refusing to concede the election to whipping up supporters who stormed the US Capitol — have caused the president’s support to sink lower than it has at almost any other point.

The lowest rating, however, was recorded by the Pew Research Center. Taken in the immediate aftermath of the insurrection at the capitol (January 8 to 12), it found only 29 percent of Americans approve of Trump’s job performance.

While individual polls record new lows for the president’s approval, FiveThirtyEight’s average is not the lowest it has ever been. This marker of support began to drop from nearly the moment he took office, eventually reaching 36.9 percent in August of 2017, following his response to the violent Unite the Right rally in Charlottesville, Virginia. His average approval rating rebounded at the beginning of 2018, after the summer and fall defeats of attempts to undo Obamacare and the winter passage of a divisive tax cut plan. After that, his average rating rarely dropped below 40 percent.

And never has support for the president fallen so quickly. These results represent a marked drop in support for the president. And both the timing of the decline (it appears to have started on January 7, one day after the Capitol insurrection) as well as the responses pollsters collected, indicate that Trump’s role in inciting a violent mob, as well as his subsequent impeachment on January 13, led to new heights of disapproval from the public — including among some Republicans who had previously stood by him.

The erosion of Trump’s support is caused by Republicans

According to Gallup, Trump’s job rating “remained more stable than those of his predecessors; it never surpassed 45 percent or dipped below 36 percent.”

Some of that solidity came from the stability of his Republican base; although Trump never quite achieved the near universal support among Republicans he claimed, he did regularly score in the mid-80s among Republicans.

Now, however, that has changed.

Other polls have similar findings. A CNN poll conducted by SSRS, taken between January 9 and 14, also found Trump to have the lowest approval rating of his presidency compared to previous CNN polls, with 34 percent of respondents approving of how Trump is handling his presidency. “Among his own partisans, Trump’s approval rating has dropped 14 points since October,” CNN’s analysis says.

Given these results, questions of response bias may arise; political scientists have found that politicians’ supporters are more likely to shun participation in polls when things are going poorly for their favored politician. And with an election loss, impeachment, “inciting violence against the Government of the United States,” and legal troubles on the horizon, things are not going well for Trump.

That being said, most polls have documented a clear and sudden drop that hasn’t been seen at previous low points in Trump’s presidency. And this suggests that there is more to the decline than response bias alone can explain.

Trump’s approval rating puts him at about half the level of approval of his immediate predecessor, Barack Obama, during his final days in office.

According to CNN’s Manu Raju, Trump ranks below a great number of previous presidents (though not all) in approval ratings before leaving office.

FiveThirtyEight’s net approval poll tracker for Trump has seen the biggest drop ever recorded in recent days. They identify only two other moments where the drops were so precipitate: when Republicans began their efforts to repeal Obamacare, and when Trump, shortly after taking office, issued executive orders to initiate what came to be known as his “Muslim ban” and to build his wall along the US-Mexican border.

What may be most striking about Trump’s low ratings as he prepares to leave Washington is that historically, presidents experience a bump in approval ratings in their final days, according to FiveThirtyEight. Even George W. Bush saw his (deeply underwater) net approval rise 13 points between the 2008 election and Obama’s inauguration — and this was in an unpopular second term that saw the country descend into a financial crisis.

For a ratings-obsessed president who routinely exaggerated his approval numbers, Trump’s unambiguous unpopularity as he steps down would seem to be a failure even in his own terms.

JBS Foods, the meat supplier hit by a ransomware attack, admits it paid $11 million in ransom
Photos: what Hurricane Michael’s destruction looks like on the ground
We asked 8 young people why they joined the global climate strike
Michael Cohen’s mysterious communiques with a big pharma company, explained
Trump wants the Supreme Court to let him weaponize the census against immigrants
A delicious feast of food movies