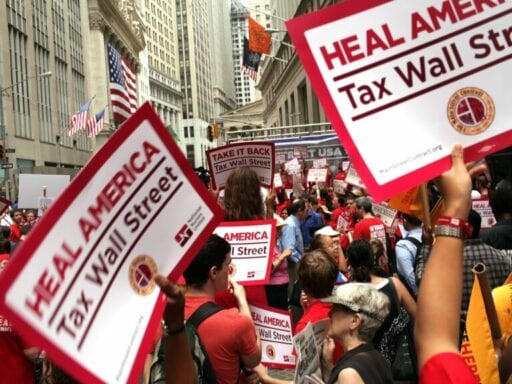 The income share of the poorest half of Americans is declining while the richest have grabbed more. In Europe, it’s not happening.

Income inequality is a growing problem in the United States. The richest Americans have reaped a disproportional amount of economic growth while worker wages have failed to keep pace. And the $1.5-trillion Republican-passed tax cuts from December stand to make the situation worse.

One chart from the 2018 World Inequality Report highlights the unique nature of income inequality in the US compared to other developed regions — namely, Western Europe. And the contrast is stark.

From 1980 to 2016, the poorest half of the US population has seen its share of income steadily decline, and the top 1 percent have grabbed more. In Europe, the same trend can’t be observed.

The economists behind the report — Facundo Alvaredo, Lucas Chancel, Thomas Piketty, Emmanuel Saez, and Gabriel Zucman — lay out an explanation of what’s happening:

The income-inequality trajectory observed in the United States is largely due to massive educational inequalities, combined with a tax system that grew less progressive despite a surge in top labor compensation since the 1980s, and in top capital incomes in the 2000s. Continental Europe meanwhile saw a lesser decline in its tax progressivity, while wage inequality was also moderated by educational and wage-setting policies that were relatively more favorable to low and middle-income groups. In both regions, income inequality between men and women has declined but remains particularly strong at the top of the distribution.

The 2018 World Inequality Report was released in December 2017.

To be sure, wealth inequality is a global problem, and ranked among all nations, the United States does better than dozens of countries. But the visualization of how much the switch has flipped on the richest and poorest Americans over the past two decades is stunning.

Vox’s Dylan Matthews in 2017 highlighted research from Pikkety, Saez, and Zucman — three of the researchers behind the World Inequality Report — also examining how much income gains have gone to the super-rich in recent decades instead of the middle and lower class. From 1946 to 1980, the middle class and poor were actually seeing their pay growth outpace that of the rich. But since then, the trend has moved sharply in the opposite direction.

The Broken Economy of the United States, in One Simple Chart https://t.co/HPqxHDUmsC pic.twitter.com/5SnIx3TiLr

The economists behind the World Inequality Report explain the divergence between the US and Europe, but there are a number of factors that could be driving income inequality in the US more broadly. Still, it’s unlikely that the GOP tax bill will help. Passed in December, the legislation reduced the corporate tax rate to 21 percent from 35 percent and disproportionately benefits businesses and the wealthy.

Taxes aren’t the only matter in play in income inequality, but they’re part of it. And the tax cuts aren’t helping.

The appeal of the TikTok everyhouse
US troops aim to stay out of partisan events. Both parties used them as convention props.
The next president can force the financial sector to take climate change seriously
3 key themes in Ted Cruz and Beto O’Rourke’s first face-off
1 in 4 rural hospitals is vulnerable to closure, a new report finds
A day in name-changing court