One day encapsulated everything that’s wrong with Fox News 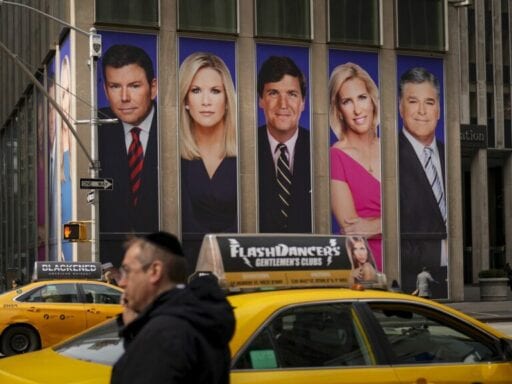 From revelations about spreading Russian propaganda to making racist attacks, July 9 had it all.

Tuesday was an especially ugly day for Fox News.

It began with revelations that host Sean Hannity helped spread Russian propaganda about Seth Rich’s murder. It ended with an astoundingly racist attack on Rep. Ilhan Omar (D-MN) by host Tucker Carlson. In between, hosts slut-shamed sexual assault accusers and spread misinformation about former President Barack Obama. Put everything together and it encapsulated all the channel’s worst impulses.

Take Carlson’s increasingly aggressive attacks against Trump administration adversaries, which culminated with his xenophobic indictment of Omar, a Somali refugee and one of the first Muslim women to serve in Congress: He attacked her as “living proof that the way we practice immigration has become dangerous to this country.”

And yet through it all, President Donald Trump continued to amplify the network’s content on Twitter, illustrating how far off the rails both the president and the cable news network he can’t stop watching — the top-rated one in the country — have gone.

Hannity got played by Russian propagandists

Early Tuesday, Yahoo News published Michael Isikoff’s in-depth report on the origins of the conspiracy theory about Seth Rich, a Democratic National Committee staffer who was killed on the streets of Washington, DC, in July 2016.

Three years later, Rich’s killing remains unsolved, though police investigators believe it was a robbery gone wrong. But shortly after it happened, Rich’s demise became subject of a right-wing conspiracy theory that held he was murdered because he had leaked DNC emails to WikiLeaks — a claim that, if true, would indicate that the US intelligence community’s conclusions about Russia being behind the hacks of Democratic targets in 2016 were mistaken.

According to Isikoff’s account, this conspiracy theory originated from a baseless intelligence “bulletin” put together and disseminated by Russia’s foreign intelligence service, which is known as the SVR. Details from the bulletin were posted on an obscure website that often spreads Russian propaganda, WhatDoesItMean.com, and eventually made their way onto the airwaves of Sean Hannity’s Fox News show.

The conspiracy claims reached their zenith in May 2017 — the same week as Mueller’s appointment as special counsel in the Russia probe — when Fox News’ website posted a sensational story claiming that an FBI forensic report had discovered evidence on Rich’s laptop that he had been in communication with WikiLeaks prior to his death. Sean Hannity, the network’s primetime star, treated the account as major news on his nightly broadcast, calling it “explosive” and proclaiming it “might expose the single biggest fraud, lies, perpetrated on the American people by the media and the Democrats in our history.”

Among Hannity’s guests that week who echoed his version of events was conservative lawyer Jay Sekulow. Although neither he nor Hannity mentioned it, Sekulow had just been hired as one of Trump’s lead lawyers in the Russia investigation. “It sure doesn’t look like a robbery,” said Sekulow on Hannity’s show on May 18, 2017, during a segment devoted to the Rich case. “There’s one thing this thing undercuts is this whole Russia argument, [which] is such subterfuge,” he added.

According to DC investigators, Fox News’s story was completely bogus. It was quickly retracted, and Fox News announced it was conducting an internal investigation to determine how it was published in the first place. But more than two years later, not only have the results of that investigation not been disclosed, but Hannity has never apologized for promoting the conspiracy theory on his show.

So not only does Isikoff’s story reveal that Fox News unwittingly spread Russian propaganda that was meant to sow doubt about the Kremlin’s role in hacking the DNC, but according to the interviews Isikoff did with Rich’s family, the network unrepentantly traumatized the relatives of a murder victim in the process.

About 12 hours after Isikoff’s story dropped, Tucker Carlson, a primetime host with a show preceding Hannity’s that has repeatedly come under criticism for promoting white nationalist themes, uncorked an attack on Rep. Ilhan Omar (D-MN) that was beyond the pale.

During a monologue toward the end of his show, Carlson characterized Omar — a Somali refugee who, along with Rep. Rashida Tlaib (D-MI), became one of the first Muslim women to serve in Congress earlier this year — as “living proof that the way we practice immigration has become dangerous to this country.”

“She has undisguised contempt for the United States and its people,” Carlson said, citing no evidence and ignoring that 78 percent of voters who cast ballots in Omar’s Minneapolis district voted for her last year. “No country can import large numbers of people who hate it and expect to survive … she’s a living fire alarm, a warning to rest of us that we better change our immigration system immediately — or else.”

She “is a living fire alarm. A warning to the rest of us that we better change our immigration. Or else” pic.twitter.com/p2IQWsqP5Q

Not gonna lie, it’s kinda fun watching a racist fool like this weeping about my presence in Congress

No lies will stamp out my love for this country or my resolve to make our union more perfect.

They will just have to get used to calling me Congresswoman! https://t.co/nRS13yWivK

On Wednesday, Omar posted another tweet, alluding to the idea that advertisers could boycott Carlson’s show.

“Fox News is now giving a nightly platform to white supremacist rhetoric. It’s dangerous,” she wrote. “Advertisers should not be underwriting hate speech.”

Fox News quickly seized the opportunity to try and twist Carlson’s attack on Omar into a controversy about free speech. In a statement sent to Vox, Justin Wells, senior executive producer of Carlson’s show, wrote that “[a]nyone who values democracy and free expression should be gravely concerned when members of Congress demand that their critics be silenced. Tucker will address this on tonight’s show.”

In the end, however, Carlson smeared a sitting member of Congress as a traitor who is actively working to destroy the country whose Constitution she’s sworn to support and defend. It’s not hard to imagine how somebody watching his show could come away with the idea that Omar is one of the most dangerous people in the country.

Carlson’s monologue illustrated not only how Fox News promotes white nationalist themes but also how those themes are deployed to radicalize people. But Carlson’s attack on Omar was only one of the ugly broadsides made by a Fox News primetime host on Tuesday evening.

Immediately following Hannity’s show, Fox News host Laura Ingraham and the Federalist senior editor Mollie Hemingway teamed up to slut-shame Christine Blasey Ford, the woman who came forward late last summer with her statement that then-Supreme Court nominee Brett Kavanaugh had sexually assaulted her when they were in high school.

Hemingway, promoting her new book, sought to discredit Ford by describing her as “a heavy drinker who was much more aggressive with boys than we were led to believe” when she was in high school.

Ingraham didn’t register any objection to Hemingway’s smears, but instead reinforced them, saying, “When you scrub your social media profile, that’s a statement, is it not?”

Mollie Hemingway says Christine Blasey Ford was “a heavy drinker who was much more aggressive with boys than we were lead to believe” in high school pic.twitter.com/QXuEdWVaNU

And that’s not all. Earlier in the day on Tuesday, Fox News used the arrest of Jeffrey Epstein — a convicted sex offender with ties to Bill Clinton and Donald Trump — to launch a misinformed attack on President Barack Obama.

Afternoon host Harris Faulkner and Campus Reform editor Lawrence Jones III blamed Obama for the sweetheart plea deal Epstein received in 2008 from Alexander Acosta, a former US attorney who now serves as Trump’s secretary of labor — even though Obama wasn’t even inaugurated as president until January 2009.

Here’s @LawrenceBJones3 and Fox News’s @HARRISFAULKNER blaming Jeffrey Epstein’s sweetheart plea deal on President Obama, who wasn’t even in office when it was struck in 2008 ‍♂️ (they both seem to think Obama was president then)

And on Fox & Friends, hosts allowed White House counselor Kellyanne Conway to spread misinformation about the US census with impunity.

Yet just on Tuesday alone, Trump posted six tweets that either directly promoted Fox News programming or featured video clips from Fox News shows. And on Wednesday morning, he retweeted a post from right-wing commentator Mark Levin that attacked CNN host John Berman for criticizing Carlson’s latest attack on Omar as “what to many is just a racist comment — a flat-out racist comment or offensive comment suggesting that people shouldn’t be allowed in the country.”

Here’s how the president is reacting to Tucker Carlson’s viciously racist attack on Ilhan Omar pic.twitter.com/dWFsDjtnPG

Tuesday may have been an especially ugly day for Fox News, but it wasn’t particularly unusual. The network regularly comes under fire for spreading conspiracy theories, amplifying white nationalist themes, and pulling out all the stops to demean critics of President Trump.

So while groups like Media Matters and Sleeping Giants continue to pressure advertisers to sever their business relationships with Fox News in response to racist attacks like the one Carlson made on Omar on Tuesday night, viewers — including the current occupant of the White House — continue to buy what Fox News sells them, no matter how ugly or inaccurate it may be.

The Super Bowl commercials were really bad this year, huh?
“Hair can wait”: A stylist on what it’s like to go back to work in Georgia
Trump’s feud with California over emissions standards and homelessness, explained
Why cashier’s checks are part of so many online scams
Beyoncé’s attention-grabbing Vogue cover, explained
The driving force behind cultural appropriation? Capitalism.