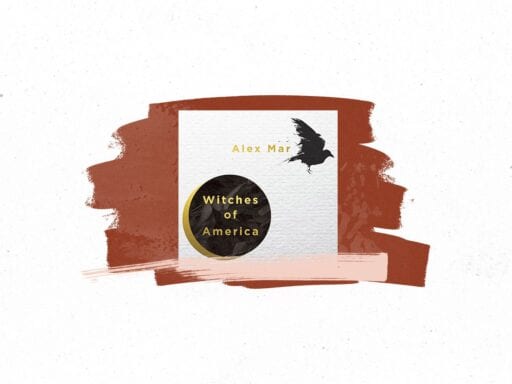 Alex Mar’s 2015 book “Witches of America” is about a lot more than witches.

As an evangelical kid in the 1980s and ‘90s, I devoured Peretti’s novels, which I found in the church library. They were Christian horror mixed with comic-book-style battles, although there weren’t any pictures involved.

Bestsellers that some churches evidently began to regard as manuals for “spiritual warfare,” with titles like This Present Darkness and Prophet, they were dense with angels and demons summoned by small-town folks. Their plots were full of good, decent church people who prayed, and angels came; bad church people, who didn’t really believe and had demons invisibly skulking around them; and “ordinary” people — newscasters, elementary-school teachers, councilmen, professors at the local college — who summoned demons on purpose, engaging in seances, rituals, and, if I remember correctly, even blood sacrifices in order to please the Prince of Darkness and his minions.

It was the era of the Satanic Panic, after all.

On the surface, Peretti has very little to do with Witches of America, but when I first read Mar’s elegant, earnest memoir-history-journalism hybrid, I thought about his work anyhow. Peretti’s novels were my first (and, to be honest, entire) introduction to the world of paganism and witchcraft. I hadn’t earnestly thought about those topics at all as an adult. And so the stereotype of the modern witch — who, in Peretti’s stories, was usually a devious, scheming, evil-intentioned woman who lured men into her snares so they would do her bidding — loomed somewhere in the back of my mind.

When I picked up Mar’s book, it was out of a longstanding interest in religion writing, the exploration of belief systems that are outside the mainstream and like it that way. (Also, I had just started watching Buffy the Vampire Slayer.)

And I found so much more than I expected. Witches of America is deeply researched, giving a long history of witches and witchcraft and, more specifically, the European roots of Wicca, which Mar positions as the parent of one big strain in the modern witchcraft movement. She weaves history into the narrative carefully, like a dark-red thread through a tapestry. By the end, you haven’t learned everything about modern witches — that would be impossible to cover in a single volume — but you’ve learned quite a bit.

But the history may be the least interesting part of the book. Another rich stripe comes in the form of intimate reportage, as Mar engages with several pagan communities and follows key figures to create a portrait of the people who practice these religions. The most memorable is Morpheus, a priestess devoted to the ancient Celtic goddess known as “the Morrigan.” Mar met Morpheus when she was making American Mystic, Mar’s 2010 documentary that premiered at the Tribeca Film Festival. The movie is interesting in its own right, a modest and intimate look at Americans in three religious communities that exist on the fringes of American society: a Lakota Sioux sundancer, a Spiritualist medium, and Morpheus.

But it turns out that making the film only scratched the surface of Mar’s interest in witchcraft, and Witches of America became her next project. Mar follows Morpheus for several years, visiting her over the seasons as she engages in her community’s rituals and goes to conventions. One of the book’s most memorable scenes is set at the 2012 PantheaCon, a gathering for American Pagans at a DoubleTree Hotel in San Jose, California, where Morpheus channels the Morrigan and, later, Mar participates in an exorcism — though it’s nothing like what you might know from The Exorcist.

She eventually moves on to other practitioners and communities, but what makes Witches of America unforgettable isn’t only the encounters Mar has with witchcraft practitioners — it’s also what she experiences herself.

After the book was published, Mar came under fire from some in the pagan community for being, in essence, a religious tourist, and for failing to fully represent the people she wrote about. All of which is a common risk for any book of nonfiction.

But it’s hard to read Witches of America and not understand it as a work of someone who longs to be part of what she sees but has trouble getting there. Throughout the book, Mar describes herself as a skeptical New Yorker, attuned to second-guessing every experience she has. Even when she begins studying witchcraft seriously with a woman Morpheus recommends, she feels a little on the outside, unsure of whether she will ever belong to the community, or if she wants to. She ends the book in much the same place: a skeptic, having observed all of the religious experiences and wishing she could be part of them.

Near the end, she’s spending the night in a swamp as part of a ritual designed to foster wisdom and revelation in the participant. “Here in the dark confines of the swamp, I’ve lost perspective,” she writes. “How can I tell the difference between a transcendent experience and the desire for transcendence? Between magic and the hope of magic?”

A few pages later, she starts to have a true self-realization that helps put the rest of the book into perspective:

In the days and weeks that follow the ceremony in the swamp, after I’m no longer drunk on it, I will realize that I am just as much a priest as Josh is, or Karina or Morpheus, and I have just as much ritual in my life, because I have built that ritual, built it around the thing I live for — which is this, the collecting and scrubbing and remixing and chiseling out of other people’s stories. And this collecting and connecting with others, sometimes as a kind of trick, as a way of getting what I need, necessarily draws me out of myself and mixes Me up with Them, and we all become part of a new beast in the writing of it.

This is what I found so moving about Witches of America. Aside from history or ethnology or a piece of longform journalism about a hidden world, it’s a vulnerable story about one woman who’s looking for community and meaning.

And not just one woman, really. Unlike the wild-eyed portraits painted by Peretti’s novels and by Hollywood and by the remnants of the Satanic Panic, Witches of America delivers an empathetic, thoughtful profile — clearly written with love — of a whole community of people seeking to touch something together, to be in touch with their humanity and the world around them in a way that most people miss. They are interested in power, in summoning something larger than them, but the scheming deviousness of Peretti’s novels is gone. And of course it is — they’re people, not cartoons.

Witches of America does what good religious journalism has always done: It takes people at their word and sees their beliefs as both integral to who they are and not determinative of their entire individuality. I found the book fascinating, but even more so, I found that it challenged my preconceptions in a whole new way — and maybe a slightly witchy one, too. What we think we know about the world may be just a slice of the whole picture.

Witches of America was published in 2015 by Sarah Crichton Books.

Uber Eats doesn’t plan on eating its competition — for now
2018 Republican nominees don’t want to talk about Trump
People are still being punished for “Living While Black.” Now one man is taking legal action.
The next challenge for plant-based meat: winning the price war against animal meat
Why some colleges are winning against Covid-19, and others are losing
Trump continues purging inspectors general, removing a State Department watchdog