One Good Thing: After the NBA walkout, the movie of the week is Netflix’s High Flying Bird 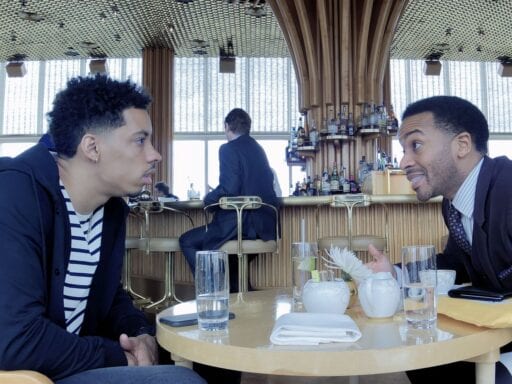 At the end of High Flying Bird, a rookie NBA player receives a gift bestowed to him by his former agent: 1969’s seminal The Revolt of the Black Athlete, by sociologist and civil rights activist Harry Edwards.

It is then that the full meaning of Steven Soderbergh’s unconventional sports drama, released on Netflix in February 2019, becomes clear. In a crisp 90 minutes, the film covers thorny issues of labor and class, of dreams lost and found, of the pressure to deliver when millions of dollars, livelihoods and legacies, are on the line.

But it is also a film about Black athlete empowerment. That makes it unusual for a Soderbergh picture; it’s one of the director’s few films with a non-white protagonist. High Flying Bird was written by Tarell Alvin McCraney, who helped adapt his own stage play In Moonlight Black Boys Look Blue into the Best Picture winner Moonlight in 2016. High Flying Bird possesses that film’s same clarity about the predicament of Black people in America and likewise conveys its weighty themes with uncanny subtlety.

And so on top of being a slyly funny and consistently engaging sports spin on more traditional legal dramas, High Flying Bird also feels especially resonant in the days after NBA players stopped playoff games in an unprecedented protest following the shooting of Jacob Blake in Kenosha, Wisconsin.

The circumstances of the plot could not be more different than the situation the NBA finds itself in today. The NBA is currently completing its season in a Disney World bubble during a pandemic. This week, after the police shooting of Jacob Blake in Wisconsin, players decided not to play their scheduled games to send a message to the league, especially its largely white owners, about the need to be politically engaged.

In the film, the inciting incident is more mundane: The NBA has come to a standstill because of a contract dispute between the players union and the owners. Sports agent Ray Burke, played by Moonlight’s Andre Holland, must figure out how to tide over his new client, a promising rookie named Erick Scott, and end the lockout.

Yet the same power dynamic that led to this week’s extraordinary events, in which boycotting players persuaded their owners to turn basketball arenas into voting centers, is essential to the film’s narrative.

Burke explains in the opening scene the leverage that his client, as a star player-in-waiting, enjoys over his much more monied employers: “In order to move merch and inspire rap lyrics, they need your services. Too much money at stake.”

The story that follows is told with the kind of cinematic authenticity that typifies most of Soderbergh’s later work. The fictional narrative is intercut by interviews of real NBA players explaining the difficult transition to professional sports, when teenagers a year out of high school and too young to drink receive contracts worth tens of millions of dollars. The film was shot on iPhones (with an anamorphic lens attached) to bring you to the table at a high-end restaurant and inside the cab where a critical meeting takes place. It possesses a propulsive energy thanks to the dialogue of McCraney’s script and Soderbergh’s editing.

On one level, watching Burke, Sonja Sohn’s players union president, and Zazie Beetz’s hypercompetent assistant try to outmaneuver one another and the NBA, personified by a smarmy attorney played by Kyle McLaughlin, is a breeze. They are smart people, who care about their jobs and do them well, with a knack for the withering one-liner. Melvin Gregg of American Vandal and Snowfall, who plays Burke’s rookie client, convincingly conveys both the reckless ego and the insecurity of an 18-year-old about to become unthinkably rich and famous.

But the racial politics are never far from the surface. In an early scene, Bill Duke’s wizened coach reminds Burke of why the NBA integrated Black players in the first place: The Harlem Globetrotters had become so popular that NBA owners worried they would be supplanted by a form of basketball played, and controlled, by Black athletes.

“They wanted control of a game we play better,” Duke’s character says. “They invented a game on top of a game.”

But the players still hold powerful cards. Indirectly, Duke’s history lesson gives Burke the inspiration he’ll need to help the NBA players use their leverage against the league, get the contract dispute settled, and start the games back up again.

It’s in the film’s opening scene that Burke hands Scott a wrapped copy of The Revolt of the Black Athlete, describing it as “a Bible” of sorts. But it’s not until the end that Beetz’s character opens it for him, starts reading it herself, and tells Scott: “You need to read this.”

These are some of the words the rookie would have read in Edwards’s book, from a 2016 Vice profile of the author:

“We had learned the use of power–the power to be gained from exploiting the white man’s economic and almost religious involvement in athletics,” Edwards wrote in The Revolt of the Black Athlete. “The revolt of the black athlete in America as a phase of the overall black liberation movement is as legitimate as the sit-ins, the freedom rides, or any other manifestation of Afro-American efforts to gain freedom.”

“The goals of the revolt likewise are the same as those of any other legitimate phase of the movement–equality, justice, the regaining of black dignity lost during three hundred years of abject slavery, and the attainment of the basic human and civil rights guaranteed by the United States Constitution and the concept of American democracy.”

It was those precepts that the NBA players of our world put to use this week.

Edwards spoke highly of their unprecedented protest and urged them to work toward concrete ends. On Friday, after being advised by Edwards among others, the NBA players union announced the deal it had reached with the league’s owners to end the boycott and resume play. The agreement included a commitment to convert arenas into voting centers and a pledge to spend money on advertising to encourage civic engagement ahead of the 2020 election.

“The athletes who are boycotting today with the NBA are sending a message: We are serious about this,” Edwards told Yahoo! Sports. “Stop killing us! It’s more important that we deal with that than we play a basketball game and entertain you out here. Stop killing us.”

Pro basketball affords Black Americans, disadvantaged and discounted in so many other parts of American political life, an unparalleled platform. That is something the characters in High Flying Bird and the players in the NBA today understand well.