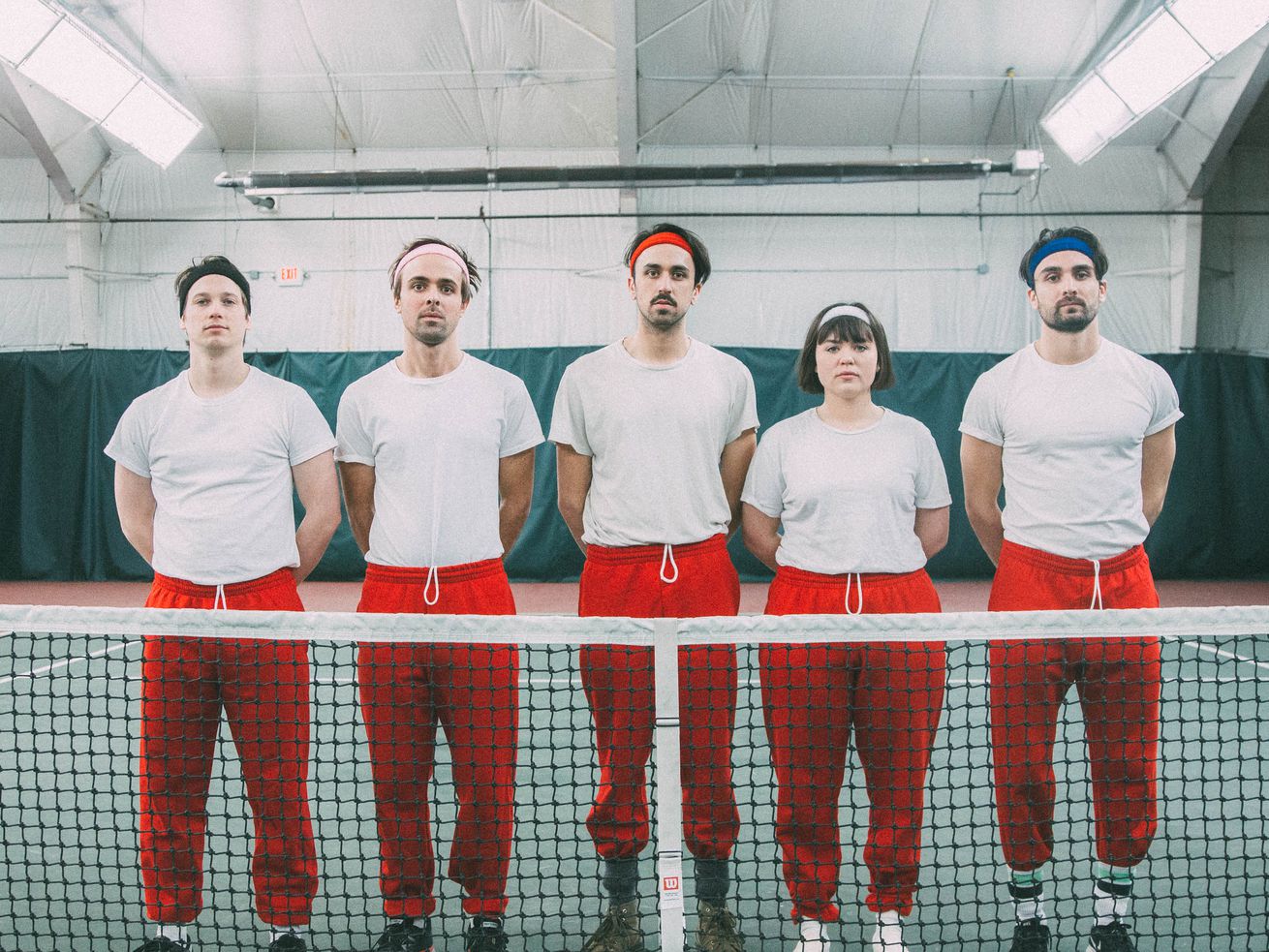 The five-piece group might make you miss hearing a band you’ve never heard of in concert.

If you were to ask me to name the qualities that unite most of my favorite bands, I think I would say, “a great bar band that sounds like it might write an amazing Broadway musical.” The New York-based rock quintet Fever Dolls meets and far surpasses that standard. Not only can I not wait for the band’s first full-length album whenever it should arrive, but I’m also very excited for the day when its members mount a musical adaptation of No Country for Old Men or something.

Cofounders Evan Allis and Renn Mulloy, who started the Fever Dolls in 2018 in Burlington, Vermont, took the band’s name from two seemingly opposing creative influences: proto punk band the New York Dolls and the disco-infused soundtrack to Saturday Night Fever (the film that made “Stayin’ Alive” famous). Yet listen to many of the Fever Dolls’ best tracks, currently available as a handful of singles and a five-song EP, and you might detect a hint of country and bluegrass poking through.

This is to say that Fever Dolls seem to borrow from an entirely new set of artistic influences on each and every track, while still sounding like themselves. That “musical mishmash” quality can get exhausting, but the few bands who’ve figured out how to navigate it have often become my absolute favorites. (See also: the New Pornographers, for a band that blends a huge number of influences into something weirdly coherent and cohesive.)

Sidebar: I wonder if musical eclecticism is a good thing for bands who might hope to find new listeners on Spotify. The streaming service served me three different Fever Dolls songs, in three very different contexts, before I put together that all of them were by the same band, whom I quickly became obsessed with. I have to imagine that incorporating several different influences helps bands reach lots of users who listen to different kinds of music.

One nice thing about getting on board with Fever Dolls at this point in their evolution is that the group has just nine songs that have been publicly released. Their first full album (assuming they record one someday) is still somewhere in the hazy future. That fact makes it easy to consume the entire catalog of Fever Dolls music in an hour, to realize just how many different styles the group pulls into its music, while always remaining within the world of indie rock.

Of these nine songs, I particularly enjoy the arena rock-adjacent “The Distance,” the acoustic lament “Mrs. Carver,” and the more straightforwardly danceable “Out of Vogue.” But by far my favorite Fever Dolls song — as in “this is basically the only song I have listened to for two straight weeks” — is “All the Best Debts.”

“All the Best Debts” was consciously written by co-founder Allis as a song the band could play at the start of sets during shows where they appeared in the lineup with other acts. The song was designed to be compelling to people who came to see someone else, in hopes of convincing them to stick around and listen to what Fever Dolls have to offer. As such, it starts small and gradually builds in intensity, finding ways to highlight each and every member of the five-piece ensemble, with particular highlights for lead singer Mulloy and bassist Mitchell Parrish. By the end, “All the Best Debts” has a vaguely operatic quality, while remaining the sort of song you might not be surprised to hear the world’s best band play in the world’s worst dive bar.

The song also makes good on my “I’ll bet Fever Dolls would write a good musical…” notion, because for all its indie rock trappings, “All the Best Debts” is structured almost exactly like the opener to a musical that slowly introduces its major characters across the course of its opening tune. It’s a neat trick, and it strikes me as a near-perfect concert opener (though who’s going to concerts right now?).

But I have more personal reasons for recommending an obscure indie band, even one whose music I like as much as I like Fever Dolls’ songs. I have a firm belief that the right art finds us exactly when we need it most. Taylor Swift’s “Mine” will always be the soundtrack to a rough spot in my marriage that my wife and I have since overcome, while Gang of Youths’ “The Heart Is a Muscle” was pretty much all I listened to in the month before I came out publicly as a trans woman. “All the Best Debts” has served a similar purpose.

I first heard the song recently, while driving through the New Mexico desert on a trip I had taken to intentionally confront a difficult pain from my past. I listened to it one time. And then again. And again. And again. I’m still listening to the song on repeat; somewhere inside of it, I can hear a vague reassurance that while my pain is real, and my pain is awful, and my pain feels like it will destroy me all too often, there are other people out there who are waiting to lift me up, even if they don’t know they are.

I have absolutely no idea what inspired Fever Dolls to write this song, but I know that when I hear the lyric “So when you tell them that you saw me tell them I took the long way out,” I feel a little bit more seen. And that’s one of the most powerful gifts art can give us.

Music by Fever Dolls is available on all major music streaming platforms. For more recommendations from the world of culture, check out the One Good Thing archives.