One Good Thing: Netflix’s Dash & Lily is a sweet TV rom-com with a Christmas twist 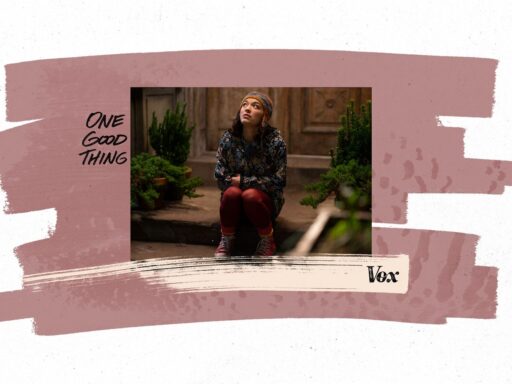 If there’s one thing I know for sure about myself, it’s this: I would be amazing at taking part in a whirlwind love story that unfolds during a romantically charged week at Christmastime in New York. From the meet-cute to the unexpected connection with a total stranger, it’s something I feel born to do.

Alas, I live in Los Angeles, and even if I lived in New York, now doesn’t seem like the best time to be having a whirlwind love story with someone I’ve never met. So I’ll just have to live out my dreams vicariously through a Netflix young adult series!

Dash & Lily, the streaming service’s new eight-episode rom-com about two teens who fall in love thanks to a plot device, based on the novel by Rachel Cohn and David Levithan, is so twee and candy-cane sweet that it should rot your teeth. But even though I tried to resist the charms of Dash, Lily, and all their pals, something about Dash & Lily drew me in, until I had to know if these two crazy kids were going to get together. (No spoilers, but it’s a rom-com set in New York during the holiday season. You can probably guess how it’s going to play out.)

Dash (Austin Abrams) is a teenage curmudgeon who hates Christmas but is thrilled that both of his divorced parents are traveling for the holidays because they each think he’s staying with the other and don’t have to worry about him. He’s pumped to spend the whole holiday season just hanging out in his dad’s opulent apartment and bopping around the city visiting friends.

Lily (Midori Francis) is a teenage ray of sunshine who adores Christmas and is a little heartbroken at the thought of having to spend the holiday without her parents (who have gone on a romantic getaway to Fiji) and grandpa (who’s off to see his girlfriend in Florida). Sure, she’s got her older brother Langston to watch over her, but what if Christmas ends up being kind of a bummer? Also, she’s never been kissed?

Lily, in the hope of landing in her very own magical Christmastime romance, leaves a red notebook on the shelf of famed bookstore The Strand. (She leaves it in the J.D. Salinger section, meaning she’s exactly as extra as I was as a teen.) The notebook contains within it a dare for whoever picks it up, a scavenger hunt through the store that culminates in reciting Joni Mitchell’s “River” from a small stage to a mostly empty room.

Can you guess who finds the notebook??

Dash and Lily trade the notebook back and forth by leaving it all around New York, using a network of friends, relatives, and badly treated retail workers. They challenge each other to dare after dare, slowly starting to fall in love, even though they’ve never actually met. It’s that perpetual romantic fantasy of someone getting to know the real you without judging you based on your appearance, and by the time Dash and Lily finally met (without knowing they were meeting, of course!), I was highly invested in them maybe holding hands and kissing a little bit.

Like so many holiday rom-coms, Dash & Lily isn’t perfect. It doesn’t always know what to do with some of its supporting characters, who are too often just literal messengers for Dash and Lily’s antics. It also falls back on a lot of “poor little rich boy” tropes for Dash without really trying to interrogate or reinvent them in any way. (And given the ways in which Dash and Lily both treat retail workers like they know said retail workers are minor characters in their lives, the class politics of this show are honestly a little disturbing.) If you have a low tolerance for tweeness, the first episode might set your teeth on edge. The show levels out after that — though if you have a low tolerance for tweeness, Dash & Lily isn’t really for you.

But if you put all of that aside, Dash & Lily just works. Abrams gives good smolder, and Francis is terrific, delivering a breakout performance in a role that could be intensely annoying but that she makes wounded and winning. They make sure that Dash and Lily are as interesting individually as they are when they’re Dash & Lily. And the supporting cast is equally well chosen — they might be playing broad types, but they bring just a touch of individual flair to those broad types. (I’m especially fond of Dante Brown as Dash’s friend, Boomer, whose job at Two Boots Pizzeria ends up being key to Dash and Lily’s schemes.)

Plus, there’s just something about Christmastime in New York that’s effortlessly magical. Few cities are as well-suited to becoming a fairytale of lights and unlikely connections as New York, and Dash & Lily head director Brad Silberling is the perfect choice to give the series an extra sparkle.

Dash & Lily’s greatest strength is making you believe not just that its story is happening, but that it could only happen in this city, at this time of year. Maybe buying into it is only possible at this time of year, but, well, Christmas is coming. Dash and Lily await.

Dash & Lily is streaming on Netflix. Season one consists of eight 25-minute episodes. Season two has been ordered.

How Kamala Harris’s mental health plan could hurt the most vulnerable
After a wild 8 years, Facebook’s former VP of communications is switching to venture capital investm...
Joe Biden makes the case Donald Trump has already made America more dangerous
The frustrating, enduring debate over video games, violence, and guns
Bernie Sanders got more young voters in New Hampshire than everyone else combined
The Trump administration is about to delete an important medical resource