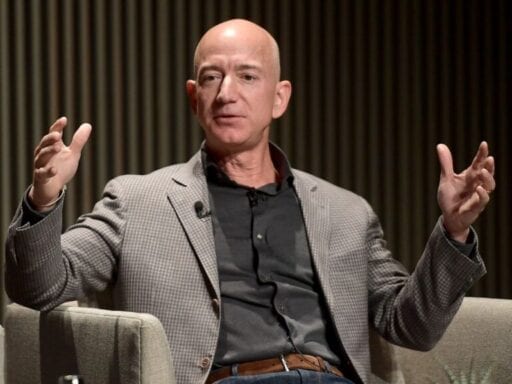 Davis, a computer programmer who was Jeff Bezos’ second hire in 1994 before the shopping site even launched, told Recode on Friday that the company should be forced to separate the Amazon Marketplace, which allows outside merchants to sell goods to Amazon customers, from the company’s core retail business that stocks and sells products itself.

His reasoning? He’s troubled by reports of Amazon squeezing and exploiting the merchants who stock its digital shelves in ways that benefit Amazon, the company, above all else. Davis’ concerns come as Bezos’ company has come under increased scrutiny from politicians, regulators, and its own sellers, in part over the power it wields over small merchants who depend on the tech giant for their livelihoods.

“There’s clearly a public good to have something that functions like the Amazon Marketplace. … If this didn’t exist, you’d want it to be built,” Davis said. “What’s not valuable, and what’s not good, is that the company that operates the marketplace is also a retailer. They have complete access to every single piece of data and can use that to shape their own retail marketplace.”

Davis is referring to how Amazon uses data from its third-party sellers to benefit its core retail business, whether it be by scouring these merchants’ best-sellers and then choosing to sell those brands itself, or to create its own branded products through similar means.

“They’re not breaking any agreements,” he added. “They’re just violating what most people would assume was how this is going to work: ‘I sell stuff though your system [and] you’re not going to steal our sales.’”

Davis’ comments appear to be one of the first times that an early Amazon employee has called for the company to be broken up. Earlier this year, US presidential candidate Elizabeth Warren argued for the same. And both the US House of Representatives and the Federal Trade Commission are scrutinizing Amazon’s business practices to determine if they are anticompetitive, including its dealings with the hundreds of thousands of merchants who are the backbone of Amazon’s unmatched product catalogue.

An Amazon spokesperson sent Recode a statement, which read in part: “Sellers are responsible for nearly 60% of sales in our stores. They are incredibly important to us and our customers, and we’ve invested over $15 billion dollars this year alone—from infrastructure to tools, services, and features—to help them succeed. Amazon only succeeds when sellers succeed and claims to the contrary are wrong. Sellers have full control of their business and make the decisions that are best for them, including the products they choose to sell, pricing, and how they choose to fulfill orders.”

Davis’ comments to Recode came after he posted an online comment alongside a New York Times article earlier this week about the challenges sellers face while doing business on Amazon.

“For nearly 2 decades Amazon has used its control of its marketplace to strengthen its own hand as a retailer,” Davis wrote. “This should not be allowed to continue.”

The Times article highlighted various ways that Amazon allegedly puts pressure on the merchants who are responsible for nearly 60 percent of all Amazon physical product sales, including burying their listings if they are selling the same product for less elsewhere and making it hard for brands that don’t advertise on the site from showing up at the top of search results. (Recode spotlighted similar complaints from sellers in an episode of the Land of the Giants podcast series this summer.)

Davis wrote the backend software for the first iterations of the Amazon.com website from 1994 into 1996. He left the company after a year and a half and following the birth of his first child, in part, he said, because of the culture Bezos was creating that churned through good employees, whom Davis says were worked “into the ground.”

Still today, Davis marvels at what Bezos and his leadership team have built over the past two decades, and he says he shops on Amazon regularly.

“We exist with multiple hats: We’re citizens, [we’re] employees, we’re parents, we’re consumers — and, from my perspective, if you put the consumer hat on, it’s easy to feel incredibly proud of what Amazon is and has become,” Davis said. “But the problem is that that’s not the only hat that we wear — and its fine to celebrate and be optimistic and positive about what the company represents for consumers — but you also have to ask seriously, what does the company represent [to us] as citizens, as employees. And unfortunately, you have to be incredibly naive not to see that the answers to those questions are nowhere near as positive.”

“It is an amazing story,” he added, referring to the company’s innovation and success, “but as time goes forward my gut feeling is that it will not only not be the whole story, but really the smallest part of the story.” In addition to finding issue with Amazon operating simultaneously as retailer and marketplace, Davis also wonders why such a powerful — and, now, profitable — company can’t pay the frontline workers in its warehouses and delivery network better.

Today, Davis lives in a small New Mexico town and writes open source software for recording and editing audio. He said he knows it’s “absurd” to feel any sort of responsibility for the power that Amazon holds today.

“I doubt there’s a single line of code or concept that dates back to when I was there.”

He also stressed that most of the company’s early success should be attributed to Bezos’ intellect, ambition, and drive.

But at times, doubts do creep in for Davis. They emerge when he allows himself to consider what might have been if he, and Amazon’s first employee — fellow programmer and Amazon’s first Chief Technology Officer Shel Kaphan — hadn’t been the type of technical talents that understood the internet in its earliest days.

“Emotionally,” Davis said, “I do feel some kind of culpability.”

Ring is finally requiring a basic security feature to help prevent hacks
Another armed man has been arrested at a DC security checkpoint
What Mike Pence’s public health record says about his ability to lead on coronavirus
Installing air filters in classrooms has surprisingly large educational benefits
Trump promotes Putin’s take on a “far-fetched” impeachment process
American Factory, the first film in the Obamas’ Netflix slate, is one of the year’s best docs