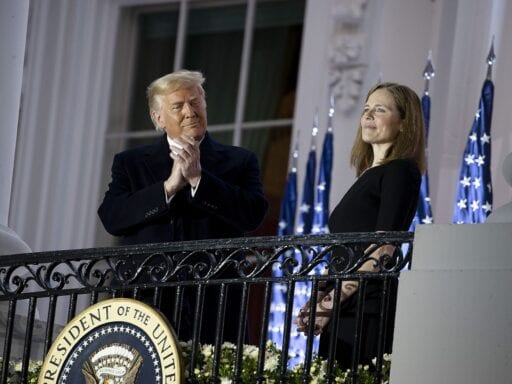 The Supreme Court’s new culture warrior will leap straight into the culture war.

Just one day after the election, the Supreme Court will hear oral arguments in a case that could hand religious conservatives total victory in a longstanding battle over whether the Constitution protects the right to discriminate against LGBTQ people on religious grounds.

Fulton v. City of Philadelphia was likely to end in victory for the religious right even before Justice Amy Coney Barrett’s confirmation gave conservatives a 6-3 majority on the Supreme Court. With Barrett now on the Court, Fulton is overwhelmingly likely to end in a major defeat for LGBTQ equality.

And the case also has implications that stretch far beyond anti-discrimination law. The Fulton plaintiffs attack two well-established constitutional doctrines. The first provides that laws that apply equally to religious and secular parties, without singling out people of faith for inferior treatment, are generally constitutional. The second provides that the government has wide-ranging authority to regulate its own contractors, and may place demands on such contractors that it might not be able to place on private businesses.

Both of these doctrines could fall now that a 6-3 conservative Court has taken up Fulton.

One of the plaintiffs in Fulton is Catholic Social Services (CSS). Until recently, CSS was one of 30 different organizations that contracted with the city of Philadelphia to identify potential foster parents and to help the city place foster children in suitable homes. In 2018, however, a reporter from the Philadelphia Inquirer discovered that CSS discriminates against same-sex couples, in violation of its contract with the city forbidding discrimination on the basis of sexual orientation.

After an investigation, the city determined that CSS was, indeed, engaged in discrimination, and it did not renew its foster placement contract with CSS. (The city says in its brief that it wishes to renew its contract with CSS, which has otherwise “performed its contractual duties with distinction,” but will only do so if CSS agrees to be bound by the non-discrimination requirement.)

CSS’s primary argument is that the Constitution’s safeguards protecting “free exercise” of religion entitles it to continue to contract with the city, even if it refuses to comply with one of the terms of that contract because it objects to that term on religious grounds.

For this reason, Fulton is a significant escalation in the legal war over whether and when people of faith may violate laws that they object to for religious reasons.

Other recent cases seeking religious exemptions from the law, such as Masterpiece Cakeshop v. Colorado Civil Rights Commission (2018), involved private businesses that claimed a right to defy certain laws regulating their business. Fulton, by contrast, involves an organization that contracts with the government to provide governmental services to the public.

Cases like Masterpiece Cakeshop, in other words, ask whether the government can regulate how private business owners conduct their own affairs. Fulton asks whether a private religious organization can dictate how the government conducts its business.

In the past, the Supreme Court treated this distinction as significant. “There is a crucial difference, with respect to constitutional analysis,” the Court explained in Engquist v. Oregon Dept. of Agriculture (2008), “between the government exercising ‘the power to regulate or license, as lawmaker,’ and the government acting ‘as proprietor, to manage [its] internal operation.’”

But it’s far from clear that the current Court will consider the distinction between purely private actors and government contractors to be dispositive — or even relevant.

The rights of religious objectors have ebbed and flowed at various points since Sherbert v. Verner (1963), a seminal decision holding that the Constitution limits the government’s ability to enforce laws that impose a “substantial infringement” on someone’s religious beliefs. Understanding how the Court’s approach to religious liberty has changed over time is important to understanding the Fulton case — and to understanding why the Fulton plaintiffs’ position is a radical break with nearly all of the Court’s previous precedents interpreting the Constitution’s free exercise protections.

A big reason why the Supreme Court’s religious liberty cases can be confusing is that the Court made an unfortunate choice of words in Sherbert. Sherbert held that the government typically cannot enforce a particular law against someone who objects to that law on religious grounds unless the government’s reasons for doing so are supported by a compelling state interest.

These three words, compelling state interest, will leap out to any law student who has completed their first semester of constitutional law. When the Court uses the words “compelling interest,” it typically signals that the Constitution applies the highest possible safeguards against a particular kind of government action. Laws that discriminate on the basis of race, for example, must overcome a “compelling interest” test.

Most laws that are subjected to such a test — lawyers refer to this rigorous level of constitutional analysis as “strict scrutiny” — are struck down.

Yet, while the Court used three loaded words in Sherbert, the judiciary applied something much less rigorous than strict scrutiny in cases involving religious objectors. A 1992 study by James E. Ryan, now the president of the University of Virginia, found that federal courts of appeals heard 97 free exercise cases applying the “compelling interest” test between 1980 and 1990, and those courts rejected 85 of these cases.

Indeed, while Sherbert technically remained good law for much of this time, the Supreme Court’s decisions often emphasized that courts should be reluctant to grant exemptions to business regulations or other laws that applied evenly to secular business and to people of faith. As the Court held in United States v. Lee (1982), “when followers of a particular sect enter into commercial activity as a matter of choice, the limits they accept on their own conduct as a matter of conscience and faith are not to be superimposed on the statutory schemes which are binding on others in that activity.”

Eight years after Lee, the Court seemed to abandon Sherbert altogether — and it did so in a majority opinion written by one of the conservative movement’s heroes. “To make an individual’s obligation to obey such a law contingent upon the law’s coincidence with his religious beliefs, except where the State’s interest is ‘compelling,’” Justice Antonin Scalia wrote for the Court in Employment Division v. Smith (1990), is “permitting him, by virtue of his beliefs, ‘to become a law unto himself.’” Such an outcome, according to Scalia, “contradicts both constitutional tradition and common sense.”

Religious objectors must follow “neutral law[s] of general applicability,” Scalia wrote in Smith. So long as a law applied equally to religious and secular actors, religious objectors had to follow it. Smith announced a new rule — a rule that the Fulton plaintiffs explicitly ask the Supreme Court to abandon now.

Smith triggered an immediate backlash from people across the political spectrum who believed that it did too much to limit religious liberties. Congress enacted the Religious Freedom Restoration Act of 1993 (RFRA) by an overwhelming margin, which sought to “restore the compelling interest test as set forth in Sherbert” and one other related case.

Significantly, RFRA only applies to the federal government. States may still enforce their own laws against religious objectors so long as the state obeys the neutrality rules laid out in Smith.

One more legal development is worth noting here. As Ryan’s and Winkler’s research demonstrates, “the compelling interest test as set forth in Sherbert” is far less strict than the rigid strict scrutiny test that the Court applies to laws that discriminate on the basis of race. Nevertheless, in Burwell v. Hobby Lobby (2014), the Supreme Court reinterpreted RFRA to apply full-bore strict scrutiny when a religious objector claims an exemption to a federal law.

And that brings us back to Fulton. The Fulton plaintiffs offer several reasons why they think that Smith should not apply to their particular case, but they also make a big ask: The Court should “revisit Smith and apply strict scrutiny to government actions infringing on religious exercise.”

The plaintiffs in Fulton, in other words, seek broad, unprecedented legal immunity from federal and state law. And they claim that this immunity is written into the Constitution itself.

Not that long ago, the Supreme Court indicated that cases like Fulton were frivolous

The idea that religious objectors should be free to violate anti-discrimination laws is not new. But the Supreme Court used to treat this idea very dismissively.

Maurice Bessinger owned a South Carolina chain of restaurants known as Piggie Park that sold barbecue served with the mustard-based sauce peculiar to that state. He was also a virulent racist, who distributed literature to his customers claiming that African slaves “blessed the Lord for allowing them to be enslaved and sent to America.” When Congress banned whites-only restaurants in 1964, Bessinger claimed that this ban “contravenes the will of God,” and that the Piggie Park restaurants should be allowed to ignore this new law.

But the Supreme Court rejected Bessinger’s religious liberty argument in the most dismissive way possible. In its unanimous decision in Newman v. Piggie Park Enterprises (1968), the Court concluded that “this is not even a borderline case,” and that Bessinger’s claim that his religion empowers him to discriminate is “patently frivolous.”

At least some members of the Court’s right flank appear to concede that religious objectors cannot engage in at least some forms of race discrimination. As Justice Samuel Alito wrote in Hobby Lobby, “the Government has a compelling interest in providing an equal opportunity to participate in the workforce without regard to race, and prohibitions on racial discrimination are precisely tailored to achieve that critical goal.”

Unless Congress adds new seats to the Supreme Court, the Court’s new majority is likely to give religious conservatives unprecedented new rights — and to do so at the expense of many victims of discrimination.

Vox Sentences: California vs. carmakers
Kavanaugh bragged about his clerks’ diversity. His legal record is another story.
President-elect Joe Biden’s transition team is one of the most diverse ever
Processed foods are a much bigger health problem than we thought
Demand grows for Kentucky AG to release the grand jury report in the Breonna Taylor case
Spend August reading the exquisite dark fairy tale The Vanishing Half with the Vox Book Club