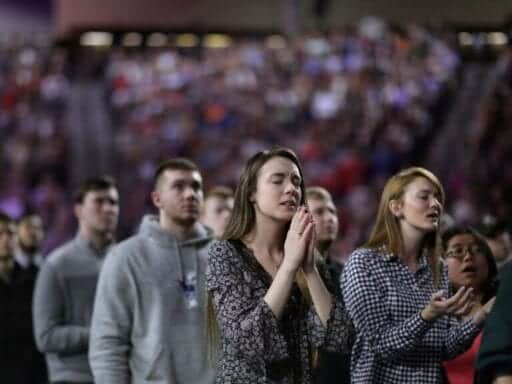 Why are white evangelicals so devoted to President Trump?

It’s a question that has preoccupied many academics and political observers — and a Christmas Day exchange between Pete Buttigieg and a Christian right blogger shed some light on one answer.

Buttigieg, the mayor of South Bend, Indiana, and a contender for the Democratic presidential nomination, tweeted that Jesus Christ “came into this world … not as a citizen, but as a refugee.” In response to that Christmas message, religious right blogger Matt Walsh tweeted that “Joseph and Mary went to their ancestral home in Bethlehem for a census. In no sense did Jesus ‘come into this world as a refugee.’”

That pushback caught the attention of Eastern Illinois University political scientist Ryan P. Burge. The question of Jesus’s immigration status is still a subject of debate among Christians. But Walsh’s forceful response did underscore something for Burge that he wanted to dive deeper into: the fact that “white evangelicals (like Matt Walsh) are incredibly conservative on immigration.”

In a post probing the issue on the site Religion in Public, Burge used data from a 2018 Cooperative Congressional Election Study, which asked about 60,000 participants a host of questions on a range of issues.

On immigration, respondents were asked five different questions: whether they supported withholding federal funds from sanctuary states and cities; increasing border funding by $25 billion; detaining those who cross the border without authorization multiple times; ending a visa lottery program and family-based immigration, both of which have been the subject of President Donald Trump’s ire; and rolling back the Deferred Action for Childhood Arrivals program, which has offered deportation protection and work permits to over 700,000 young unauthorized immigrants since 2012.

Burge’s analysis, published Thursday, finds that on issues ranging from border security to immigration detention, white evangelicals — a group that includes dozens of individual denominations, from the Southern Baptist Convention to the Pentecostal movement — are substantially more conservative than the average American and even the next most conservative religious group.

Evangelicals were consistently the most conservative by a wide margin.

It suggests that evangelical support for Trump continues to remain high largely because they like the policy outcomes of the Trump era — particularly on immigration.

Burge’s findings are in line with prior polling on evangelicals’ positions on immigration issues. An October PRRI survey of more than 2,000 voters found that Republican white evangelical Protestants were 75 percent more likely than all Republicans to assert that “immigrants are invading American society.”

A Washington Post/ABC poll from January 2018 determined that three-quarters of white evangelicals nationwide favored the Trump administration’s “crackdown on undocumented immigrants” compared to 46 percent of all Americans. And a Pew Research Center poll in May 2018 found that 68 percent of white evangelicals think America is not obligated to resettle refugees — 25 percent more than the national average.

Evangelicals’ attitudes toward immigrants don’t seem to have much basis in religious scripture, as Tara Isabella Burton wrote for Vox:

The Bible contains numerous passages that seem to straightforwardly exhort care for the poor, immigrants, and refugees. Isaiah 10, for example, sees God excoriating those who “turn aside the needy from justice and to rob the poor of my people of their right.” In Matthew 25 (which a Methodist pastor quoted to Jeff Sessions Monday while protesting his speech), Jesus warns his followers that those who withhold care from the poor or the refugee — “the least of these” — are seen as having done it to Jesus himself. Plenty of other verses — Leviticus 19:33–34, Jeremiah 7:5–7, Ezekiel 47:22, Zechariah 7:9–10 — express similar sentiments.

But since at least the 1970s, American evangelicals have generally been reluctant to count immigrants among those the Bible calls on them to aid. Trump has further fueled that reluctance, Burton adds:

[T]he age of Trump — and the Christian nationalism he has frequently evoked as a rhetorical campaign strategy — has seen white evangelical nativist rhetoric take on a more politicized role. As Messiah College professor and historian John Fea told Vox, white evangelical pastors — and thus their parishioners — are increasingly willing to take their sermon talking points and “marching orders” from an administration buoyed, in part, by its embrace of nativism.

Some evangelicals have pushed back against the hardline turn immigration policy has taken under Trump. Most recently, Christianity Today, a prominent evangelical magazine, criticized Trump’s “cruelty and hostility towards immigrants and refugees” (though as my colleague Jane Coaston notes, the magazine isn’t representative of the type of evangelicals who back Trump).

Evangelical leaders, including Rev. Franklin Graham, the son of the prominent evangelist Rev. Billy Graham, also widely denounced the Trump administration’s policy of separating immigrant families in detention in the summer of 2018 (though in that instance Graham also noted his continuing enthusiasm for Trump).

But on the whole, the president’s views on immigration have drawn support from evangelicals, a key voting bloc that helped carry him to victory in battleground states in 2016. It’s a strategy that his campaign is hoping to replicate in 2020 and, so far, it appears to be working: Trump has a 75 percent approval rating among white evangelicals, compared to 42 percent among all Americans.

Democrats’ impeachment agita, explained
Are vaccine providers selling your health data? There’s not much stopping them.
Calling the cops on someone with mental illness can go terribly wrong. Here’s a better idea.
Coronavirus treatment research is being held up by Trump’s ban on the use of fetal tissue
America has never grappled with its racist past. Could Germany be a model?
6 winners and 5 losers from a Succession where the unthinkable happens