One way or another, the Supreme Court is likely to let Trump end DACA 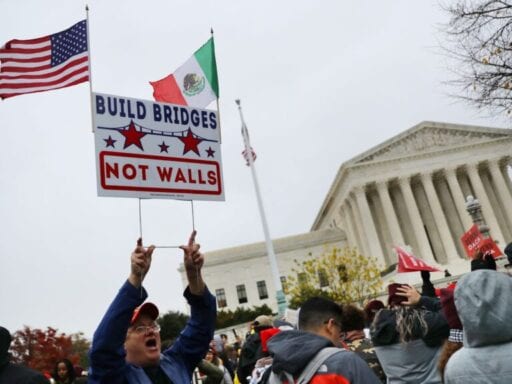 Share
Loading...
Hundreds of people gather outside the Supreme Court to rally in support of the Deferred Action on Childhood Arrivals program as the court hears arguments about DACA on November 12, 2019 in Washington, DC. | Chip Somodevilla/Getty Images

The DACA arguments went better than expected for Dreamers, but that’s probably not enough to save them.

On the eve of Supreme Court arguments on the Deferred Action for Childhood Arrivals (DACA) program — an Obama-era program that allows unauthorized immigrants brought to the US as children to live and work in the United States — the future of DACA looked grim. The Court’s decision to hear this case — when several lower courts agree that the Trump administration acted improperly when it announced it was winding down DACA — was itself seen as a sign that the Republican majority was likely to reverse those lower courts.

After oral arguments, the fate of DACA and the approximately 670,000 immigrants who depend on DACA still appears grim — though there’s a slim possibility the Court could extend the program’s life a little longer.

Much of the argument, in fact, turned on a question of whether to require the Trump administration to file additional paperwork before it can wind down DACA. Based on the oral arguments, it may be possible to find at least five votes to keep DACA in place while the administration provides a fuller justification for its decision to end the program. Such a decision could buy DREAMers some time, but in the end it still won’t save DACA.

The three DACA cases, which were consolidated into a single argument, are Trump v. NAACP, McAleenan v. Vidal, and Department of Homeland Security v. Regents of the University of California.

During the argument, several justices repeated two pivotal words: “reliance interest.” Broadly speaking, when the government wants to end a policy that many people have relied upon, it must provide an explanation of why this policy shift is justified despite the fact that those people have come to depend upon it.

All four of the liberal justices, at various times, worried that the administration did not meet this burden when it explained its decision to end DACA. Meanwhile, Justice Samuel Alito appeared to be the only member of the Court’s conservative bloc who seemed unconcerned about the reliance interest problem — although Chief Justice Roberts signaled in several of his questions that he is bothered by the broad range of discretion over immigration policy that the Obama administration claimed when it began the DACA program.

That leaves Justices Neil Gorsuch and Brett Kavanaugh, who simultaneously appeared sympathetic to the administration’s arguments, but also concerned that the administration did not adequately address the reliance problem. Gorsuch, in particular, seemed concerned that, because winding down DACA would impact a large class of individuals, the administration may need to provide a fuller explanation for its actions. (Justice Clarence Thomas hewed to this typical practice of not asking any questions.)

Regardless of how the Supreme Court rules, the reality for DACA recipients remains bleak. There are few doubts that the Trump administration could end DACA if it wants to — it just needs to jump through the necessary procedural hoops first. If the Trump administration loses this case, it could still end DACA the very next day by releasing a memo that adequately explains its decision to do so.

The Court’s decision is essentially the difference between an immediate end to the program and a more prolonged wind-down (though, in theory, if the administration waits too long to adequately explain its decision to end DACA, it could lose its shot if a Democrat prevails in 2020).

The DACA cases turn on a tiny legal question

While the human stakes in these cases are enormous, the legal question is so minor that it is unclear why the Court agreed to hear the cases in the first place.

As a general rule, the executive branch must provide a reasoned explanation when it announces a new policy. Three lower courts held that the Trump administration failed to adequately explain its decision to end DACA, and blocked the decision on those grounds.

The administration’s explanation for why it ended DACA largely hinges upon a claim that DACA is illegal, although a 2018 memo from former Homeland Security Secretary Kirstjen Nielsen does contain a few sentences that, at least arguably, state a policy objection to DACA. One line, for example, states that it is “critically important for DHS to project a message that leaves no doubt regarding the clear, consistent, and transparent enforcement of the immigration laws against all classes and categories of aliens.”

The lower courts, however, agreed that the administration has provided only a legal explanation for its decision to end DACA — and that this explanation was inadequate.

In any event, many of the justices zeroed in on a different potential problem with the administration’s decision to end DACA. As Justice Scalia wrote for the Court in FCC v. Fox Television Stations (2009), sometimes the executive branch wishes to end a policy that “engendered serious reliance interests that must be taken into account.” In these cases, “it would be arbitrary or capricious” for the administration “to ignore such matters” when it explains why it’s shifting to a new policy.

Though Nielsen’s 2018 memo does discuss the fact that many people have come to rely on DACA, it does so very briefly. It also does little more than state her conclusion that the administration’s belief that DACA is illegal trumps concerns about reliance.

“I am keenly aware that DACA recipients have availed themselves of the policy in continuing their presence in this country and pursuing their lives,” Nielsen wrote. “Nevertheless, in considering DHS enforcement policy, I do not believe that the asserted reliance interests outweigh the questionable legality of the DACA policy and the other reasons for ending the policy discussed” elsewhere in her memo.

There’s little doubt that all four of the Court’s liberals find this explanation inadequate. At one point, Justice Stephen Breyer rattled off a long list of groups — health care organizations, unions, businesses, cities, military organizations — that all filed briefs describing how they have come to rely on DACA and on DACA beneficiaries. None of these granular concerns are discussed in the Nielsen memo.

Meanwhile, Roberts, Gorsuch, and Kavanaugh all asked about the reliance problem. Gorsuch honed in on this problem early in the argument, asking Solicitor General Noel Francisco whether the administration needs to say more about reliance interests given the huge stakes in this case and the tremendous number of people impacted by the decision to wind down DACA.

Likewise, Kavanaugh acknowledged that Nielsen discussed the reliance question only “briefly” in her memo, though he also seemed unsure about what more Nielsen should have done.

After more than an hour of arguments, Gorsuch appeared to be the most likely member of the Court’s conservative bloc to cross over and vote with the liberals. But Gorsuch gave many signs that he is still likely to vote with Trump. He noted, for example, that courts would not be allowed to review a prosecutor’s decision not to prosecute marijuana offenders — or to lift that policy.

Why, he wondered, is the Trump administration’s decision to end DACA — and effectively subject DACA beneficiaries to immigration enforcement — any different than a prosecutor’s decision to be less lenient to drug offenders?

Likewise, Gorsuch also asked why it would really matter if the Supreme Court left DACA in place until the administration provides a longer answer to the reliance problem. Whether that explanation is one paragraph or 15 pages, doesn’t this all end the same way for DACA beneficiaries?

The polite answer to Gorsuch’s question came from Ted Olson, one of the two attorneys arguing in defense of DACA. At the very least, Olson said, the Trump administration should have to “take responsibility” for its decision to cast hundreds of thousands of immigrants back into the shadows. It cannot hide behind a highly contested claim that DACA is illegal.

If the Trump administration wants to target DREAMers, it should have to own its decision to do so.

The more direct answer came from Justice Sonia Sotomayor. The administration has not provided a political explanation for its choice to “destroy lives.” If it is going to cast DREAMers into the abyss, it at least owes them an explanation.

It is possible that a majority of the Supreme Court will agree with her. That decision will still leave DACA beneficiaries in a precarious position. But it will at least buy them some time.

Why Airbnb is suddenly struggling to make money
An enormous ice cube at the South Pole is revealing mysteries about the universe
Facebook’s independent Oversight Board is finally up and running
Bob Woodward withheld his Trump revelations for months. Was that wrong?
What was fun?
Poll: Bernie Sanders does well with Latinos — but not in Florida