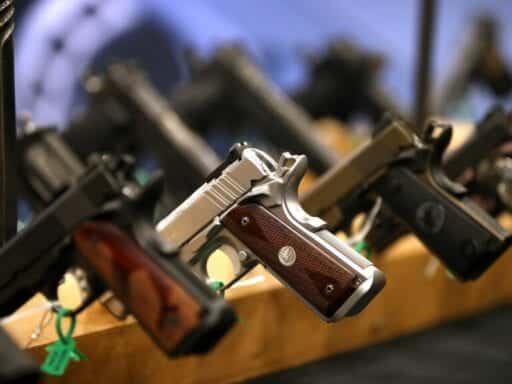 According to a new study, replacing medium- and large-caliber guns with small-caliber weapons could cut gun deaths by almost 40 percent.

The bigger the gun, the deadlier it is. Or, rather, the bullet.

The Washington Post’s Christopher Ingraham on Friday highlighted a study published in the journal JAMA Network Open that found larger-caliber firearms are much likelier to kill a shooting victim than smaller-caliber ones. Caliber measures the internal diameter of the barrel of the gun, or how wide the bullet is.

Analyzing data on hundreds of shootings in Boston between 2010 and 2014, researchers Anthony Braga of Northeastern University and Philip Cook of Duke University discovered that on a bullet-by-bullet basis, shootings with larger-caliber guns were deadlier than smaller-caliber handguns, but they’re not more accurate. Shootings with a medium-caliber weapon were 2.3 times likelier to result in death than with a small-caliber gun; large-caliber guns increased the odds of death by 4.5 times compared to small-caliber guns.

The implication, Braga and Cook wrote, is that replacing medium- and large-caliber guns with small-caliber guns would have resulted in a 39.5 percent reduction in gun deaths.

Actually, guns do kill people, according to a new study https://t.co/CUjjPGUbNR pic.twitter.com/hhlqmHQIna

The researchers examined incident reports from 221 homicides and 1012 nonfatal gun assaults where gunshot wounds were sustained.

This view is widespread among experts who take a permissive attitude toward gun regulation. A Rand Corp. study published earlier this year, for instance, surveyed a group of gun experts who generally favored fewer gun restrictions, asking what would happen if a given gun policy was successful at reducing gun homicides. On average, those experts believed that about 90 percent of the prevented gun homicides would simply end up as homicides by other means. That reflects a belief that homicidal intent is the key factor driving the lethality of gun violence.

But the JAMA study challenges that notion. Some guns are simply manufactured to be more lethal than others. It suggests that identical shooters with identical intent would kill fewer people if they had access only to less powerful firearms.

“Whether a victim of a serious assault lives or dies is to a large extent a matter of chance, rather than a question of the assailant’s intent,” Braga and Cook write. “The probability of death is connected to the intrinsic power and lethality of the weapon. That suggests that effective regulation of firearms could reduce the homicide rate.”

In other words, having fewer big guns on the streets could make gun violence in America less deadly.

America has a gun problem. There’s a lot of evidence gun control might help.

There are multiple levels to the debate surrounding America’s unique gun violence problem and what will and will not solve it. As Vox’s German Lopez writes, guns are a factor, but they’re not the only one — there’s also poverty, urbanization, and alcohol consumption. Still, they play a big role.

Researchers have found time and time again that more guns mean more deaths. And Americans have a lot of guns, and easy access to them. Americans own almost half of the 650 million civilian-owned guns there are in the entire world, and gun homicide rates in the US are 25 times higher than in other high-income countries. States and developed countries with more guns have more gun deaths.

This latest paper on the caliber of the gun adds a different layer to the gun debate, and it makes a compelling argument for why the type of gun used in a shooting can make a difference between life and death.

Why summer likely won’t save us from the coronavirus
Colonial Pipeline finally admits it paid hackers millions in ransom
Books to read when you’re feeling low-energy
Claudia Conway’s TikToks about her mother’s alleged abuse are more complicated than they seem
The House has renewed the Violence Against Women Act. It now faces major hurdles in the Senate.
The bogus Steve Bannon-backed study claiming China created the coronavirus, explained