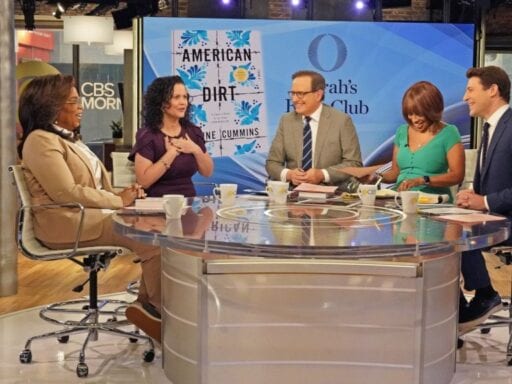 Oprah has faced backlash for lauding this novel about immigration and the US-Mexico border, written by a non-Mexican author. Now she wants to have a conversation.

Less than a week after announcing that the highly controversial Mexican migrant novel American Dirt was the newest entry for her book club, Oprah is taking another look at her choice.

In a video posted to Instagram on Sunday, Oprah declares that after an “outpouring of, may I say, very passionate opinions,” it’s become clear that American Dirt will require a “deeper, more substantive discussion” than she originally planned for. Now, rather than hold a standard discussion about the book, she plans to host a conversation with people “from all sides” of the issue to have an in-depth discussion about cultural appropriation and the question of “who gets to publish what stories.”

Oprah makes a point of noting that when she first read American Dirt as a galley last summer, it “gutted” her. But as criticism began to pour in about the novel, starting in December and increasing in volume over the past two weeks, she struggled to understand what about it was so offensive to so many people. That reaction mirrors in miniature the response of the publishing industry at large to American Dirt.

American Dirt, which is about a Mexican mother and son fleeing to the US to escape from violence, was a hugely buzzed-about book well before it published. It sold at auction for a seven-figure advance, earned plaudits from luminaries like Stephen King, John Grisham, and Sandra Cisneros, and received glowing early trade reviews.

Now, American Dirt has gone from being the presumed biggest novel of the season to a lightning rod for controversy — and Oprah has found herself in the middle of the conversation.

It’s clear that we need to have a different kind of conversation about American Dirt and we welcome everyone’s thoughts and opinions in our community. #ReadWithUs

And as Oprah makes her plans for the Apple TV+ version of her vaunted book club, Latinx literary activists are continuing the debate, in what Brandon Loran Maxwell describes at the Daily Chela as the “birth of the new Chicano movement.” The immigrant youth group United We Dream has created a petition calling on Oprah to feature more Latinx and immigrant authors in her book club. On Twitter, the writers Roberto Lovato, David Bowles, and Myriam Gurba launched the hashtag #DignidadLiteraria, which encourages action both online and in real life.

“Our point was made,” Lovato tweeted, “but it’s time to pivot to something far more important than a single white woman who stole our stories: us, our voices, our power, our beauty, our histories, and our dignidad.”

Amazon is selling its futuristic cashierless technology to other stores
On Buddhism and Blackness
Fewer inspectors, more deaths: The Trump administration rolls back workplace safety inspections
The successful Asian coronavirus-fighting strategy America refuses to embrace
This week in TikTok: So … is it getting banned or what?
I’ve eaten a meal-replacement shake twice a day for two years. Here’s what it was like.