“Our democracy is in crisis”: Hillary Clinton slams Trump and Republicans in new essay 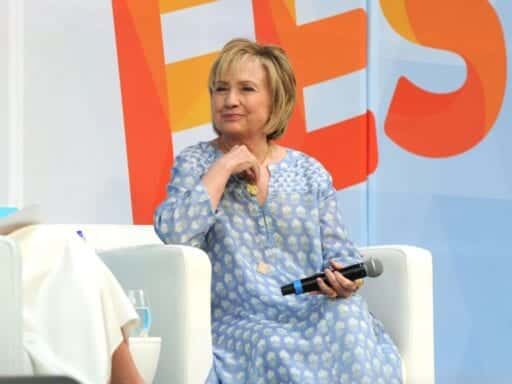 “Hate speech isn’t ‘telling it like it is.’ It’s just hate.”

Hillary Clinton is done playing nice. The former Democratic Party presidential nominee criticized President Donald Trump and the “breathtaking corruption” that has led to, she says, a “crisis” of American democracy in a scathing essay published on Sunday. And she’s not stopping there: She laid the blame directly at the feet of the Republican Party, whose “increasing radicalism and irresponsibility” got the country to where it is and put Trump in the White House.

The essay, published in the Atlantic, was adapted from the soon-to-be-published afterword of Clinton’s 2017 memoir about the 2016 presidential election, What Happened. With the title “American democracy is in crisis,” Clinton lays out the case for alarm and the need to push back nearly two years after Trump was elected.

“Trump and his cronies do so many despicable things that it can be hard to keep track,” Clinton writes. “I think that may be the point — to confound us, so it’s harder to keep our eye on the ball. The ball, of course, is protecting American democracy. As citizens, that’s our most important charge. And right now, our democracy is in crisis.”

The former secretary of state identifies five main fronts where she sees an “assault” on US democracy: attacks on the rule of law, risks in election legitimacy, the president’s war on truth and reason, the administration’s corruption, and Trump’s divisiveness.

“Trump doesn’t even try to pretend he’s a president for all Americans,” Clinton writes.

She lays out a laundry list of examples of where the Trump administration has, in her mind, failed or committed an egregious mistake — family separation at the border, Trump’s denial of the Puerto Rico hurricane deaths, the White House’s nonchalance toward Russian interference campaigns and US voter suppression, the president’s attacks on NFL players for kneeling, his declarations that Haitian and African immigrants are from “shithole” countries and that an American judge with Mexican heritage can’t be trusted.

“None of this is a mark of authenticity or a refreshing break from political correctness,” Clinton writes. “Hate speech isn’t ‘telling it like it is.’ It’s just hate.”

Clinton has slowly been working her way back into the limelight after her surprising loss in the 2016 election. When she first conceded defeat, she encouraged her supporters to give Trump “an open mind and the chance to lead.” But she, like former President Barack Obama, who has also become more vocal in his opposition to Trump, appears to believe it’s no longer time to mince words.

Clinton’s concern isn’t just with Trump — it’s with the broader Republican Party, which has attacked her for years. In the Atlantic essay, Clinton name-checks GOP mega-donors such as the Mercer family and the Koch brothers, who “spent a lot of time and money building an alternative reality where science is denied, lies masquerade as truth, and paranoia flourishes.” She laments hyper-partisanship and division but says it’s not an issue where both sides share equal blame:

But the truth is that this is not a symmetrical problem. We should be clear about this: The increasing radicalism and irresponsibility of the Republican Party, including decades of demeaning government, demonizing Democrats, and debasing norms, is what gave us Donald Trump. Whether it was abusing the filibuster and stealing a Supreme Court seat, gerrymandering congressional districts to disenfranchise African Americans, or muzzling government climate scientists, Republicans were undermining American democracy long before Trump made it to the Oval Office.

Clinton issues a comprehensive call to action, from mobilizing “massive turnout” in the 2018 midterms to doing some “serious housecleaning” when the dust settles. She specifically zeroes in on election reform, including improving election security and ensuring everyone has the right to vote. She also calls for an end to the Electoral College, which she lost in the 2016 election even though she received nearly 3 million more votes than her opponent. “You won’t be surprised to hear that I passionately believe it’s time to abolish the Electoral College,” she writes.

“Democracy may be our birthright as Americans, but it’s not something we can ever take for granted,” Clinton writes in the closing of the essay. “Every generation has to fight for it, has to push us closer to that more perfect union. That time has come again.”

You can read the entire essay on the Atlantic here.

Watch an AI learn to play hide-and-seek
We could put humans on Mars in 5 years — if we’re willing to pay for it
A radio ad invoked lynchings to court black voters. It did not go over well.
Why Trump’s Mar-a-Lago is a magnet for grifters
Why people are being released from jails and prisons during the pandemic
America’s Covid-19 hot spots shed a light on our moral failures