Our pets are anxious. Is CBD the answer? 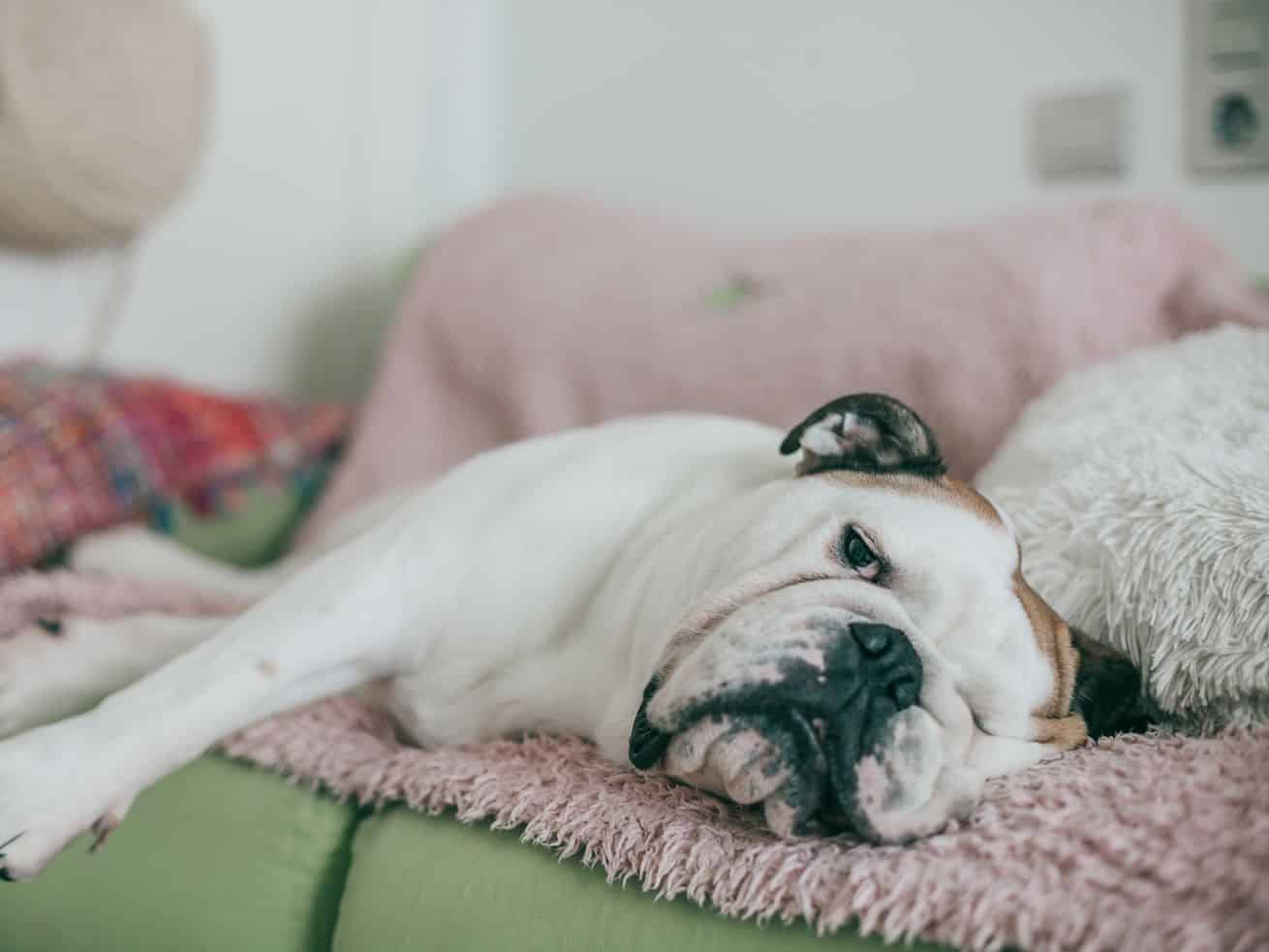 Dogs and cats seem to be relaxing thanks to this compound found in marijuana, but the science so far is inconclusive.

Ramon Ramirez was at the South by Southwest conference, chilling under the black tents of the Fader Fort, when a vendor handed him a small complimentary dose of CBD oil drops for pets. This was 2019, CBD’s breakout year, as the upstart hemp sector swarmed every trade show and music festival in North America. “There were CBD dinner parties and CBD cocktails at dumb brand activations,” remembers Ramirez, who lives in Austin, Texas, and works in the media. A few weeks after the show, Ramirez was on a trip with his dog Penny, who can get anxious on her bad days. He needed to leave her in a room for four hours or more. A few drops of CBD certainly couldn’t hurt.

“Now I get the drops out whenever there’s a thunderstorm,” says Ramirez. “Our dog mellows out and lies down. That’s basically it. But given how nervous she gets during storms, that alone makes a big difference.”

Ramirez is not alone. Recently, it feels like everyone is exploring the potential of hemp for their pets, from edibles to topical creams. Grand View Research estimates that the total revenue derived from CBD pet products could approach $400 million by 2027. That figure is contextualized by The Nielsen Group, which found that three-quarters of CBD consumers are pet owners and that 24 percent of them use hemp for themselves, their animals, or both. (Ramirez tells me that he absolutely has gotten high with Penny. “We ate snacks and hung out,” he says.) The Washington Post notes that a number of high-profile celebrities have started to fold pet care CBD tinctures into their endorsement portfolio. Mike Tyson partnered with Cesar Milan, of The Dog Whisperer fame, for a line of cannabidiol pet treats, and 311, one of the great marijuana bands of all time, added a pet-specific CBD oil last December.

The CBD revolution originated with the passage of the 2018 Farm Bill, which allowed companies to cultivate hemp on a mass scale while leaving further regulation up to individual states. Suddenly, CBD startups were popping up all over the country. For the uninitiated, CBD is one of the compounds found in both hemp and marijuana, but unlike THC — which is the psychoactive component of cannabis — CBD doesn’t get you high. Instead, advocates for the industry say that CBD can reduce chronic pain and assist with depression and anxiety.

American marijuana laws are a confusing, defederalized patchwork, but given that CBD won’t impair anyone’s senses, it’s quickly becoming legal across the country. In fact, the only state that outright bans the possession of CBD products is Idaho. Compare that to cannabis, which can be lawfully used recreationally in only 17 states. The relaxing of those policies has led to a boom in CBD-centered businesses. According to Growth Market Reports, a billion-dollar cannabidiol industry is on the horizon, as a wave of investors attempts to get in on the feeding frenzy. In a world now filled with CBD toothpicks, CBD lube, and CBD-infused workout clothes, CBD dog treats are just another part of the post-prohibition mania.

Jen Weatherhead, the owner of ZenPup, is one of those newly converted entrepreneurs. Four years ago, when she was working in product development for a makeup company, she became the owner of two miniature longhaired dachshunds, Rooster and Roxanne — and Rooster spent his first months in Weatherhead’s care alone in the bathroom. Initially, Weatherhead believed Rooster to be a little eccentric; then she discovered that he had crippling anxiety. Rooster’s veterinarian wanted to put the dachshund on a Xanax prescription, but Weatherhead bristled at the idea of integrating human anti-anxiety medication into the diet of a 2-month-old puppy. Weatherhead was already using CBD in her personal life and reported some “pretty noticeable” changes with her own anxiety and temperament. So, she decided to see if Rooster could find the same relief. Weatherhead researched the CBD pet care space and described what she found as the “Wild West.”

“There was no information around ingredient sourcing, what type of CBD it was, how they extracted it, or where it came from,” says Weatherhead. “All of the best practices we saw on the human side were not being adapted to the pet sector.”

And so, in December 2018, Weatherhead founded ZenPup, which advertises itself as a source for authenticated, ethically sourced CBD for pet owners across America. Every tincture, topical, or treat they sell comes with a Certificate of Analysis from the marijuana lab-testing firm Confident Cannabis, verifying that the product possesses no pesticides, mycotoxins, heavy metals, and perhaps most importantly, an infinitesimally tiny THC makeup.

The ZenPup storefront reflects this highly Instagrammable wellness ethos. The homepage features an image of a white puppy kissing a scruffy millennial man with a beanie pulled just above his ears, the picture of pet and owner health and joy. Their biscuits are made with a blend of honey, peanut butter, and pork, alongside a 5-milligram dose of CBD and a “calming botanical blend” (chamomile, ginger, and valerian root). Pet owners might be concerned about the chicken bones, chocolate, and macadamia nuts that their dog could accidentally scarf down. But Weatherhead believes that CBD isn’t much of a worry for anyone anymore.

“Over the last year or so we’ve seen the stigma of cannabis, both THC and CBD, flip. There’s been a lot of media showcasing all of the healing possibilities of cannabis,” says Weatherhead. “And considering that it’s been in the human sector for a while, it’s given people the education that this is a really good, safe alternative. And there are proof points that it actually works.”

That’s the sticking point. To date, there is still not a medical consensus about the efficacy of CBD for humans and animals alike, including whether the widespread claims about pain relief and blunted depression hold up to scientific truth. It is clear that CBD can be useful in regard to certain medical conditions — last year, the FDA approved a CBD-derived treatment called Epiodelex which reduces seizures among those with rare forms of epilepsy — but that remains the only authorized CBD medication in circulation. Dr. Mark Verdino, chief of veterinary staff at the North Shore Animal League America, tells me there have been CBD studies that reveal a potential impact on arthritis pain and anxiety, but there are others that show no tangible difference between the placebo group and the group that received the medication.

“Basically, all the research says is that there needs to be more true, double-blind-type studies,” he continues. “Even most of those, with animals, are anecdotal. You can’t ask the pet how they’re feeling. We really need more objective studies.”

Still, Verdino tells me that his veterinarian practice has started stocking a CBD product because of how high demand has grown among his clients. Verdino echoes Weatherhead’s earlier point about the sheer number of disreputable actors active in the CBD pet care space, and it’s important to him that if a customer wants to give hemp a try, they’ll at least be taking home something aboveboard.

“Like most nutriceuticals, it’s poorly regulated right now. You could put olive oil in a jar and say it’s CBD,” he says. “So it’s important, as a vet, that while we don’t ‘recommend’ CBD, we can choose a product we have confidence in.”

Verdino doesn’t expect the CBD pet care momentum to slow down. If anything, as legalization continues to sweep the nation, more and more customers will be inquiring about hemp for their house pets. “I think it’ll be easier to prescribe and recommend to clients. I think it all depends on where the research goes,” he says. It remains to be seen if there will ever be a firm pharmaceutical consensus on CBD, but also, who’s to say that will actually matter?

Ramon Ramirez is indifferent to the science because he is not necessarily a CBD believer. That’s not the point. Ramirez recalls how two of his elderly cats passed away in the past year and the way he dosed them up with CBD down the stretch. He believed that it helped with their pain, no matter how true it was.

“Veterinary science is frustratingly limited, and when a pet is sick, you resent not knowing exactly why. You expect Dr. House-level diagnostics and instead get basically a cortisone shot,” Ramirez says. “CBD drops may very well be a snipe hunt. The appeal is more direct control in helping animals.”

Ramirez ruminates on the long, strange journey that marijuana acceptance has taken in the United States. From an unregulated medical tonic to a controlled substance punishable by a mandatory prison sentence to today, in 2021, where cannabis is docile and normalized enough to become a trendy solution for apprehensive dogs. He speaks about Penny’s CBD rations as almost a protest for the “ridiculous, harmful, and anti-intellectual” criminalization of weed, and how often that prohibition disproportionately targeted people of color. It looks like we are finally approaching a turning point, as we enter an era where microdosing our labradors is considering good pet parenting. But I don’t blame Ramirez for looking back on the last century and wondering why it took so long.

SNL takes on dueling Trump and Biden town halls in its cold open
“That’s not the truth, Ellen”: How Dakota Johnson won her birthday feud against Ellen DeGeneres
Nike has made billions selling rebellion to young people
Coronavirus is the first big test for futuristic tech that can prevent pandemics
Why conservatives’ favorite Twitter alternative is about to disappear from the internet
Why Buddhism is true