Paper napkins are expensive and environmentally unsound. Now the industry is trying to save itself. 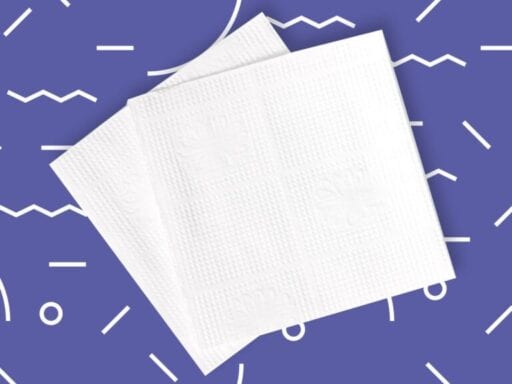 With competition from the paper towel, napkins are fighting to survive.

From a high-rise building in downtown Atlanta, a team of five strategists works around the clock to rescue the paper napkin from extinction. The group, dubbed the “napkin team,” is part of the strategy arm at Georgia-Pacific, a paper manufacturing behemoth that owns a host of napkin, paper towel, toilet paper, and tissue brands. Its mission is to rebuff criticisms of paper napkins as an extra expense or a needless source of environmental waste. And at its center is Lisa Silverboard, who has overseen branding for Georgia-Pacific napkins for eight years.

After holding branding roles at companies like Johnson & Johnson, Silverboard says, “I kind of landed in paper napkins.” But by the time she walked in the door at Georgia-Pacific, the paper napkin was in the throes of a crisis.

Once a mainstay of the American kitchen, paper napkins have rapidly shed market share. Two decades ago, 60 percent of American households regularly purchased paper napkins; today that figure has plummeted to 41 percent, according to Georgia-Pacific statistics.

The plunge has been especially precipitous among young consumers. While 61 percent of people aged 65 and older reported using paper napkins every day, just 37 percent of 25- to 34-year-olds answered the same way, according to a report from market research firm Mintel.

Recapturing that youth market might be the only way to ensure a future for the paper napkin. And under the guidance of its “napkin team,” Georgia-Pacific, which owns napkin brands like Vanity Fair, Mardi Gras, and Dixie, is making its last-ditch pivot toward napkins that appeal to young people. Yet to pull in younger consumers, paper napkin makers are taking on the trappings of a longtime enemy — the paper towel — and recruiting celebrities to restore their luster, all in the hope of sparing themselves from going the way of the plastic straw.

This isn’t the first time paper napkins have faced an existential crisis.

When the first paper napkins reached the US at the end of the 19th century, largely as a result of importing decorative paper napkins from Japan, many Americans objected. Accustomed to reusable napkins, they exclaimed, as one New York City newspaper put it, “Paper napkins! Who ever heard of such nonsense! What good are they?”

But paper napkins soon caught on for another reason: They promised, at least superficially, to balance out class distinctions. When cloth napkins were the only game in town, buying single-use napkins had been a measure of wealth — who but the richest could afford to throw out a cloth napkin after each meal? The availability of cheaply available Japanese paper napkins shifted that paradigm. The same newspaper went on to argue that “the introduction of paper napkins” to the poor “will do away with this social stratum.”

Another turning point for the paper napkin occurred in the middle of the 1900s, when the rise of the hamburger facilitated a new paper napkin boom — much to the chagrin of one Pittsburgh writer, who lamented in 1960, “My chief pet peeve against hamburgers, cheeseburgers, lottaburgers, et al is that they have ushered in the horrible paper napkins.”

The origins of today’s turn away from paper napkins are complex, but some experts believe that environmental concern is at least a nominal factor. Paper napkins, while certainly not the largest contributor to global waste, are joining the ranks of balloons and plastic straws as casualties of the increasing skepticism of single-use paper and plastic products.

“We’re facing major challenges with things like climate change, plastic pollution, and all other kinds of pollution,” says Simon Lockrey, a sustainability researcher at RMIT University in Melbourne. “The napkin debate is just another one of these issues where we’re starting to reconsider reusable versus disposable options.”

In one report that linked the use of non-recycled tissue products — a moniker that includes paper towels, toilet paper, and paper napkins — to deforestation in Canada, lead author Jennifer Skene argued that abandoning paper napkins as well as similar products “could considerably slow forest degradation.”

It is relatively easy for paper napkins to incorporate recycled paper fibers. The more that paper fibers are recycled, the shorter they become — and because many paper napkins only need short paper fibers, a company could craft napkins from fibers that have already seen five to seven reuses, according to Stanford Magazine.

Every napkin in McDonalds, Dunkin’ Donuts, and Starbucks is made entirely from recycled paper

As a result, many restaurants have vowed to use 100 percent recycled paper napkins. Napkins in McDonald’s, Dunkin’ Donuts, and Starbucks stores, for instance, are made entirely from recycled paper. But while some napkin companies have specialty lines that promise high proportions of recycled content, like Seventh Generation’s 100 percent recycled napkins, other major brands including Vanity Fair, Mardi Gras, and Kleenex offer little to no recycled content at all.

Regarding the lack of recycled paper in Georgia-Pacific napkins, Silverboard notes, “Our fiber is sustainably sourced. We’re using certified wood that is replanted, so it’s not like people are clear-cutting areas.”

In fact, the main culprit for the precipitous decline of paper napkins is not environmental fears but an old foe: the paper towel. As a series of doomsday headlines have warned, consumers — especially young people — have made the simple decision to cut down on their number of purchases by substituting paper towels for paper napkins.

That’s in large part because paper towels are so flexible: They clean spills, wrap up vegetables, and dab lips all in one. “A lot of people have found paper towels to be an acceptable substitute for napkins,” says Silverboard. “They like the absorbency that a paper towel offers. You can fold it and put it next to your plate and it works kind of like a napkin, and that versatility is very appealing to a lot of people.”

Meanwhile, brand-name napkins like Vanity Fair and Mardi Gras are losing their cachet. Increasingly, when people do buy paper napkins, they’re opting for the private-label napkins — as opposed to name brands — that they can most cheaply find in stores.

”Consumers don’t care which format they’re using as long as it does the job,” says Jamie Rosenberg, the household products analyst at Mintel. “This value proposition is what Vanity Fair is trying to get back.”

Early in 2018, Georgia-Pacific’s high-end paper napkin brand Vanity Fair rolled out Extra Absorbent, a paper napkin that pitches itself as “part paper towel, part napkin” and that a spokesperson says is designed to have “high appeal among millennials.” The product description for Extra Absorbent notes, “There’s no longer an excuse to use paper towels.”

Rather than compete with the paper towel, the paper napkin has decided to mimic it. And Silverboard notes there’s more on its way: “We have a team that’s working on a whole host of different innovation options.”

To resuscitate the floundering public image of the paper napkin, Georgia-Pacific has attempted to reformulate not just its products but its entire marketing strategy, too.

For one thing, the company recruited a rosé-slinging Amy Sedaris to tape ad campaigns for the new line of Extra Absorbent napkins. On Valentine’s Day 2018, Vanity Fair also partnered with Match.com to launch a marketing campaign, #DateANapkinUser, whose poster features a coiffed white man with a napkin pressed to his lips. The company even commissioned its own study that claimed napkin users are “statistically less likely to have broken up with someone over DM.”

Most recently, after this year’s Oscars, musician John Mayer teamed up with Georgia-Pacific to host his own afterparty for Vanity Fair, the napkin maker — a play on the magazine Vanity Fair’s famed post-Oscars gathering. In the ensuing days, AdAge dubbed Mayer a “napkin influencer.”

To Rosenberg, the merging of paper towels and paper napkins is part of a larger trend in the household paper industry. Tissues, napkins, paper towels, and toilet paper “are losing their differentiation,” he says, and steadily collapsing into one mega-product. Just as paper towels are looking more like napkins, toilet paper is getting softer and more tissue-like.

Still, this war between paper napkins and paper towels cannot help but feel like an exercise in corporate fatalism. Regardless of which product proves to have the greatest consumer staying power, the same small handful of corporate owners are profiting.

Rosenberg notes that the reason these companies pit their napkins against their paper towels is for market research. Georgia-Pacific might own both Brawny’s Tear-A-Square and Vanity Fair’s Extra Absorbent, but seeing which product is more successful tells the company a lot about the market. “I think it’s really a consumer insights exercise,” he says.

It also doesn’t hurt that the financial risks are small. At least in the case of Georgia-Pacific, all of the profits from paper napkins and paper towels alike are in turn fed on to its corporate owner, Koch Industries, which also controls countless household product brands. Even as these individual companies maneuver against each other, the money is all trickling up to the same place.