Parasite’s Best Picture win was a major milestone for the Oscars. Here’s 5 more. 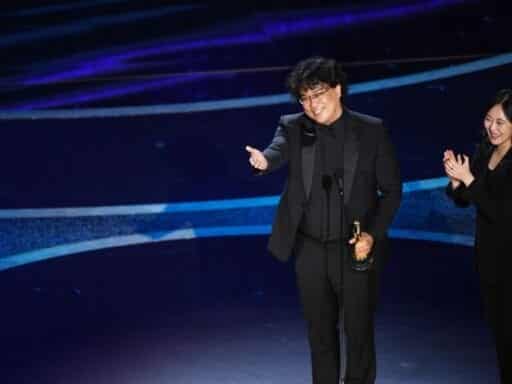 The 2020 Oscars in firsts, milestones, and other statistics.

Every year, there’s a bit of mingled joy and sorrow in counting out the Oscars’ biggest milestones: happiness that we’re finally making progress, but sorrow that it took so long. This year, the Academy achieved one of its biggest milestones ever when it awarded the trophy for Best Picture to Parasite. But there are a few other milestones to celebrate from the awards, too: some joyous, some tragic, and some that are just a little bit quirky. Here are the six biggest milestones from the 2020 Academy Awards.

The Oscars have consistently struggled to recognize films not made in English. Only 10 international feature films have even been nominated for Best Picture, and before Sunday night, none had ever won. This year, some Academy members and critics argued that it was actually unfair for international films to be eligible for Best Picture. “I don’t think foreign films should be nominated with the regular films,” said one of the anonymous Academy members who the Hollywood Reporter interviews every year in its most reliable hate-read of a recurring feature, Brutally Honest Oscar Ballot. “Regular films” in this context presumably means English-language films, which is honestly just more xenophobia than we have time to unpack here.

But on Sunday, Parasite took home the biggest trophy of the night. Winning not just Best Picture, but also Best Original Screenplay, Best Director, and Best International Feature, Parasite broke down one of the biggest barriers in Oscars history.

Brad Pitt is in many ways the quintessential movie star, but until this year, his only Oscar wasn’t for acting. Pitt won his acting Oscar on Sunday for his supporting role in Once Upon a Time in Hollywood, but he won his first Oscar in 2014. That was the year 12 Years a Slave won the Oscar for Best Picture — making Brad Pitt, who produced the film, an Oscar winner.

”At the end of the day we just hope that this film remains a gentle reminder that we’re all equal,” Pitt said at the time. “We all want the same, we want dignity and opportunity for ourselves and our family.”

In accepting his Best Supporting Actor Oscar on Sunday, Pitt opined his speech with a comment about President Donald Trump’s recently concluded impeachment trial, quipping, “They told me I only have 45 seconds up here, which is 45 seconds more than the Senate gave John Bolton this week.”

Waititi is only the third person of indigenous descent to ever win an Oscar. The first was Buffy Sainte-Marie, who won for Best Original Song in 1982, and the second was Wes Studi, who was awarded an honorary Oscar last summer.

Accepting the Oscar for Sound Editing in Ford v Ferrari, Donald Sylvester pointed toward one of the biggest changes that’s happened in Hollywood over the past year: the end, as we knew it, of an iconic Hollywood stalwart.

“Ford v Ferrari is probably the last film ever made by 20th Century Fox,” Sylvester said, a little ruefully.

But that all changed in 2019. First came the Disney acquisition; then, just a few weeks before the Oscars, Disney announced that it would be dropping the “Fox” from both studios’ names. 20th Century Fox became 20th Century Studios; Fox Searchlight became Searchlight Pictures. (Some insiders speculated that Disney was nervous about having the name “Fox,” now associated with Fox News, linked with the Disney brand long-term.)

So yes, Ford v Ferrari probably is the last 20th Century Fox movie — and with four Oscar nominations and two wins (for sound editing and film editing), it at least went out with style.

This year, the Oscars preceded the award for Original Score with a 42-piece orchestra playing a medley of all the nominees — and that medley was conducted by a woman, marking the first time a woman has ever conducted the Oscars orchestra. The woman in question was the Irish composer and conductor Eimear Noone, who told NPR of the milestone, “What we’re trying to do is make it unremarkable. And that’s what makes it special, ironically.”

To top things off, a woman ended up winning the category as well. Joker composer Hildur Guðnadóttir ended up taking home the statuette for Best Score, becoming the fourth woman to win in the category overall and the first since Anne Dudley won in 1997 for The Full Monty. Guðnadóttir was also the composer for HBO’s Chernobyl, for which she won both an Emmy and a Grammy.

For all the barriers broken at the 2020 Oscars, one wall seemed to rise back up. Both Krysty Wilson-Cairns of 1917 and Greta Gerwig of Little Women were nominated for writing awards, in the Original Screenplay and Adapted Screenplay categories, respectively. Both lost. As Award Watch’s Erik Anderson pointed out on Twitter, that loss means that no woman won a writing award at the Oscars for a movie made in the 2010s. The 2010s is now the first decade for which that is true since the 1960s.

Should people of color get access to the Covid-19 vaccine before others?
Congress has finally reached a deal on coronavirus stimulus
Joe Biden maintains a massive lead in a new South Carolina ranked-choice poll
Poll: The majority of Americans now support impeachment
Mike Bloomberg is proof that you can’t buy a presidency
The world’s most livable city is a smoker’s paradise