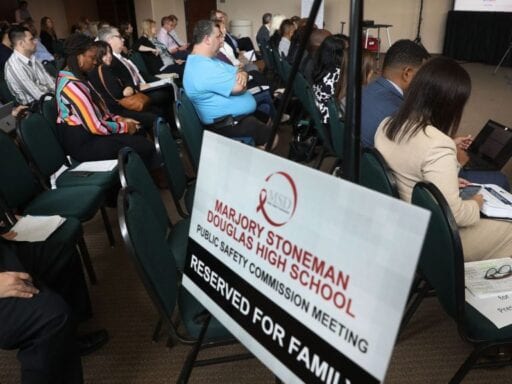 Andrew Medina and another unarmed guard were terminated this week after sexually harassing students in February 2017.

A security monitor at Marjory Stoneman Douglas High School in Parkland, Florida, who had previously been suspended for sexually harassing high school students in 2017 — including one teenager who was among the 17 victims in February’s mass shooting — has been fired.

The Broward County School Board fired the guard, Andrew Medina, as well as another security guard, David Taylor, on Tuesday, according to a local ABC affiliate. Medina’s suspension was first reported by the Florida Sun Sentinel.

Medina, who also worked as the school’s junior varsity baseball coach and was unarmed, spotted the Parkland gunman entering the campus on the day of the shooting. He told investigators that he recognized him as the “crazy boy,” but did not interrogate him, according to the Sun Sentinel.

Medina radioed ahead to his colleague David Taylor to warn him of the “suspicious kid;” Taylor, also unarmed, hid in a janitor’s closet when he heard gunfire. Medina did not call in the emergency code to alert law enforcement that a shooter was on campus, though he told investigators he had heard gunfire.

The guards’ action were among the security failures before and during the shooting that compounded the tragedy. Medina and Taylor had previously been reassigned before their termination this week.

Medina, who was 39, had previously been suspended for sexually harassing students in February 2017, including Meadow Pollack, a senior at Marjory Stoneman Douglas who was killed in the massacre in 2018.

A discipline committee had recommended Medina be fired after the harassment incident, but the decision was overruled, according to the Sun Sentinel. Medina was accused of asking one student out on a date and making inappropriate comments to another. The school board agreed with the finding of inappropriate contact, but said in a statement that a three-day suspension was given because it was essentially a he-said/she-said situation: “there was no direct evidence to distinguish between the conflicting statements provided by the students and the employee, and there were no previous records of discipline for the employee.”

Andrew Pollack, Meadow’s father, told the Associated Press earlier this month that “it’s politically incorrect that they didn’t fire him because if they did, maybe they would have had someone competent to stop [Cruz] from getting on the campus.”

The security breakdown at Parkland

Perhaps what’s most remarkable about this story is that Medina and Taylor weren’t fired until now — almost five months after the shooting.

It’s not the first report of a security failure in the Parkland shooting. The school district also faced pressure because its armed school resource officer, Scot Peterson, never entered the school building during shooting. He later blamed miscommunication on his failure to rush inside, including the belief that the shooter was firing from outside the building.

Local and federal law enforcement also came under fire for its failure to stop Cruz. The FBI didn’t act on a tip that warned that Cruz wanted to kill people, and the Broward County sheriff failed to write up a report that Cruz could be a “school shooter in the making.”

Unarmed and armed security monitors at Marjory Stoneman Douglas were unable to stop Cruz from carrying out his massacre. But in the wake of the school shooting and renewed gun control efforts, Florida passed legislation allowing some school employees to be armed, in addition to some modest gun control measures.