Paul Manafort was just sentenced to almost 4 years in prison 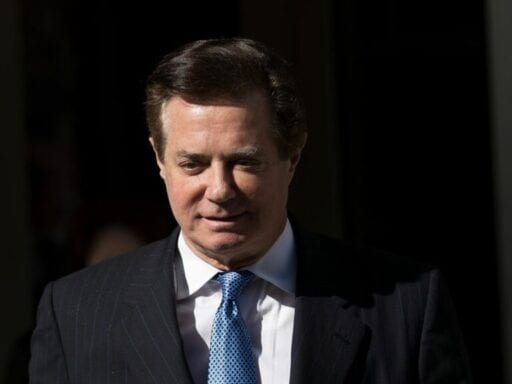 The sentence was far lighter than expected — but Manafort has another sentencing next week.

Former Trump campaign chair Paul Manafort was sentenced to 47 months in prison by a federal judge Thursday — in a far lighter sentence than was expected.

Manafort had been convicted of eight counts of filing false tax returns, bank fraud, and failure to report foreign assets last August, in the only case brought by special counsel Robert Mueller that has gone to trial so far.

But Judge T.S. Ellis III opined that Manafort had lived “an otherwise blameless life,” and that the probation office’s guideline sentence of 19 to 24 years would be “excessive,” according to CNN’s Shimon Prokupecz. Instead, Ellis gave Manafort just under four years.

Manafort is not out of the woods yet, however. He will be sentenced for a second set of crimes by Judge Amy Berman Jackson in Washington, DC, next week. Among Jackson’s decisions will be whether to let Manafort serve that second sentence concurrently with his first one — or consecutively. (That is, whether the DC sentence should be added on top of Ellis’s 47-month sentence.)

It was widely believed that Manafort’s best chance of getting out of prison anytime soon was through a pardon from President Donald Trump — a move the president has conspicuously declined to rule out. And while that still may be the case, depending on what Jackson decides next week, Ellis’s lighter-than-expected sentence was just about the best Manafort could have hoped for on Thursday.

Manafort is a somewhat legendary Republican operative and lobbyist who spent a decade working for pro-Russian Ukrainian politicians before joining Trump’s presidential campaign in 2016.

Because of his ties to pro-Russian interests, Manafort has long been a major figure of interest to investigators probing whether the Trump campaign conspired with Russia to interfere with the election — and he ended up being the first person indicted by Mueller. His legal road since then has been long and winding:

What Manafort’s actually being sentenced for

During Manafort’s Virginia trial, prosecutors laid out a two-part case.

First, they alleged that in the years before Manafort joined the Trump campaign, he’d gotten paid millions for his work for Ukrainian politicians. Then, he moved $30 million of that money from foreign shell companies into the US — but he didn’t disclose this income on his tax forms, pay taxes on it, or fill out legally required disclosures of his foreign accounts. For all this, he was convicted of five tax charges and one failure to declare foreign accounts charge.

Second, Mueller’s team focused on what Manafort allegedly did once he lost his Ukrainian income after the country’s president was deposed. They claimed he tried to conjure up more cash via bank fraud — and was convicted of two counts for that.

Then, in the District of Columbia, Manafort eventually pleaded guilty to a broad “conspiracy against the United States” — in which he admitted unregistered lobbying and money laundering related to the Ukraine work — as well as “conspiracy to obstruct justice” (his attempts to get witnesses to stick to a false story about that work). He also admitted to the truth of all the Virginia charges filed against him.

Now Manafort has been sentenced. Next week, he’ll be sentenced again.

When Judge Ellis began proceedings Thursday, he emphasized that Manafort was not being sentenced for any crimes connected to the Russian government. He then ruled in favor of the government, and against Manafort’s team, on several contested topics related to the sentencing.

Later, Greg Andres, a prosecutor on Mueller’s team, told the judge that Manafort provided no new useful information during his 50 hours of interviews with federal prosecutors.

“It wasn’t information we didn’t know,” Andres said, according to CNN’s Katelyn Polantz and Josh Campbell. “The reason he met for 50 hours was because he lied.”

Manafort himself spoke for a few minutes, asking for compassion from the judge and saying he felt “humiliated” and “shamed” — but he didn’t quite apologize.

“No apology. No contrition. No reference to his crimes. Lots of talk about how tough this has been for him and his family,” NBC News’s Ken Dilanian tweeted.

And while Ellis reportedly said he was surprised Manafort didn’t apologize — he didn’t really seem to hold it against him, opining that Manafort’s life had been otherwise “blameless,” before making a dramatic downward departure from the sentencing guidelines.

Next week, Manafort will find out if Judge Jackson sees things the same way.

For more on the Mueller probe, follow Andrew Prokop on Twitter and check out Vox’s guide to the Trump-Russia investigation.

There’s finally a drug for postpartum depression. Too bad it’s $34,000.
How Biden’s stimulus bill could actually build back better
The 4 plans to end social distancing, explained
Hubble can see galaxies impossibly far away. Here’s what happens when it looks at Mars and Saturn.
Trump campaign lawyer breaks with Trump over the Capitol insurrection
Guilty until proven innocent: how we treat people who report assault