Paul Ryan just let Trump off the hook on Putin 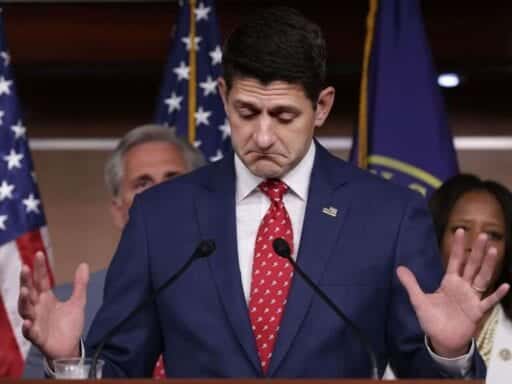 When it comes to Trump and Putin, Republicans have made their choice.

President Donald Trump’s meeting with Russian President Vladimir Putin on Monday morning, in which Trump provided cover for Putin’s interference in the 2016 election, elicited some heated criticism from leading Republicans in Congress. This prompted an obvious question: Would Republicans put their money where their mouth is, and actually use their power to punish Trump?

Well, House Speaker Paul Ryan was asked that question at Tuesday presser — and he made it clear that the answer was “no,” at least as far as the GOP leadership was concerned.

Here’s the key exchange between Ryan and a reporter:

RYAN: I understand the desire and the need to have good relations. That’s perfectly reasonable. But Russia is a menacing government that does not share our interests and does not share our values. And I think that should be made very, very clear.

Note how weaselly Ryan’s answer is. The question wasn’t, “What are you doing to punish Russia?” It was, “How can you constrain Trump from cozying up even more to Putin?” That isn’t a problem that can be solved by new sanctions. It would require passing legislation that puts limits on the president’s power to change US policy on a whole host of foreign policy issues (like Ukraine or Syria), or block Trump from firing special counsel Robert Mueller and ending the Russia collusion probe.

But doing something like that would, of course, provoke a major fight with Trump. Ryan is so unwilling to do that he won’t even think about proposing such measures. Instead, he moves to the safer ground of hypothetical new Russia sanctions that may never actually emerge and that wouldn’t really constrain Trump from changing US policy on Russia.

This speaks to a vital point about the GOP’s “backlash” against the Putin meeting. Ultimately, congressional Republicans mostly care more about staying in Trump’s good graces — and avoiding a fight that could jeopardize their legislative agenda and anger the pro-Trump base before the upcoming midterm elections — than about the ways that Trump is taking a hammer to decades of US foreign policy on Russia and other issues.

Republicans in Congress simply place a higher value on party unity than on the foreign policy principles they claim to stand for. If they didn’t, Ryan would actually be talking about new laws to constrain Trump.

That isn’t a value judgment, or even necessarily a criticism. There’s a case, from the Republican point of view, for refusing to cross Trump even when he tramples on years of conservative orthodoxy.

But Ryan isn’t making that case. He, and the rest of the mainstream GOP, is trying desperately to pretend that you can be anti-Putin and pro-Trump. But Monday’s presser made it clear that’s impossible.

Dave Chappelle’s SNL monologue was shrewd and political — but more chill than expected
Leigh Bardugo turns Yale into a haunted, haunting fantasy world in Ninth House
An ex-cardinal has been defrocked for sex abuse. This has likely never happened before.
President Trump’s new immigration proposal would be terrible for tech
The race for presidential delegates has officially begun. Track them here.
These senators are going after the biggest climate villains in Washington