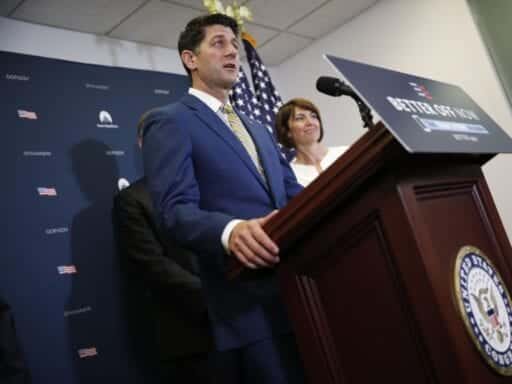 This is not how Congress works.

Speaking to reporters Thursday morning at the Economic Club of Washington, House Speaker Paul Ryan had three clear messages on trade: He thinks the Trump administration’s trade wars are misguided, he doesn’t intend to do anything about it, and he is a deeply dishonest person who is committed to pretending that there’s nothing he can do about it.

“New tariffs are not the solution” Ryan tells the Economic Club of Washington, DC.
(Applause)
“It’s the only applause line I got all day? Good grief!”

Ryan rules out House action on tariffs.
“You would have to pass a law saying ‘don’t raise those tariffs’ and the president would have to sign that law. That’s not going to happen.”

Here’s the reality. Back in September of 2016, the Obama administration vetoed a bill that was supported by large bipartisan majorities in both houses of Congress. Consequently, Congress voted to override his veto.

If Paul Ryan and other congressional Republicans who’ve long supported free trade wanted to write legislation curtailing Trump’s ability to invoke spurious national security claims to raise taxes on imported goods, it seems overwhelmingly likely that they would be able to get the votes to do so.

The big question would, in fact, be whether Democrats — who as a congressional caucus have generally been much more skeptical of trade — would bail Trump out by upholding his veto. Given both the prevailing anti-Trump sentiment in the party and the reality that nobody can see any real strategy behind Trump’s trade approach, that seems unlikely to me, though it’s certainly possible.

But Ryan is voluntarily surrendering without a shot, all while pretending that he has no choice.

Senate Republicans were always going to do whatever they wanted with the Supreme Court vacancy
Trump just canceled Pompeo’s big trip to North Korea. That’s a really bad sign.
What it’s like working at the polls in the middle of a pandemic
The governor of Kentucky just pardoned a man convicted of abusing his 6-year-old stepdaughter
Trump’s latest Fox Business interview was an elaborate distraction campaign
The Expanse is an excellent sci-fi space opera. But it’s fundamentally a detective show.