Pelosi announces Democrats will draft articles of impeachment against Trump 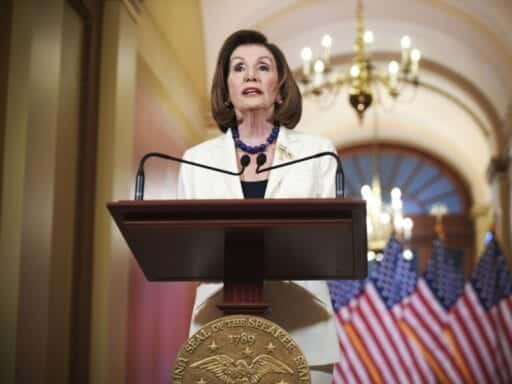 Here’s what previous articles have looked like, and what to expect from the new ones.

The impeachment train is moving full steam ahead — and the next step for House Democrats is to actually write up what they’re impeaching President Trump for, Speaker Nancy Pelosi announced Thursday morning.

“The president’s actions are a profound violation of the public trust,” Pelosi said. “His wrongdoing strikes at the very heart of our Constitution.” So, she concluded, “Today, I am asking our chairmen to proceed with articles of impeachment.”

These articles will be, essentially, the “charges” against the president that the House of Representatives will draw up, and then vote on, deciding whether to send them to the Senate for a trial.

The process of writing them will be handled by the House Judiciary Committee and its chair Jerry Nadler (D-NY) in the coming days, though Pelosi’s language about “chairmen” implies a role for House Intelligence Committee Chair Adam Schiff (D-CA) as well. And while Democrats haven’t officially confirmed the content of any article, Wednesday’s hearing offered some clues on what the Judiciary Committee may be thinking.

Earlier this week, NBC’s Heidi Przybyla reported that she was hearing a very similar breakdown from her Judiciary Committee sources. She wrote that their plans were still developing, but they were considering:

On the screen in the hearing room…future articles of impeachment?

The first two are likely, the third is still being debated by Democrats pic.twitter.com/89d1dg82Hw

As Przybyla’s reporting suggests, Democrats have to decide on one key question: Do they focus their articles entirely on the Ukraine scandal, or do they go broader?

Now, that’s not the last stage in the process — it’s possible for the Judiciary Committee to draft some articles that are then rejected by the full House. That’s what happened with Clinton — the full House approved two of the four proposed articles, and rejected the other two. But if even one article of impeachment is approved, that means the president is impeached, and that the process will then move to the Senate for a trial.

All in all, the decision to move to drafting articles of impeachment is another sign that Democrats are moving ahead with a swift impeachment effort — one that will likely conclude in the House before the end of the year, setting the stage for a Senate trial in January.

Past presidential articles of impeachment, explained

If the Judiciary Committee follows modern practice, it won’t take very long to write these articles of impeachment — because the impeachment articles for Richard Nixon and Bill Clinton were all quite brief.

That is, they aren’t written as dense legislative text. And they don’t lay out the evidence the House has found. Instead, the articles simply sum up the offenses the president is charged with. We’re talking a few hundred words each. (You can read Nixon’s here, and Clinton’s here.)

The Constitution says a president can only be impeached for “treason,” “bribery,” or “other high Crimes and Misdemeanors,” so each article is designed to charge one of those offenses.

Here’s a relevant excerpt from the beginning of Article 1, describing the Watergate break-in and accusing Nixon of covering it up:

Article 1: “On June 17, 1972, and prior thereto, agents of the Committee for the Re-election of the President committed unlawful entry of the headquarters of the Democratic National Committee in Washington, District of Columbia, for the purpose of securing political intelligence. Subsequent thereto, Richard M. Nixon, using the powers of his high office, engaged personally and through his close subordinates and agents, in a course of conduct or plan designed to delay, impede, and obstruct the investigation of such illegal entry; to cover up, conceal and protect those responsible; and to conceal the existence and scope of other unlawful covert activities.”

Here’s an excerpt of Article 1 from the Clinton impeachment, which was approved by the House, accusing him of lying to the grand jury about his affair with Monica Lewinsky:

On August 17, 1998, William Jefferson Clinton swore to tell the truth, the whole truth, and nothing but the truth before a Federal grand jury of the United States. Contrary to that oath, William Jefferson Clinton willfully provided perjurious, false and misleading testimony to the grand jury concerning one or more of the following: (1) the nature and details of his relationship with a subordinate Government employee…

What the articles of impeachment against Trump might say

Earlier this week, Adam Schiff’s Intelligence Committee released a report on their findings in the impeachment inquiry so far — a report that was divided into two parts.

The first part, titled “The President’s Misconduct,” had the topline summary: “The President Conditioned a White House Meeting and Military Aid to Ukraine on a Public Announcement of Investigations Beneficial to his Reelection Campaign.”

That could well be the gist of one article of impeachment, the one the Judiciary Committee’s slide called “abuse of power & bribery.” This article could sum up the basic facts of the Ukraine scandal so far. It is also possible that there could be separate articles summarizing the same basic facts but with a different “offense” — for instance, one focusing on abuse of power, and the other focusing on bribery.

The other report in play for a potential impeachment article is the Mueller report — specifically, Volume II of that report, which describes Mueller’s findings on whether President Trump obstructed justice by interfering with the Russia investigation.

Mueller collected evidence on matters such as Trump’s attempt to get then-FBI Director James Comey to drop an investigation into former National Security Adviser Michael Flynn (which failed); Trump’s attempts to get then-Attorney General Jeff Sessions to reverse his recusal from oversight over the Russia probe (which failed); Trump’s firing of Comey; Trump’s order to White House counsel Don McGahn to fire Mueller (which failed); and Trump and his legal team’s urging key figures (like former Trump campaign manager Paul Manafort) not to flip while attacking those who did flip (like former Trump lawyer Michael Cohen).

The tricky part is that Mueller declined to outright say whether any of this rose to the level of obstruction of justice — in part, he said, because Justice Department guidelines state he shouldn’t indict a sitting president. That would leave it up to Democrats to decide which of this conduct is obstructive, and which merits inclusion in an article of impeachment — if they decide to focus one on the Mueller report at all.

Kanye West says he wants nothing to do with Blexit apparel
Watch: Alex Jones and Marco Rubio nearly come to blows in the Senate hallway
Biden maintains a strong lead over Trump in new national polls
Welcome to the Escape Issue of The Highlight
Vox Sentences: Syria’s final push
Beyoncé’s Lemonade is one of the best movies of the 2010s