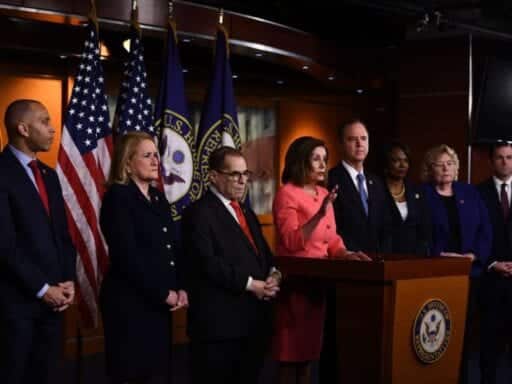 Here’s who will make the case against Trump in the Senate.

House Speaker Nancy Pelosi has chosen her team to prosecute the case against President Donald Trump in the Senate.

On Wednesday morning, Pelosi announced seven impeachment managers, who will be tasked with arguing to the Senate that Trump should be removed from office over his attempt to pressure Ukraine to investigate a political opponent, and over his administration’s stonewalling of Congress’s inquiry into that matter. They’ll be led by Rep. Adam Schiff (D-CA), who chairs the House Intelligence Committee and ran the House’s impeachment inquiry last year.

The House will vote on a resolution officially naming the managers and transmitting the articles of impeachment to the Senate later Wednesday. Senate leaders have said they anticipate beginning the trial this coming Tuesday.

And though the action is moving to the Senate, it’s actually the impeachment managers — and Trump’s legal team — who will be doing most of the talking there. Senators, whose role in the proceedings combines aspects of a jury and a court, are mostly not permitted to speak during the trial’s proceedings. (At a certain point, they can submit written questions, which will be read out by Chief Justice John Roberts.) So this will be a very high-profile job for these seven impeachment managers.

Pelosi said she chose this team due to their experience as “litigators” and their “comfort level in the courtroom.” But overall, the lineup is dominated by close allies of leadership rather than firebrand liberals. Notably, it does not include Rep. Justin Amash (I-MI), the former Republican who left his party over his support for the impeachment inquiry, and who some Democratic moderates had suggested be on the team.

The lineup is smaller than the roster of 13 impeachment managers House Republicans chose when they impeached President Bill Clinton in 1998, suggesting that Pelosi preferred a more coherent case rather than handing out these high-profile gigs to reward as many members as possible.

Lofgren is a noteworthy choice, since she played a role in both recent impeachment efforts — she was a Judiciary Committee staffer during the Nixon inquiry, and she was a member of that committee during Clinton’s impeachment. Vox’s Ezra Klein interviewed Lofgren about this last year.

Crow, meanwhile, is an unusual pick, since he is a freshman House member who serves on neither of the key committees involved in the inquiry (Judiciary and Intelligence). However, he is a lawyer, a veteran, and a moderate — and Pelosi likely hopes he will come off as reasonable to a national audience.

For more on what the impeachment managers will do, and what the rest of the trial will look like, check out our longer explainer on what comes next.

Joe Biden smashed his single-hour fundraising record after the first presidential debate
“They’re all Americans”: What Biden gets about the pandemic that Trump doesn’t
Twitter is considering warning users when politicians post misleading tweets
The importance of Elijah Cummings’s fight for voting rights
Obama’s new statement on the protests exposes Trump’s failures
Mike Pence is officially part of the Trump impeachment investigation