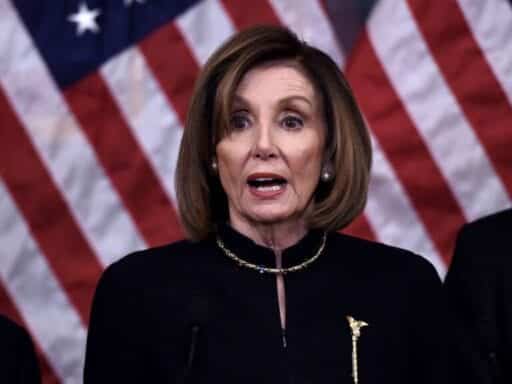 The speaker said she wants to know more about what the process will look like in the Senate.

After overseeing the votes to impeach President Trump Wednesday night, Speaker Nancy Pelosi has a few next steps to take: naming impeachment managers to make her case in the Senate and transmitting the approved articles of impeachment to that upper chamber.

Except, Pelosi announced at a press conference after the votes, she’s not going to do either of those things just yet.

Voicing concern about Senate Majority Leader Mitch McConnell’s willingness to hold a fair trial, Pelosi announced for the first time that she might not, in fact, be in a rush to send the articles of impeachment over to the Senate. She said instead she wanted to hear more about how the Senate planned to conduct the trial first.

“We cannot name managers until we see what the process is on the Senate side,” Pelosi said. (Impeachment managers are members of the House who will serve, essentially, as prosecutors against Trump in the Senate trial. And to be clear, Pelosi technically can name them now; she is making a strategic decision not to do it yet.)

The move is an apparent adoption of an unusual strategy backed by Harvard law professor Laurence Tribe in a recent Washington Post op-ed — that Democrats should impeach Trump, but hold back on sending the articles to the Senate, to avoid a hasty acquittal or dismissal of the charges engineered by McConnell.

At the press conference, Pelosi criticized comments McConnell made on Fox News last week that suggested he was very much in the tank for Trump. “Everything I do during this, I’m coordinating with the White House counsel,” McConnell said then. “There will be no difference between the president’s position and our position as to how to handle this.

Asked if she could guarantee she’d send over the impeachment articles to the Senate at all, Pelosi said, “That would have been our intention, but we’ll see what happens over there.” She also said she hopes she’ll get more information from the Senate “soon.”

It’s an intriguing move. But what, exactly it will mean in practice is very far from clear. Practically, other legal experts aren’t sure Pelosi can really put off a trial in the Senate now that the House has voted to impeach Trump — the Senate could arguably just choose to begin it without her say-so.

This is apparently an attempt to play hardball with McConnell to get him to agree to a fairer process. But it’s unclear whether Pelosi truly does have any leverage over McConnell and Senate Republicans, the key decision makers here. They’re not necessarily eager to hold this trial. And while President Trump surely wants to be officially “acquitted,” he likely wouldn’t want to make any concessions to Democrats to get there.

South Carolina wants to ban lifesaving medical treatments for trans kids
RBG, the 2020 election, and the rolling crisis of American democracy
The Trump administration says it must lock up families to keep them together. That’s not true.
The Georgia results make more stimulus much more likely
With “Kill This Love,” K-pop queens Blackpink have made YouTube and iTunes history
The wrong US response to Russia and China may trigger a “new Cold War,” warns Stanford University’s ...