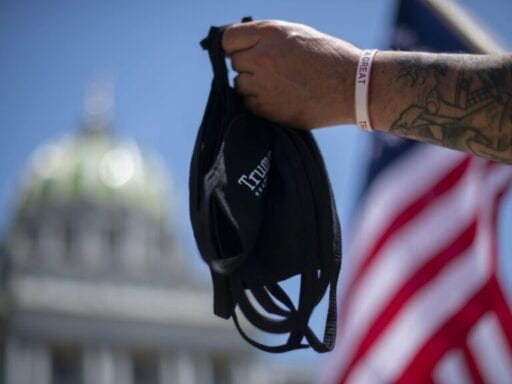 A vendor hawks Trump-themed face masks for $10 during a protest rally outside the Pennsylvania Capitol Building regarding the continued closure of businesses due to the coronavirus pandemic. | Mark Makela/Getty Images

A Republican lawmaker got sick, and no one told Democratic representatives.

Pennsylvania state Rep. Brian Sims, a Democrat, posted an explosive Twitter thread Wednesday evening warning that he may have been exposed to coronavirus by his Republican colleagues — and that those colleagues kept him in the dark.

RESIGN: Today we learned that House Speaker @MikeTurzai has known that Republican Members have either tested positive, or been quarantined, and withheld this information from Democrats including those of us who serve on the committees with those members!

Shortly before Sims’s tweets, a Republican representative, Andrew Lewis, released a statement admitting that he “was tested for COVID-19 and on Wednesday, May 20, I was notified that my test came back positive.” Lewis said that he self-isolated, and that he “contacted the House of Representatives, and our caucus Human Resources department.” Lewis also claims that he worked to determine “exactly who I may have been in contact with, and who I may have possibly exposed to the virus.”

The Pennsylvania House of Representatives conducted in-person sessions while Democrats say they were unaware of Lewis’s diagnosis.

In this picture, one state rep was tested positive and the other is in self quarantine. I’m in the middle with my eyes “closed” or kept in the dark. The Democratic caucus should have been notified. https://t.co/dV8dOVKJXZ pic.twitter.com/cOROHa1Sl8

And yet, while Lewis tested positive on May 20, Democrats say they did not learn that one of their colleagues may have exposed them to the virus until Wednesday, May 27. According to Rep. Dan Frankel, the top Democrat on the House Health Committee, members of the Democratic caucus learned on Wednesday “that four members of the Republican Caucus have been in self quarantine after one of those four tested positive for COVID-19 a week ago.”

One of those four members, Republican Rep. Russ Diamond, posted a lengthy statement on Facebook Wednesday evening attacking the very idea that public health officials should engage in contact tracing to determine who may have been exposed to the virus.

Diamond says he made the decision to self-isolate “because I wanted to provide an example of how responsible adults can conduct their lives without the need for heavy-handed government mandates,” before claiming the real problem is that someone might erroneously be advised to quarantine:

There’s a lot to object to about contact tracing of this sort. I was offered no proof the person I was in “contact” with had already contracted, and was an asymptomatic carrier, of COVID-19 on May 14. And what if this notice had been sent to me in error? I happen to know someone else who received a similar notice in error. That person was fortunate enough to be able to clarify and get the record corrected and avoid self-quarantine. However, if a government agency with enforcement authority would be sending out these notices, would one be able to obtain such a correction? I highly doubt it.

As the Washington Post notes, Diamond is a “vocal opponent of wearing masks.” On the same day that Diamond began his self-quarantine, he spoke before a Pennsylvania House committee without wearing a mask.

Yet despite his behavior, Diamond is right about one thing. Contact tracing is not a perfect system. Contact tracers are a kind of public health detective, who interview people diagnosed with the virus and try to uncover whom they may have exposed to the disease. But respiratory viruses such as the novel coronavirus are difficult to track because many people infected with the virus won’t remember everyone they may have been in contact with; and they might not even be aware of individuals that could have entered a room shortly after the infected person left.

That is why Republicans should have notified their Democratic counterparts of Lewis’s infection. Even if Lewis and his Republican colleagues did make every reasonable effort to uncover whom Lewis might have exposed to the virus, such efforts are not 100 percent reliable. And if Lewis did unknowingly infect someone before he went into isolation, that person could also spread the disease throughout the state legislature and beyond.