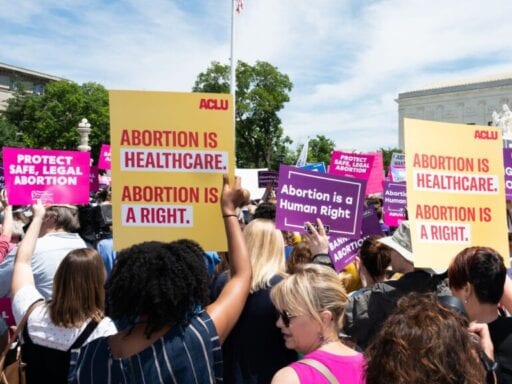 Share
Loading...
Demonstrators rally in front of the Supreme Court in Washington, DC, during a day of action against abortion bans around the country on May 21, 2019. | Michael Brochstein/SOPA Images/LightRocket via Getty Images

The state is the latest to consider a bill that would ban the procedure as early as six weeks into pregnancy.

The six-week abortion bans that swept the country earlier this year have all been blocked by courts. But that hasn’t stopped legislators in other states from proposing their own.

The latest is Pennsylvania, where Republicans in the state legislature introduced a bill on Monday that, like bills passed in Georgia, Ohio, and elsewhere, would ban abortion when a fetal heartbeat can be detected, around six weeks into pregnancy. This is before many people know they are pregnant.

“When you hear a baby’s heartbeat, everything changes,” Pennsylvania state Rep. Stephanie Borowicz, one of the bill’s sponsors, said at a press conference Monday, according to PennLive. “If you can be declared dead when the heart stops, why not declared alive when it starts?”

Republicans control both houses of the Pennsylvania state legislature, but Gov. Tom Wolf, a Democrat, has promised to veto the bill.

In recent months, abortion opponents have been turning their focus away from near-total abortion bans like the Pennsylvania bill. Instead, some groups are supporting more incremental legislation that they believe has a better shot at surviving court challenges. The incremental strategy is about to get one of its biggest tests ever when the Supreme Court hears June Medical Services v. Gee, a case involving clinic restrictions in Louisiana that could be an opportunity for conservatives on the Court to overturn or significantly weaken Roe v. Wade.

That doesn’t mean every state has abandoned a more aggressive approach, though. In addition to Pennsylvania, South Carolina is considering a ban on abortion after a heartbeat can be detected. On Tuesday, state senators voted to strip exceptions for rape and incest from the bill, and advance it to a full committee hearing.

Someone who has an abortion after rape or incest is “killing an innocent human being” and “punishing a person wrongfully for something they, he or she, had nothing to do with,” state Sen. Richard Cash, a Republican, said during debate on the bill on Tuesday.

The fact that these bills have been proposed is a reminder that, even when the incremental approach could be about to bear fruit, there are still plenty of legislators around the country who want to ban abortion very early in pregnancy. What happens next in South Carolina, and especially in the swing state of Pennsylvania, will show how much support they still have.

In Pennsylvania, Borowicz and state Sen. Doug Mastriano, also a Republican, introduced legislation in the state House and Senate on Monday that would ban abortion after a fetal heartbeat is detected. The bill would allow an abortion after that point if a doctor determines that “the abortion is necessary” — the bill does not specify how the doctor should determine that and does not offer a clear exception for rape or incest.

“We are asking the Commonwealth to stand with us,” Borowicz said at a press conference Monday, according to PennLive. “I believe we have the upper hand in Pennsylvania and across the nation. We will not be silent any longer.”

She was joined by other legislators (the House bill has more than 30 co-sponsors), as well as children holding signs reading, “Hear a Heartbeat. Hear Him.” Members of the Pennsylvania Pro-Life Federation, which describes itself as “the largest pro-life organization” in Pennsylvania, were also in attendance, according to PennLive.

The future of the bill is uncertain, to say the least. To override the governor’s promised veto, the bill’s supporters would need a two-thirds majority in both the state House and Senate, meaning a significant number of Democrats would have to vote in favor. And even if the bill does become law, it is certain to be challenged in court, as Ivey DeJesus notes at PennLive.

The South Carolina legislature is debating a similar ban

But Pennsylvania isn’t the only state where lawmakers are backing a new near-total ban. In South Carolina, state senators held a subcommittee hearing on Tuesday on House bill 3020, which, like the Pennsylvania bill, would ban abortion after a heartbeat can be detected. On Tuesday, the subcommittee voted to advance the bill to a full committee hearing. The members also voted to strip an exception for rape and incest from the bill.

“Killing the unborn baby, if a baby is conceived as a result of rape or incest, will not undo that crime,” said state Sen. Cash during debate on the bill.

He added allowing abortion could actually help people who commit incest cover up their crimes. “It is in fact likely that the person who is committing the crime of incest has influenced and perhaps even forces the young woman to go have an abortion to cover up the crime,” he said.

Meanwhile, Democrats on the committee criticized the bill’s sponsors for following in the footsteps of other states that have passed near-total bans.

“If South Carolina is going to follow any other state, we need to follow those states that have sweeping education reform” and physical and mental health services for survivors of sexual assault, said Margie Bright Matthews, the only woman on the subcommittee.

State Sen. Kevin L. Johnson also criticized the bill’s backers for trying to restrict abortion when South Carolina does not provide adequate health care and education for children. “If life begins at conception, it does not end at birth,” he said.

Ultimately, the bill passed out of the subcommittee, without the rape and incest exception, on a strict party-line vote. The bill next goes to a full committee for a hearing and could receive a vote on the state Senate floor when the legislative session begins in January. Republicans hold a majority in the Senate, and South Carolina Gov. Henry McMaster, a Republican, said earlier this year that he would sign a six-week abortion ban.

The anti-abortion movement has been moving away from aggressive bans. But that doesn’t mean they’re gone.

Like the Pennsylvania law, though, any six-week ban in South Carolina would be sure to face a court challenge.

Because they ban abortion before a fetus can survive outside the womb, the bills run counter to the Supreme Court’s decisions in Roe v. Wade and Planned Parenthood v. Casey, which established and reaffirmed Americans’ right to an abortion. Beginning in 2018, such bills passed around the country, in states like Iowa, Georgia, and Ohio. But one by one, all of them have been blocked in court.

To some degree, this was part of the plan. Many sponsors of the bills (and of Alabama’s more sweeping ban on abortion at all stages of pregnancy) have said they intended them to be challenged so they could make it to the Supreme Court and serve as a vehicle to overturn Roe.

But in recent months, more abortion opponents have voiced skepticism at this strategy. For example, the general counsel of National Right to Life, one of the nation’s most established anti-abortion organizations, testified against a near-total ban in Tennessee in August. His argument, and that of others in the anti-abortion movement, is that the Supreme Court is unlikely to uphold such sweeping legislation.

Instead, some abortion opponents are more optimistic about the future of clinic restrictions like one in Louisiana, which requires abortion providers to have admitting privileges at a local hospital. That restriction is at the heart of the case June Medical Services v. Gee, which the Supreme Court has announced it will hear this term. If the Court finds in favor of the state of Louisiana, it would open the door for states to pass more and more restrictions on abortion clinics, forcing them to close and eliminating abortion access in many places without a direct ban.

Gee presents a test of the more incremental approach to abortion restrictions that many groups have followed — with success — for years. But even if they’re successful before the Supreme Court, the bills in Pennsylvania and South Carolina are a reminder that others may still pursue outright bans on abortion.

During the South Carolina hearing, Sen. Cash argued that “from the earliest moments of a human life, that life is entitled to equal protection under the law.”

It was a reminder that for some abortion opponents, the debate is about fetal personhood, or guaranteeing a fetus all the same rights as a legal person. That philosophy has widespread potential legal consequences, including people who get abortions being charged with murder. And while such an approach may not have a clear path to success, that doesn’t mean its strongest advocates will abandon it anytime soon.

Covid-19 is way, way worse than the flu
Meatless meat is going mainstream. Now Big Food wants in.
The Trump administration is using the pandemic as an excuse to target immigrants and asylum seekers
Trump’s rigged election rhetoric puts Georgia Republicans in a bind
Aimee Stephens brought the first major trans rights case to the Supreme Court. She may not live to s...
If Republicans sour on Kavanaugh, here are 4 alternatives waiting in the wings