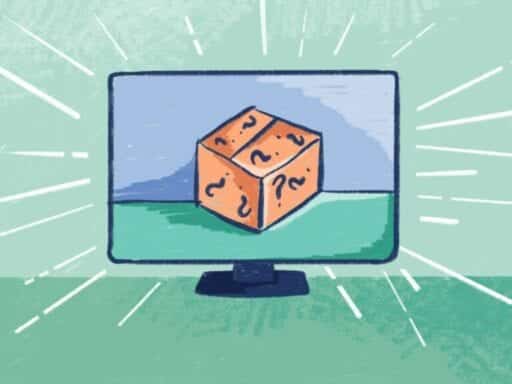 Personalized “mystery boxes” are a popular search on online marketplaces.

Every time she compiles a mystery box, Marsha McFadden draws a tarot card. The 28-year-old Wisconsinite runs an Etsy store called Smudge Shop Wi, where she sells a variety of trinkets, pendants, and polished rocks, for a variety of holistic purposes. As the description of a $99 handmade crystal blade explains, Smudge Shop Wi’s catalog assists its customers in everything “from cutting emotional cords to directing energy during a ritual.” But McFadden is also selling collections that are a little less user-determined: boxes filled to the brim with a hodgepodge of gnostic goods, chosen by the cards.

McFadden started selling mystery boxes at the beginning of summer, and she offers her customers three sizes — small, medium, and large — which retail for $20, $30, and $75 respectively. It’s difficult to reduce Smudge Shop Wi’s inventory of 200 or so items to its bare essentials, so McFadden has learned to rely on spirits for guidance; when you crack open the lid, you’ll find the golden frankincense, shark-tooth necklaces, and hematite rings you were destined to possess. This has always been the core appeal of mystery boxes; sometimes it’s more fun to leave things up to fate.

”I ask consent of whoever purchases one. Then I shuffle and pull a card, and I use that as the theme for the box,” she explains. “One time I pulled a card that meant desire, so I made a bundle of stuff that was about self-love and things like that. … I send a custom card with each box explaining everything that’s in there, so it really is personalized. It’s not just extra stuff.”

Today, the mystery boxes have emerged as one of Smudge Shop Wi’s hottest items. She’s not alone, either.

According to data provided to The Goods by Etsy, there have been over 495,000 search queries for “mystery boxes” on the site between January 2019 and July 2019. In total, there are nearly 6,000 results for mystery boxes on the site. eBay has also emerged as a primary bazaar for do-it-yourself blind boxes, though that company skews away from Etsy’s independent artistic craftsmanship. (Currently, there are 149 results on an eBay “mystery box” search query. Examples include an unmarked cardboard carton of secondhand jewelry and old CDs and DVDs.)

This trend disrupts the way we’ve traditionally thought about the business model. Normally, people like to know what they’re buying.

But in 2011, a legion of thirsty startups pioneered the idea of subscription boxes. These companies would sell a sealed box packed with curated bounties that appealed to the members of a niche enthusiast group, who only found out what they were getting when they opened the package for themselves. This sounds like an insane business pitch until you consider how much fun it is to unwrap presents. Essentially, the mystery-box gambit is a clever trick to fool millennials into paying for a year-round Christmas experience.

Perhaps you’ve heard some of these names during podcast ad reels: BarkBox mails its customers a cardboard box that promises at least two toys, two treats, and a chew toy every month. Birchbox does essentially the same thing but with makeup. NatureBox sends out payloads of anonymously sealed healthy snacks, and Loot Crate lets you unearth Deadpool shirts and vinyl ogre figurines, which are the sort of things you’d prefer arrive in unmarked packaging. Sometimes, blind-box subscriptions get truly avant-garde — there are multiple businesses that will send you stay-at-home relationship-strengthening “dates,” and the entire video game industry has pivoted its monetization strategy to selling 11 year olds nameless packs of in-game capital.

In total, there are nearly 6,000 results for mystery boxes on Etsy.

More recently though, the subscription box bubble has begun to burst. Fast Company reported that since the initial boom, 13 percent of box companies have ceased operations. BirchBox has gone from one of the marquee faces of the industry to a company drowning in debt and selling off equity to hedge funds. It’s also become increasingly clear that subscription boxes are in a business that’s more sinister than sending you care packages; Birchbox mined the data of over 1 million subscriber profiles in order to strengthen its marketing muscle. Everyone wants your paper trail now, even Big Cosmetics.

McFadden is the antithesis of all of that; she’s a single mother of two with an Etsy shop. Her greatest advantage is how homemade her mystery boxes feel compared to the rest of the field, and increasingly, it feels like DIY mystery boxes are the only sector of this industry that is truly insoluble. “When I pull a card, it really fine-tunes the box. It’s not like everyone is getting a sage, and everyone is getting a necklace,” she says. “[My boxes] are made just for them, rather than something mass-produced.”

The people that buy these boxes feel the same way. Tarah Wagner is a 34-year-old from Washington and a frequent customer of Smudge Shop Wi. She bought a mystery box earlier this year that was themed around “relaxing, creativity, and love.” In particular, Wagner appreciated how McFadden explained the significance of everything in the box, as if she were buying the privilege to receive a well-considered gift.

”I felt so loved and special when I got this box. I know that all of her products are ethically sourced and organic, which makes a huge difference for me since I’m burning these things in my house,” she says. “The quality and thoughtfulness wouldn’t be in a corporate-made box; they just throw things in there, regardless of what you need. Marsha [makes sure everything] applies [to me,] which it has every single time.”

But even if you don’t have a special relationship with the seller, customers are still able to stumble into small miracles when they buy anonymous DIY boxes. William Graves is a 38-year-old Doctor Who fanatic from Arkansas. (He can be found on Twitter as @DoctorWhoDad.) Earlier this year, he took a flyer on a $20 Doctor Who-themed mystery box he saw on eBay and was surprised to find that the contents added up to “way more than $20 worth of merchandise.”

”[It had] figures, books (hardback and paperback), a comic, and a Blu-ray,” he says. “DIY boxes are better [than corporate boxes]; there’s more variety.”

Each of the sellers I spoke to echoed that same philosophy. Intimacy is their top priority, but they still know how to fit a market deficiency when they see one. Oh Youngju is a 29-year-old from Seoul, South Korea. She started her Etsy shop three months ago, and in large part, it is dedicated to the ludicrously popular K-Pop boy band BTS. As a native Korean, Youngju has access to a variety of BTS fandom material that is either unavailable or overpriced in other countries. In her words, she’s a big BTS fan, who wanted to “share her products with other BTS fans.”

”It was difficult to list too many items individually, so I created a mystery box to sell them all at once,” continues Youngju. “A mystery box can sometimes be thought of as a mixture of unwanted or bad products, but I’m sending you all genuine [BTS merchandise.]”

But for true salt-of-the-earth DIY mystery boxes, you best turn to eBay. The flea-market giant’s arcane reputation looms large, and among the haunted dolls, gun-themed koozies, and out-of-print collectible card games, you will also find some wonderfully ersatz cardboard boxes. That’s where I met “Dave,” who declines to give his real name but tells me he lives in southern Indiana and buys out delinquent storage units as a hobby. As any Storage Wars veteran knows, the contents of the average overdue locker can be deliriously eccentric. So instead of selling off each artifact he recovers piecemeal, Dave found that packaging them together as a mystery box significantly cuts down on his idle time.

”It allows me to move a product extremely fast rather than doing single individual units on eBay, and at the same time give people a great thrill as well as an awesome product.” he says.

Dave speculates that the people who buy his mystery boxes either enjoy the quirkiness of purchasing another man’s cast-offs or are resellers like him who want to turn around the product inside quickly and efficiently. In that sense, amateur mystery boxes — just like more formal subscription boxes — scratch a gambler’s itch. This is one part of the craze that eBay would like to terminate. The company has issued some stringent rules stating that every mystery box sold on the platform needs to come with a tabulation of what a potential customer can expect to find in the box. A seller doesn’t need to say exactly what they’re sending out, but they must be clear about the broad classifications — DVDs, video games, clothing, fishing tackle — in the same way that a booster pack of Pokémon cards is guaranteed to contain at least one rare card.

In that sense, amateur mystery boxes scratch a gambler’s itch.

Etsy’s policy is less clear. The company doesn’t regulate mystery boxes, but the first rule in their terms of service mandates that everything sold on the platform must be “handmade, vintage, or craft supply.” More specifically, that means McFadden’s homespun witchy baubles are kosher, while the reselling of BTS overstock falls in a gray area. Ironically, it’d probably be legally prudent to sell those BTS items through eBay’s more liberal merchandising channels, but as always, secondary merchant websites are huge and unwieldy with a codex that is difficult to enforce. I don’t think Etsy’s top brass will prioritize the extermination of fangirl miscellany anytime soon, and Dave tells me that for as much noise eBay makes about its policy, he still sees plenty of mystery boxes that break the rules.

Frankly, these codes of law seem a little overrated. You can’t undermine human curiosity. These sellers understand how nice it for anyone to imagine a stranger making something special for them, and they’ve managed to convert that energy into a relevant business. “I think people are erring more toward the personalized [boxes] because they want to use their money on something they can keep forever,” theorizes McFadden. Even though she services customers all over the world, you’ll still know it’s your box when you open it.