People are running over George Floyd protesters. Are far-right memes to blame? 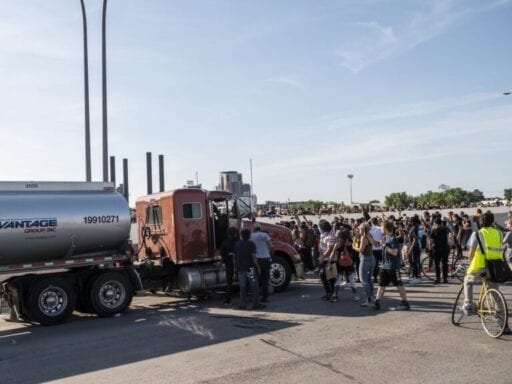 Share
Loading...
People react after a tanker truck drove into a crowd peacefully protesting the death of George Floyd on the I-35W bridge over the Mississippi River on May 31, 2020, in Minneapolis, Minnesota. | Stephen Maturen/Getty Images

An expert explains his theory on why vehicle-ramming attacks are happening across the country.

One of the most disturbing features of the nationwide protests that have erupted over the police killing of George Floyd involves law enforcement and other people running over demonstrators with their vehicles.

From New York City to Denver to Minneapolis to Bakersfield, California, a pattern has emerged: Wherever there are protesters demanding an end to police violence, there are police officers or counter-protesters using cars and trucks to run them over.

That’s troubling enough. But what’s more troubling still is these attacks don’t look like a series of coincidences. In fact, it’s completely possible — and perhaps likely — that a far-right ecosystem online is encouraging these attacks and congratulating people who carry them out.

That, at least, is Ari Weil’s theory. Weil is the deputy research director for the militant propaganda analysis team at the University of Chicago’s Project on Security and Threats.

In an illuminating Sunday night Twitter thread, Weil explained that the far-right tactic of running over protesters with vehicles stems back to at least 2015, when Black Lives Matter and Dakota Access Pipeline protesters started blocking off streets. In response, some who disagreed with those movements chose to drive right through the barricades — in some cases killing demonstrators, such as during the white supremacist rally in Charlottesville, Virginia.

That trend has continued into these latest protests. One of the most egregious incidents took place in New York City on Saturday when two police SUVs accelerated into a group of demonstrators trying to block their access. Luckily, no one died and there were no major injuries.

I called up Weil to talk more about this phenomenon. He told me that these sorts of attacks are becoming increasingly common because of far-right memes egging on people — including police officers — to run over protesters.

Which leads to a major concern: As protests around the country proceed, thousands of activists face a real, increased danger of being attacked by a vehicle.

Our conversation, edited for length and clarity, is below.

Before we get into the vehicle attacks themselves, why does it seem like these kinds of incidents are happening more often?

There’s an online environment that for years has been celebrating and encouraging these types of horrendous attacks.

It really goes back to the Black Lives Matter and North Dakota Access Pipeline protests in 2015 and 2016. They innovated the use of street-blocking protests to make their claims. But then the far right responded by running their vehicles through these protesters and that led to a whole series of “run them over” memes online that were shared to glorify and encourage more of these attacks.

What’s particularly worrisome is where those memes spread. Yes, among the extreme right, but also I know of at least four cases where law enforcement officers were sharing these in Facebook groups. The Charlottesville attacker, James Alex Fields, shared these memes twice in two months before his attack, and other planners of the Unite the Right rally shared these, too.

And lastly, at least six states had legislators who tried to pass bills that would protect drivers from civil suits if they hit protesters. Luckily, none of those passed.

Do we know if this meme became pervasive in the law enforcement community?

It’s hard to track that because those kinds of online conversations could be taking place in private groups. We do know that a lot of these memes are shared pretty widely.

There was one on the Daily Caller website and Fox News back in 2017 that got thousands of views. It was a compilation of video clips of protesters getting hit, and there was explicit encouragement. Mike Raust, a Daily Caller staffer, wrote: “Here’s a compilation of liberal protesters getting pushed out of the way by cars and trucks. Study the technique; it may prove useful in the next four years.”

The smaller claim I’m trying to make here is that an encouraging and radical environment online featuring memes and these kinds of discussions makes it more likely these kinds of attacks will happen.

Why, exactly? There are tons of conversations online that don’t lead to real-life action.

For two reasons. First, these memes and more celebrate attackers in vehicles.

Second, there’s an element of dehumanization going on. Fields, the Charlottesville attacker, said the protesters were anti-white communists. Such language makes it easier, I’d contend, for him to run through the demonstrators. If you look at the “run them over” Twitter posts over the last two days, people are calling the protesters animals or saying they’re happy such incidents are taking place.

You’re a terrorism analyst first and foremost, so surely you know that using vehicles to run over innocent people is becoming a popular method to conduct terror attacks. Do we know if there is any link between the rise in terrorists using vehicles and the American far-right praising vehicle attacks?

There are three major waves in the last year [of people and groups using] this tactic.

First, the Palestinian nationalists in Israel and in the occupied Palestinian territories from 2015 to 2017. Second, jihadists in North America and Western Europe in 2016 and 2017. And third, on the far-right from 2016 onward.

It’s difficult to draw a link between these terror attacks and their use in America. In my research, I write that the attacks are spreading within a single ideological community — so, among jihadists themselves and among far-right adherents themselves.

However, revenge might link one ideology to another. For example, ISIS claimed responsibility for a 2017 attack on London Bridge that involved stabbings and running people over with a van. About two weeks later, a man targeted Muslims coming out of a mosque in North London with a van. He was very clearly trying to copy the London assault.

Okay, but the use of vehicles to target innocent people still seems pretty new, right?

They’re not receiving direct communication from group leaders, but they’re likely getting these ideas from the radical online environment: ISIS and al-Qaeda are using magazines to encourage these kinds of attacks, and the far right is using memes.

I want to be clear about something: Are you saying that the police officers who ran over protesters with their vehicles were committing terror attacks?

It’s a real challenge to say so definitively, but a key thing is target-victim differentiation. The goal of terrorism is not just to hurt the person you’re attacking but to spread a broader message to others. I’m still waiting for more information to come out about each individual case [of police-involved vehicle-ramming incidents] to get a better sense of what the goal was.

What I’m seeing right now, though, is that the tactic itself is becoming very popular and it’s spreading.

But you do think it’s possible some of the people in vehicles who targeted protesters did so on purpose, perhaps inspired by the far-right memes?

I imagine that some were premeditated, but in general with far-right violence in the US we know that there are a lot of spontaneous attacks.

What’s important to do here is, as there’s more information about these individual cases, to understand if the drivers formed part of the environment that inspired the kinds of attacks and made it easier to do.

Again, with Fields in Charlottesville, he didn’t go to the rally specifically planning to ram into a crowd and kill someone. We know he had a troubling history; he was fascinated with Hitler and Nazis since he was a child and was involved with some online groups.

But when I went through his court documents and saw he was sharing these memes, what that suggested to me is that he was in an online environment that urged him to do something like that when he was in the car. His decision was likely spur of the moment.

Sorry to belabor the point, but I want to make sure I’m really clear on what you are and aren’t saying here: Do you think it’s possible far-right “run them over” memes played a direct role in some of the instances we’ve seen over the past week?

We’re seeing the memes widely circulated, and there’s also tons of comments online about doing such an action when presented with the opportunity. But, again, I’m still waiting for more information on each case before saying anything with certainty.

One thing I don’t fully understand: Why vehicles? There are tons of tools at an attacker’s disposal, like guns and bombs. How did vehicles become a recent weapon of choice?

The far right is taking advantage of the opportunity that protest repertoire evolved to include street blocking. They simply decided to target that.

But also lone actors can’t pull off sophisticated attacks. Vehicles are pretty easy: You just need a license and access to something to drive. In the most horrendous cases, those incidents involve a truck — like we saw in Nice and Berlin in 2016 — or on Sunday in Minnesota with the tanker truck driver.

Do you expect to see more vehicle attacks in the coming years, or even during these protests?

I can’t make any predictions, though I certainly hope we don’t see more. Unfortunately, we’re seeing more celebrations of these kinds of attacks online. Plus, we’re also going to see these protests go on for a while.