Pete Buttigieg claims victory in Iowa before the results are in 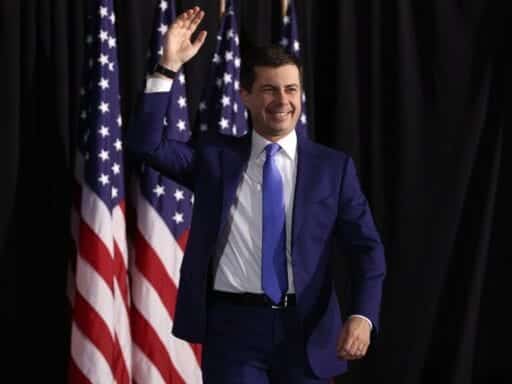 Sure, it’s good to be confident, but maybe Buttigieg would be wise to wait to declare himself the victor until he actually wins.

Pete Buttigieg took a victory lap after the Iowa caucuses on Monday — even though he hasn’t yet won them.

The Iowa outcome has been delayed due to a series of technical glitches and missteps by the Iowa Democratic Party that include trouble with a new app it’s using to calculate and report results at precincts across the state. That development put candidates in a bind: Generally, you give a speech at the end of the night and comment on the outcome. There was no outcome to comment on, but many of the candidates gave a speech anyway — including the former South Bend, Indiana, mayor.

“So, we don’t know all the results,” Buttigieg told a crowd of supporters at Drake University in Des Moines, acknowledging the awkwardness of the situation. “But we know, by the time it’s all said and done, Iowa, you have shocked the nation.”

He said his caucus performance, while still unconfirmed, meant “an improbable hope became an undeniable reality.”

Iowa, you have shocked the nation.

By all indications, we are going on to New Hampshire victorious. #IowaCaucuses

We still don’t know how the results shook out, but Buttigieg’s campaign released a memo and precinct-level data to back up their claims that the evening went well for him. His campaign said its precinct captains had reported full results for about 75 percent of the total precincts in the state, and estimated he had come away with 28 percent of the “state delegate equivalents” from the reported precincts. “Our data shows that Pete built a coalition that proves he is the best positioned to beat Donald Trump,” the memo reads.

It is true that Buttigieg probably got delegates in Iowa, a first for an openly gay presidential candidate, which is historic in itself. But it’s also true that we really do not know the Iowa results, and there’s no guarantee he won. Bernie Sanders, who was leading the Iowa polls ahead of caucus night, also struck a victorious tone in his speech.

A campaign spokesperson declined to comment on Buttigieg’s speech and the events of the evening and referred Vox to the memo.

As he took to the campaign trail in New Hampshire on Tuesday, Buttigieg maintained his optimistic tone, despite the uncertainty over the Iowa results. “Everything we know is extremely encouraging,” he told Jim Donchess, the mayor of Nashua, New Hampshire, who endorsed him on Tuesday morning.

“Although that glitch or whatever that caused this,” Donchess said.

“It is frustrating, but —” Buttigieg said before Donchess cut in and said the New Hampshire primary results should be more clear-cut. One would hope.

Buttigieg declaring himself the winner before actually winning was met with skepticism in some corners. And, predictably, his move sparked some backlash on Twitter and questions from reporters.

Pete Buttigieg is claiming victory with literally 0% of the vote in, trying to fix the Iowa Caucus like it was bread prices.

After his coffee with Nashua Mayor Jim Donchess, I asked Pete Buttigieg if it was premature to declare a victory in Iowa last night. He declined to respond. pic.twitter.com/QiiBilRP2C

It’s pretty Trumpian for @PeteButtigieg to declare victory in an election before the results are in.

Sure, it’s good to be confident, but it’s also probably wise to wait until the results are in before you declare victory.