Pete Buttigieg has been criticized for his handling of policing. He hopes his criminal justice plan will change that. 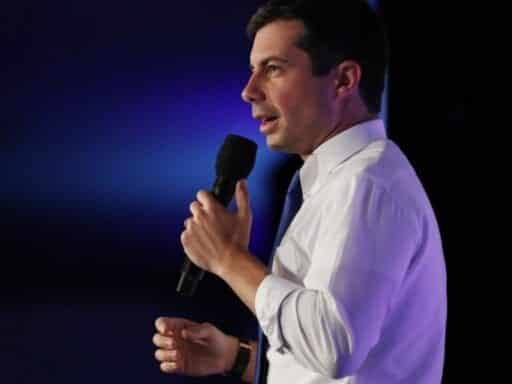 The South Bend mayor’s platform aims to present a realistic vision for the justice system—and show his commitment to police reform.

Democratic presidential candidate Pete Buttigieg released his criminal justice policy platform on Saturday, delivering a comprehensive plan for “fairness and justice” that keeps in line with many positions supported by justice reform advocates and his fellow 2020 competitors.

Buttigieg’s plan outlines a number of issues the current South Bend, Indiana mayor would address if he was elected, ranging from: reducing mass incarceration, police reform, marijuana legalization, juvenile justice and draining the school-to-prison pipeline, and additional supports to help people during and after incarceration.

“Rebalancing our criminal system and refocusing resources on areas like public health, economic opportunity, and alternatives to incarceration will dramatically reduce mass incarceration and racial disparities in the system,” Buttigieg’s plan, which was first shared with Vox on Friday, notes. “At the same time, it will keep communities safer and save money.”

It’s past time to recognize that our criminal justice system is unfair, and in many ways, racist. Today, I’m detailing a bold plan to transform the criminal legal system into one that truly secures justice and benefits all Americans. https://t.co/UWK1v4yipp

Buttigieg’s plan follows, and in many ways aligns with, other criminal justice proposals released by democratic candidates this cycle, including Joe Biden, Elizabeth Warren, Bernie Sanders, Kamala Harris, Amy Klobuchar, and Cory Booker. His plan is the second candidate criminal justice platform to be released this week; former Housing and Urban Development Secretary Julian Castro released his platform on Wednesday.

But the South Bend mayor, like Biden, Klobuchar, and Harris, faces an additional task with his platform — mitigating concerns that he has avoided significant criminal justice reforms in the past. For months, Buttigieg has been criticized for his handling of a June police shooting in South Bend, with the city’s black residents arguing that their mayor largely left the city’s police department to its own devices and failed to acknowledge the importance of police reform until it affected his campaign.

Buttigieg’s struggle to address those concerns is also likely connected to Buttigieg’s continued difficulty in building support with black voters, and for his somewhat dimmed national profile when compared to his standing earlier this year. Buttigieg has polled weakly with black voters at several points in the past few months, including over the summer where at least one poll found him at zero percent support with the group.

Buttigieg has sought to address this group’s concerns in other platforms as well. For example, his Douglass Plan for Black America, released in June, offered a number of proposals aimed at providing racial justice and reducing inequality, and also called for reforming policing. The release of his current plan — which builds off his Douglass Plan, a campaign spokesperson told Vox — comes on the same day as he expected to speak at a criminal justice candidate forum held at South Carolina’s Benedict College, a historically black college and university.

Buttigieg clearly hopes that his platform will help him with black voters, a group he has struggled with but needs to win the nomination. But the plan also helps to show Buttigieg’s larger interest in reforming various aspects of the justice system, and helping the communities that have been most impacted by it.

“This election, we have the chance to transform our criminal justice system into something that works for all Americans,” Buttigieg said in an NBC News op-ed published on Saturday. “This is not just an opportunity — it is an obligation.”

Like many of the other 2020 Democratic candidates, Buttigieg’s platform seeks to show that he understands the calls to end mass incarceration and demands for criminal justice reform that have been advanced by activists, the Movement for Black Lives, and prominent academics in recent years.

Buttigieg aims to do this by highlighting a number of different problems with the justice system, starting with the ways that it disproportionately affects those from low-income and black and Latinx communities. “We must recognize that our criminal system is unfair and racist in many ways,” the plan says shortly after referencing Botham Jean and Atatiana Jefferson, two black people shot by police inside their own homes since 2018. “This must change.”

The plan also includes a mix of proposals that would aim to reform the justice system at both the federal and local levels, recognizing the fact that the majority of those incarcerated in the United States are under state and local control. To address this, Buttigieg says that he would use federal funding to support localities and states that are working to reduce mass incarceration, which he wants to cut by 50 percent. This reduction would be accomplished through federal funds supporting alternatives to incarceration, reducing federal sentences for drug offenses and eliminating it for drug possession, and eliminating mandatory minimum sentences.

Buttigieg also calls for abolishing private federal prisons and reforming the bail system, which has been shown to trap poorer people unable to pay for their release. It’s worth noting though, that Buttigieg’s call for bail reform does not include an explicit call to eliminate cash bail, something that candidates like Elizabeth Warren, Bernie Sanders, and Kamala Harris do support.

Other topics also get attention in the plan, including calls to better support the nation’s public defenders, support for a constitutional amendment to abolish the death penalty, and ensuring that incarcerated people have access to federal supports like Pell Grants and Medicaid.

Buttigieg’s platform also includes a robust section on juvenile justice, calling attention to the ways that the justice system affects America’s children and teenagers. He calls for a federal program to assist families of incarcerated children, raising the age for a child to be tried as an adult, and investing in a federal funding to encourage states to close youth prisons.

But Buttigieg’s plan arguably pays the most attention to policing, likely in recognition of the criticism he has faced on this topic. The plan’s opening paragraphs include an acknowledgement that “so many Black and Latinx people see police more like an occupying force than a protective one,” and the policing section of the platform is longer than any other part of his proposal.

On policing, Buttigieg again supports measures that keep in line with what other Democratic candidates support: legislation to raise the legal standard for police use of lethal force; support for community policing programs; encouraging and supporting civilian oversight of police; a federal database tracking officer use of force; better officer training; and encouraging the use of body-worn cameras.

Buttigieg also calls for the development of a National Police Academy, which would be similar to other US service academies and would provide a college degree for attendees as they train to be police officers. Graduates of the program would then receive a bachelor’s degree and undergo additional training when they are assigned to a local police department. The program is intended to help address concerns about officer training, while also encouraging more people to consider policing as a career option.

While Buttigieg’s plan is undoubtedly comprehensive and covers a range of topics, it is also somewhat less ambitious than that of the most left-leaning candidates in the race like Warren and Sanders or Castro, who is the only candidate to release a standalone policing platform. But in many ways this adheres to how Buttigieg has framed his candidacy, presenting himself as someone who will push for fairness and justice, but also wants to focus on issues that he thinks his administration can accomplish.

It makes sense then, that much of Buttigieg’s platform focuses on things that the federal government can do, or the funding it can use as leverage when working with states.

However, it’s also worth noting that criminal justice is an issue where progress at the federal level has proven to be difficult to achieve. As Vox’s German Lopez has noted, it took years for the bipartisan First Step Act, a relatively moderate series of reforms that focused on reducing some over punitive sentences at the federal level, to pass in Congress. It will likely be much harder to get more ambitious reforms through the federal legislature.

At the same time, a growing body of research has shown that federal and state-level reform is needed, and that years of “tough on crime” policies have done more harm than good. A majority of Democratic voters say that they support the shift away from the policies seen in Congress’s 1994 crime bill, which has contributed to mass incarceration — and a candidate who avoided this topic would be swiftly dismissed by the electorate. Buttigieg wants to show that he understands this, and that his approach to justice reform is a smart, realistic plan for how the American justice system can be changed.

Ultimately, Buttigieg’s latest platform is a move that’s politically necessary for a candidate facing pressure to show that he will address the needs of communities of color who are subjected to overaggressive policing and incarceration.

Only time will tell if his effort will pay off.