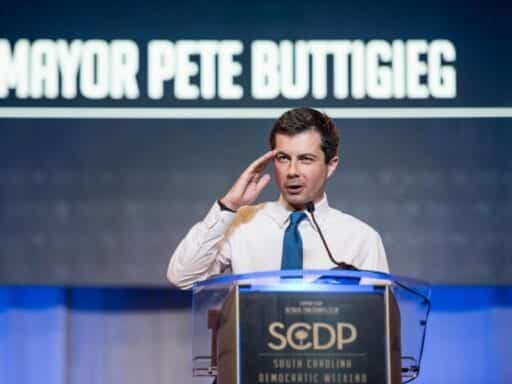 Buttigieg was met with protesters back home. He spoke of the shooting at the South Carolina Democratic convention.

South Bend, Indiana, Mayor Pete Buttigieg took the stage at the South Carolina Democratic Party’s convention Saturday and addressed difficulties he’s faced in the aftermath of a police shooting that has both exposed racial tensions in his home town and left him the subject of intense criticism, particularly from his black constituents.

“I’ve been off the campaign trail helping my community move through a tragic shooting of resident of our community by a police officer,” Buttigieg said. “It is as if one member of our family died at the hands of another.”

A South Bend police officer shot and killed 54-year-old black resident Eric Logan on June 16, responding to reports that a man was allegedly breaking into cars with a knife. The city is investigating the shooting. The police officer’s body camera was turned off at the time.

Buttigieg cancelled several 2020 campaign stops in the wake of the shooting, including a Democratic National Committee event and several fundraisers, to meet with community leaders and answer constituents’ questions. But he’s had a rocky homecoming. Protesters at home questioned the mayor’s dedication to the city’s racial tensions. Several black residents openly questioned whether Buttigieg cared more about winning the votes of black voters in places like South Carolina than he does about actually fixing the injustices in his city’s public offices.

Buttigieg has faced criticism over race and outreach to his black constituents before, in part for deciding to fire South Bend’s black police chief shortly after he took office. His critics were further incensed when the mayor replaced the chief with a succession of white officials.

That incident and the recent shooting have only amplified what has been a constant shadow over the mayor’s presidential campaign; his at time strained relationships with communities of color. Buttigieg has called outreach with minorities, “one of the most important pieces of homework for our campaign.”

Returning to the 2020 stump Saturday, in South Carolina — an early primary state with a strong African American Democratic voter base where more than 20 Democratic presidential candidates have been courting votes this weekend — Buttigieg attempted to reach out to black voters by translating the shooting into a presidental campaign message.

“My community is one that believes in safety and justice. We will heal and we will come stronger in the broken places,” Buttigieg said, pivoting back to a familiar speech about freedom. “Freedom is at stake if there is a veil of mistrust between community members and officers sworn to keep them safe.”

The shooting happened on a Sunday.

South Bend police officer Sgt. Ryan O’Neill engaged Eric Logan, who was partially in a vehicle in a parking lot at the Central High School Apartments in South Bend, after a 911 call about car break ins, the city’s prosecutor told local reporters. Logan reportedly exited the car and was approaching O’Neill with a knife, when O’Neill shot him. Logan died in the hospital shortly after. A lawyer for Logan’s family has said they plan to file a federal civil rights lawsuit against the city.

Buttigieg returned to the South Bend, from a campaign event in Florida the day of the shooting. Since, he’s met with community members, and city officials, as well as answered constituent questions. His presence hasn’t always been welcomed, though. Buttigieg was met with protests, as black residents questioned his dedication to their communities — particularly given his presidential ambitions.

“Are you really here because you care about blacks, or are you just here because you want to be the president?” one woman shouted at Buttigieg during a protest about the shooting, the New York Times reported.

“You’re running for president and you want black people to vote for you? That’s not going to happen,” another woman told the mayor, according to the report. Buttigieg responded, “Ma’am, I’m not asking for your vote.”

The incident has inflamed longstanding racial tensions in South Bend — some closely tied to what Buttigieg now hails as some of his biggest accomplishments on the stump.

Eight years ago, South Bend saw a 3.9 percent drop in population during the recession and was deemed a “dying city.” Buttigieg’s mayorship has reversed the city’s narrative — a record he says makes him qualified for the White House. But increasingly critics are asking: Who was the city revitalized for?

While much of South Bend is white, 40 percent of the city’s population is black and Latino, according recent Census estimates. Buttigieg’s “1,000 Houses in 1,000 Days,” a project to knock down vacant and abandoned homes to develop the town, has been criticized for disregarding the communities of color — something Buttigieg himself has acknowledged. The homes that were destroyed were primarily in black and Latino neighborhoods. That said, his message on the stump is that the project was finished ahead of schedule.

And in 2012, two months after taking office, Buttigieg fired black Police Chief Darryl Boykins for allegedly taping his white senior officers’ phone calls in an attempt to catch them using racist language, the New York Times reported. Critics argued Buttigieg, who is white, was took the side of white officers who accused the chief of wrongdoing. He’s replaced Boykins with two white police chiefs. At the time, some in the community called for Buttigieg to be impeached over his handling of the matter, South Bend’s WNDU reported.

With the recent shooting, Buttigieg is being forced to answer questions similar to those he faced in the aftermath of Boykins’ firing — this time, however, he is on a much bigger stage.

7 things everyone should know about Australia’s wildfire disaster
Netflix’s Dark Crystal prequel finds hope amid social collapse. With puppets.
The jarring contrast between Trump and Biden, in 3 moments from their competing town halls
The US always picks the World Bank president. It’s time for that to end.
Hotels are banning tiny plastic toiletries. Environmental experts think they can do more.
Trump’s new trade deal with South Korea, explained