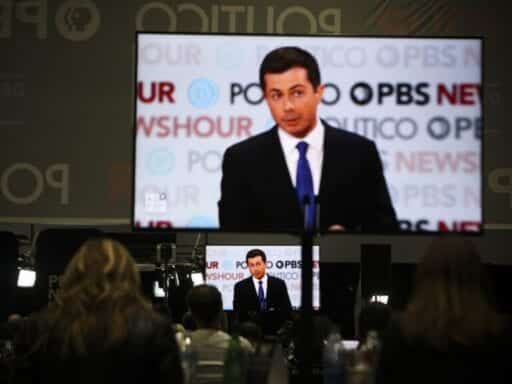 He wants to make amends for Trump’s family separations policy.

Pete Buttigieg vowed during Thursday night’s Democratic debate not only to financially compensate the almost 5,500 immigrant families who were separated under the Trump administration’s policies, but also to offer them a “fast track” to citizenship.

It’s a unique proposal in the Democratic field — one that immigrants advocates are currently fighting for in the courts and in Congress. The American Civil Liberties Union and others have filed lawsuits seeking financial damages against the US government on behalf of separated families.

Democrats in Congress, meanwhile, have already introduced legislation that would offer separated families a path to citizenship, which would also give them access to medical and mental health care to cope with the trauma of separation.

Buttigieg — one of the few candidates who has yet to release an immigration plan — is the first presidential candidate to bring up the proposal on the debate stage.

“They should have a fast track to citizenship because what the United States did under this president to them was wrong,” the South Bend, Indiana, mayor said Thursday night. “We have a moral obligation to make right what was broken.”

It’s not the first time that Buttigieg has discussed offering reparations for family separations: At a town hall in Iowa last month, he told voters that the US “owes something to kids in that situation” and should try to “make things right.”

The US government started testing out family separations in a small-scale pilot program in 2017 before expanding the policy across the border in the spring of 2018. Parents were sent to adult immigration detention facilities to await their deportation proceedings while their children, who cannot legally be kept in such facilities for longer than 20 days, were taken away and transferred to the Department of Health and Human Services’ custody.

Previous administrations would have previously released families together into the interior the US — a practice that President Donald Trump has long maligned as “catch and release.”

The US government knew that separating families would have long-term harmful effects on immigrant children. Commander Jonathan White, who previously oversaw the government’s program providing care to unaccompanied immigrant children, has testified before Congress that, beginning in February 2017, he repeatedly warned the officials who concocted the policy that it would likely cause “significant potential for traumatic psychological injury to the child.”

A September 2019 government watchdog report confirmed those effects, finding that immigrant children who entered government custody in 2018 frequently experienced “intense trauma” and those who were “unexpectedly separated from a parent” even more so.

Each child reacts to family separation differently. But psychologists have observed three main kinds of effects: disruptions to their social attachments, increases in their emotional vulnerability, and, in some cases, post-traumatic stress disorder, Lauren Fasig Caldwell, director of the American Psychological Association’s children, youth, and families office, said. Those symptoms could be only short-term or persist in the long run — or not even manifest until a child enters their teen years or adulthood.

Parents who have been separated from their children have also experienced their own kind of trauma, and could exhibit some of the same symptoms as children in that situation.

One Good Thing: Netflix’s The Queen’s Gambit makes chess mesmerizing. Really!
Just 6 states meet these basic criteria to reopen and stay safe
Twitter is tightening its rules against voting misinformation
Teen Titans’ Starfire is an orange alien. Racist “fans” don’t want a black woman playing her.
Exclusive: Amy Klobuchar’s plan to ensure rural areas aren’t devastated by coronavirus
Fox & Friends wants you to believe Trump would have G7 at Doral even if he didn’t own it